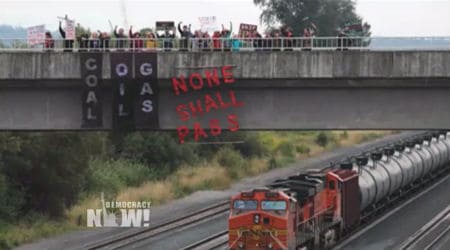 By Tim DeChristopher
The Guardian

In the face of governmental failure in addressing climate change, the climate movement has seen a dramatic increase of civil disobedience. The threat of jail is real to activists who use these tactics – as I learned first hand. But now activists now have a powerful form of defense: necessity.

For the very first time, US climate activists have been able to argue the necessity defense – which argues that so-called criminal acts were committed out of necessity – to a jury. The Delta 5, who blockaded an oil train at the Delta rail yard near Seattle in September of 2014, have been been allowed to use the defense in an historic climate change civil disobedience trial being heard this week. They said they acted to prevent the greater harm of climate change and oil train explosions.

Like all civil disobedience, this new wave of climate disobedience is an inherent critique of the moral authority of government. The necessity defense is an opportunity to elaborate that implicit critique into a fully developed legal argument for the responsibility of citizen action in the face of governmental failure.

In addition to gaining the permission to openly argue the necessity defense, the Delta 5 defendants have so far been winning the crucial legal maneuvers in the courtroom. The trial started with several motions from the prosecution to limit how the defense could present “sympathetic” evidence or anything related to their backgrounds. These motions were denied.

The judge has shown himself to be committed to a fully open trial of all the factors that would drive people to risk their bodies to stop fossil fuel expansion. This kind of openness is distressingly rare for civil disobedience cases in American courts. Why this particular judge, Anthony Howard, is breaking ranks in this climate trial is unknown, but I suspect it may have something to do with the fact that he is young enough that he will still be alive in 2050.

This willingness to weigh deep questions of justice in the courtroom is already paying off with a thought-provoking trial. The jury selection developed into an insightful conversation about civic engagement, protest and how to express one’s disagreement with the government.

This work of arousing consciences is an essential feature of good civil disobedience. Just by participating in the selection process, 60 potential jurors were pushed into a thoughtful discussion about the role of protest and challenging unjust power.

One of the critical dynamics that emerged in the jurors’ discussion on the first day was the difference between protest that uses force to intimidate compared to protest that uses one’s own vulnerability to awaken a community. The Delta 5 clearly fall into the latter category, but the prosecution used references to the Ku Klux Klan and abortion clinic bombers to suggest that the activists were relying on intimidation. This crucial dynamic will likely continue to be developed as the trial progresses.

But even as the state tries to paint the defendants as nefarious, the activists are establishing their moral advantage. The prosecution can tell by the media attention and standing-room only crowd that these activists have power, but like most government officials, this prosecutor seems to only understand coercive power.

As he tries to put them in a box into which they don’t fit, the principled position of the activists demonstrates the potential of power rooted in love rather than force. The activists bring a vision of justice that shames the mere legalism of the state.

Around the globe climate movements are trying to build power. Some of those are trying to build power based on an old model from a dying empire. Here, in the trial of the Delta 5, the climate movement is building a new kind of power, grounded in interdependency and wielded through vulnerability. Our rapidly evolving and unstable world demands no less.

Tim DeChristopher is the co-founder of Peaceful Uprising and founder of Climate Disobedience Center. He was imprisoned for disrupting an illegitimate Bureau of Land Management oil and gas auction in December of 2008.