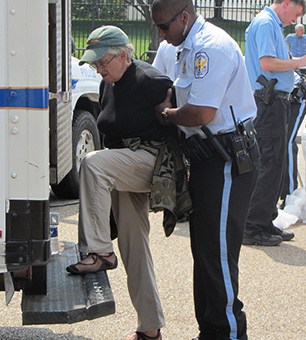 Two years ago I was among more than a thousand people who committed civil disobedience at the White House to oppose the building of the Keystone XL pipeline. Since then many more have been arrested around the country, often blocking the actual pathway along which the Keystone XL is being constructed. Nearly 70,000 people have vowed to risk arrest if the State Department recommends that the president approve the pipeline.

All along I believed that these actions were justified, even though they meant breaking the law. After all, leading NASA climate change specialist Jim Hansen says that the Alberta tar sands, which the pipeline will carry, “must be left in the ground” because “if the tar sands are thrown into the mix it is essentially game over” for a viable planet.

Since being arrested at the White House, my perspective on the nature of such actions has changed. After learning about a fundamental principle of American law known as the public trust doctrine, I have come to believe that the U.S. government and other governments around the world are violating their own most fundamental responsibilities to their own people when they allow fossil fuel producers and users to devastate the earth’s atmosphere with greenhouse gases.

Governments will no doubt continue to treat protesters who block pipelines, coal mines and power plants as criminals. But such governments come into court with dirty hands, stained by their dereliction of the duty to protect the common inheritance of their own people.

The public trust doctrine has roots and analogues in ancient societies from Europe to East Asia to Africa, and from Islamic to Native American cultures. It was codified in theInstitutes of Justinian, issued by the Roman Emperor in 535 A.D. The Justinian code defined the concept of res communes (common things): “By the law of nature these things are common to mankind — the air, running water, the sea and consequently the shores of the sea.” The right of fishing in the sea from the shore “belongs to all men.” The Justinian code distinguished such res communes from res publicae, things which belong to the state.

Based on the Justinian Code’s protection of res communes, governments have long served as trustees for rights held in common. In American law this role is defined by the public trust doctrine, under which the state serves as trustee on behalf of the present and future generations of its citizens. Even if the state holds title to a given resource, the public is the “beneficial owner.” As trustee, the state has a fiduciary duty to the owner — a legal duty to act solely in the owners’ interest. This principle is accepted today in both common law and civil law systems in countries ranging from South Africa to the Philippines and from the United States to India.

International law, furthermore, recognizes regions that lie outside of the political reach of any one nation state — specifically, the high seas, the atmosphere, Antarctica and outer space — as “global commons” governed by the principle that they are “the common heritage of humankind.” But there has been no effective vehicle for asserting our right not to have our common heritage destroyed.

Suing for an inheritance

In a series of suits and petitions on behalf of young people in 2011, the Atmospheric Trust Litigation Project brought legal actions to all 50 U.S. states and the federal government demanding that they fulfill their public trust obligation to protect the atmosphere as a common property. Sixteen-year-old Alec Loorz, founder of Kids v. Global Warming and lead plaintiff in the federal lawsuit, said, “The government has a legal responsibility to protect the future for our children. So we are demanding that they recognize the atmosphere as a commons that needs to be preserved, and commit to a plan to reduce emissions to a safe level.”

The suits seek declarative judgment applying the public trust doctrine to the earth’s atmosphere. They ask courts to issue injunctions ordering federal and state governments to reduce carbon emissions to fulfill their duty to protect it. Similar suits are projected for countries around the world. While the courts have turned down some of these suits, in 2012 a federal district court ordered that a case brought in New Mexico go forward.

There is precedent supporting the public trust doctrine in the United States. The U.S. Supreme Court decided, in a leading public trust case at the end of the 19th century, that the state’s power resulted from “common ownership” of the public trust asset. That power, the decision stated, should be exercised as “a trust for the benefit of the people,” not as a “prerogative for the advantage of the government, as distinct from the people.” The ownership is “that of the people in their united sovereignty.”

The trustee has an active duty of vigilance to prevent decay or “waste” — permanent damage to the asset. If the asset is wasted in the interest of one generation of beneficiaries over future generations, it is in effect an act of generational theft.

When a trust asset crosses the boundaries of sovereign governments, all sovereigns with jurisdiction over the natural territory of the asset have legitimate property claims to the resource. Thus, all nations on Earth are “co-tenant trustees” of the global atmosphere. As co-tenants they have an undivided right to possess the property. But they also have a duty not to allow the waste of the common property.

As compelling as the logic of such an argument may be, it is easy to imagine that many American courts will refuse to force governments to meet their obligations. In a brief to dismiss the Kansas suit, lawyers called the claim “a child’s wish for a better world,” which is not something a court can do much about. “No order issued by the District Court of Shawnee County can hold back global warming, any more than King Canute could order the tide to recede.”

The sad fact is that virtually all the governments on earth — and their legal systems — are deeply corrupted by the very forces that profit from destroying the global commons. These governments exercise illegitimate power without regard to their obligations to those they claim to represent, let alone to the future generations to whom they are mere trustees.

Protecting the global commons is not just a matter for governments. The failure of governments to protect the global commons is currently driving the climate protection movement to turn to mass civil disobedience, as witnessed by the campaigns against the Keystone XL pipeline, mountaintop-removal coal mining and coal-fired power plants. Looked at from the perspective of the global commons, however, these actions are far from disobedient. Indeed, they embody the effort of people around the world to assert their right and responsibility to protect the global commons. They show people acting in an emergency situation on an evident necessity. They represent people stepping in to provide law enforcement where corrupt and illegitimate governments have failed to meet their responsibility to do so.

Legal rationales have played a critical role in many nonviolent movements. They strengthen participants by lending a sense of clarity that they are not promoting personal opinions by criminal means but rather performing a public duty. And they strengthen a movement’s appeal to the broader society by presenting action not as wanton lawbreaking but as an effort to rectify governments and institutions that are themselves in violation of the law.

For the civil rights movement, the Constitution’s guarantee of equal rights meant that sit-inners and freedom riders were not criminals but rather upholders of Constitutional law. For war resisters during U.S. wars from Vietnam to Iraq, the international law that since the Nuremberg trials has forbidden war crimes has defined civil disobedience as an obligation under international law. For those who took part in the nonviolent revolution that overthrew communism in Poland, their struggle was not criminal sedition, but an effort to implement the international human and labor rights laws ratified by their own government.

The legal obligation of governments to protect the public trust can play a role similar to governments’ obligation to protect human rights and eschew war crimes. Those who perpetrate climate change, and those who allow them to do so, should not be able to claim that the law is on their side. Those who blockade coal-fired power plants or sit down at the White House to protest the Keystone XL pipeline can — and should — insist that they are simply exercising their right and responsibility to protect the atmospheric commons they own along with all of present and future humankind.

Future climate protesters can proudly proclaim that they are actually climate protectors, upholding the law, not violating it. Nobody should expect American judges to start acquitting protesters on public trust grounds any time soon. But juries that try climate protesters should keep in mind that they have the right and the responsibility to acquit those they believe have violated no just law.

Jeremy Brecher is a historian and the author of numerous books on labor and social movements.