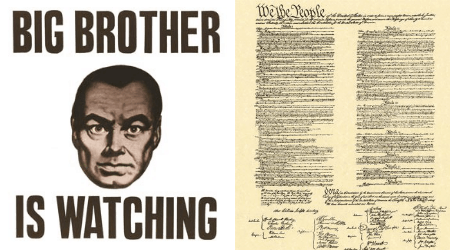 Around 1:30 a.m. Saturday, there was a seismic shift in the U.S. Congress. As the Senate deadlocked over what to do about several expiring provisions of the Patriot Act, it became clear that political momentum had moved away from surveillance and secrecy toward freedom and privacy.

In a rare and theatrical overnight session, Senate Majority Leader Mitch McConnell tried and failed to reauthorize or even briefly extend the Patriot Act’s surveillance powers before senators left Washington for their weeklong holiday break. At every turn, he was blocked by a bipartisan group of civil libertarians and surveillance skeptics led by presidential hopeful Sen. Rand Paul, a Republican from Kentucky, and Sen. Ron Wyden, a Democrat from Oregon. Their main target was Section 215, which the government argues allows the National Security Agency to collect, store, and analyze Americans’ phone records and other intimate information in bulk.

“This is a debate about whether a warrant with a single name of a single company can be used to collect all of the phone records of all of the people in our country,” Paul said from the floor. “Our forefathers would be aghast.”

He was right, and we agree, which is why the American Civil Liberties Union and the Tea Party Patriots are pushing senators who are uneasy with NSA dragnet spying to hold the line and, in the absence of far-reaching reform, allow the provisions to expire on June 1.

McConnell has already promised that he will try again on Sunday to keep the surveillance status quo, and his allies will probably use scare-tactics to help him get his way. But would-be reformers should take comfort in the fact that the public and the courts are on their side.

By a nearly 2-to-1 margin across all ages, ideologies, and political parties, Americans believe that the Patriot Act should be scaled back to limit government surveillance and protect Americans’ privacy, according to recent ACLU polling. The public’s disapproval of the call records program helps explain why the NSA, two White Houses, and a small group of congressional enablers tried to keep the program secret for so long. They understood that if the American people and their representatives truly understood the extent of the NSA’s domestic spying, the calls for reform would be immediate and sustained.

If that isn’t convincing enough, senators still on the fence should listen to the courts. Earlier this month, the U.S. Court of Appeals for the 2nd Circuit found that Section 215 didn’t authorize the NSA’s call records program. Instead, the judges unanimously found that the NSA’s mass surveillance was “unprecedented,” “unwarranted,” and, ultimately, unlawful. With the expiration of Section 215 near, however, the 2nd Circuit decided to let Congress decide whether to reauthorize it, revise it, or let it die.

Congress never meant to give such extreme powers to the NSA, and two government review groups have confirmed that the call records program has never made a concrete difference in a terrorism investigation. Even the Department of Justice’s inspector general found that Section 215 had never led to a major case development. Yet the ineffective and invasive program could be revived if McConnell and his kettle of surveillance hawks win out over reason and political courage.

When the 2nd Circuit recently took a hard look at the government’s case for why the call records program was lawful, one argument that the judges knocked down was that Congress explicitly authorized bulk collection and storage. Rather, they concluded that “knowledge of the program was intentionally kept to a minimum, both within Congress and among the public.”

Today, however, no senator can claim ignorance of how NSA surveillance treads on our privacy. They can’t say, “It’s only metadata,” when even the NSA’s former top lawyer has said: “Metadata absolutely tells you everything about somebody’s life. If you have enough metadata, you don’t really need content.”

Senators have a historic opportunity to uphold, or resuscitate, the basic American belief that liberty cannot survive when government flouts its limits. On Sunday, those who represent us must either vote for Big Brother or vote for the Bill of Rights. They can’t have it both ways.