Chomsky, Snowden, Greenwald on Privacy in the Age of Surveillance (Video) 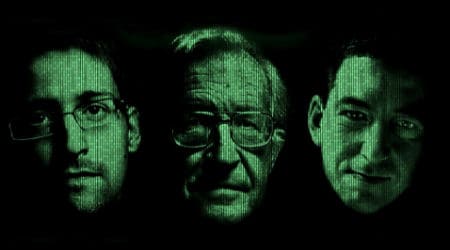 What is privacy and what is an individual’s right to it?

That is the question that renowned linguist and MIT professor Noam Chomsky, National Security Agency (NSA) whistleblower Edward Snowden, and Intercept co-founding editorGlenn Greenwald sought to answer on Friday evening as the three (virtually) shared a stage for a panel discussion at the University of Arizona in Tuscon.

Coming amid the FBI’s public battle against Apple as well as days after the bombings in Brussels last week, which have spurred another round of calls for heightened security and surveillance, the conversation challenged the rhetoric that national security requires that governments can access individual communications.

“Should our government be omniscient?” asked Snowden, who took part in the discussion via satellite from Russia. “That has value, of course, in thwarting nefarious and criminal behavior. But the public has a right to know if the government is going to be omniscient. As it stands, this decision has been made by a few people behind closed doors. That is the problem.”

“There are systems of unaccountable power—some of them private, some of them governmental,” Chomsky stated, regarding the growing commercialization of the internet. “They don’t care about democracy and have shaped and molded the system. Technology is neutral. It can be used for good or evil. It’s up to us to determine what the future holds.”

When asked about the FBI’s ongoing effort to force Apple to break into one of the suspected San Bernardino shooter’s iPhones, Greenwald stated that the bureau’s case against the tech company is “pure deceit.”

“[The government] wanted to create a precedent,” Greenwald said. “Apple would be forced into involuntary labor to create a backdoor anyone could use. The NSA’s motto is: Collect it all. Not collect a lot of it. It wants to be able to collect and store all communications between humans in the world and eliminate privacy in the digital age.”

Greenwald continued: “The world Orwell is talking about in ‘1984’ is not one in which people are being watched all the time. That world is one in which people could be watched at any moment. One in which there never is a moment when you can communicate beyond the reach of the surveillance arm of the government. That is the FBI case against Apple.”

Snowden refuted the notion that governments need to be able to access encrypted data to prevent attacks, such as the one in Brussels. He said that the NSA already has that information and that such attacks are “preventable.”

“The NSA gets around encryption every day of the week,” Snowden joked. “And twice on Sundays.”

Chomsky concluded by saying that what Snowden and Greenwald have done, exposing the breadth of NSA spying, “is great for democracy, and they should be lauded for that.”

“You cannot shine the light in dark places enough,” said Greenwald. “We cannot start enough debates on the abuse of power, the value of privacy. No matter how powerless you think you are in the face of injustice, all individuals have the power to stand up to the most powerful institutions.”

You can watch the two-hour panel discussion, which was organized by the Center for Democracy and Technology (CDT), below: