Charges Dropped Against Amy Goodman–No Thanks to Corporate Media 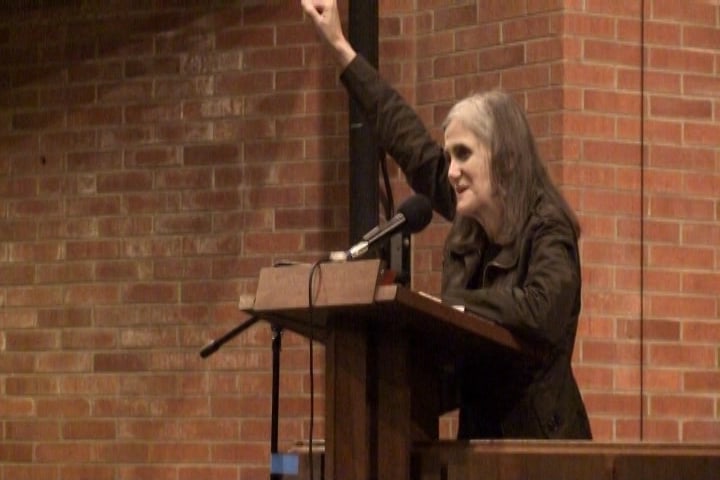 Amy Goodman at a PPJC event.

North Dakota District Judge John Grinsteiner stood up for the First Amendment by dismissing “riot” charges against Democracy Now!’s Amy Goodman (Democracy Now!,10/17/16). That’s more than you can say for most of Goodman’s corporate media colleagues.

After Goodman reported on the use of pepper spray and attack dogs against Native American demonstrators opposing the construction of the Dakota Access Pipeline (Democracy Now!, 9/4/16), North Dakota State’s Attorney Ladd Erickson charged her with criminal trespassing. Realizing that he couldn’t make that charge stick, he sought to charge her instead with participation in a “riot”—based on Erickson’s contention that Goodman “was not acting as a journalist” because “everything she reported on was from the position of justifying the protest actions” (FAIR.org, 10/15/16).

Few corporate media journalists took note of a fellow reporter being charged with trespass for doing her job (FAIR.0rg, 9/15/16). When the prosecutor upped the ante by trying to build a criminal charge based on his perception of a reporter’s point of view, this still did not provoke much attention—let alone outcry—from outlets whose lucrative commercial enterprises are dependent on the protection of the First Amendment.

A handful of journalists at commercial outlets did weigh in to defend Goodman.  Will Bunch, columnist for the Philadelphia Daily News (Philly.com, 10/16/16), wrote that “the First Amendment was created to prevent exactly this: the jailing of a writer for his or her political point of view.” The LA Times‘ Michael Hiltzik (10/17/16) called out the charges as “an attempt to quash legitimate news reporting.” Matt Taibbi in Rolling Stone (10/13/16) noted the odd fact that Erickson is an avowed fan of Taibbi’s work—but nonetheless urged him to stop prosecuting Goodman, saying she is “as close to the ideal of what it means to be a journalist as one can get in this business.”

That’s about it for journalists in the corridors of corporate media who defended Democracy Now!‘s reporter. A few others took note of the threat she was under; AP‘s James MacPherson and Blake Nicholson wrote a piece that was picked up by    outlets like the Minneapolis Star Tribune, Idaho Statesman, Fresno Bee and Arizona Daily Star. Public Radio International‘s The Takeaway (10/17/16) ran a 12-minute interview with Goodman.

A few new media outlets covered the riot charges, like Jezebel (10/15/16) and TechCrunch(10/16/15). Some journalism sites also weighed in, like The Wrap (10/15/16) and Poynter(10/17/16)—though Poynter’s James Warren buried the item under ten other items, heading his one-paragraph report “Post-Pipeline Protest Hoopla,” a headline that may accurately convey the degree of importance corporate journalism accords to First Amendment threats to alternative reporters.

That would explain why people who wanted to be informed about an independent journalist facing criminal charges based on her presumed opinions mostly had to go to overseas outlets (BBC, 10/17/16 ; Independent, 10/17/16) or to alternative sources likeThe Nation (10/15/16) and  Common Dreams (10/15/16).

Commercial journalists are rightfully alarmed by Donald Trump’s increasingly shrill attacks on the press, which he asserts has an

agenda is to elect crooked Hillary Clinton at any costs, at any price, no matter how many lives they destroy…. For them, it’s a war. And for them, nothing at all is out of bounds. This is a struggle for the survival of our nation. Believe me. And this will be our last chance to save it.

This kind of apocalyptic rhetoric is an invitation to violence against reporters, and it needs to be opposed. But the only effective response to threats against freedom of the press is solidarity; if those with the biggest megaphones don’t stand up to the already-occurring efforts to clampdown on the press, someday they may be writing poems that begin, “First they came for the Pacifica reporters, and I didn’t say anything, because I wasn’t a Pacificareporter….”

If there are any regretful reporters at the New York Times, Washington Post, the broadcast or cable news outlets, or any of the other media properties that neglected to cover Goodman’s case when she stood accused of thoughtcrime, they can make up for it by reporting on the still-pending case of documentary filmmaker Deia Schlosberg, who is facing up to 45 years in prison based on three felony counts derived from her reporting on the Dakota Access protests (Reuters, 10/13/16). The First Amendment you save may be your own.