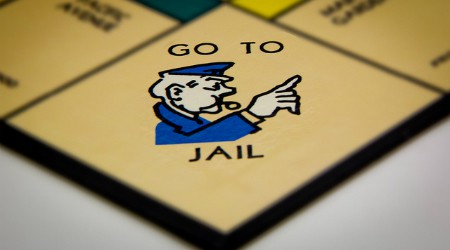 Before a Minnesota police officer fatally shot him, 32-year-old Black man Philando Castile was pulled over 31 times and slapped with 63 traffic charges. Several municipalities, like Ferguson, Missouri, have debtors’ prisons that target and keep working-class people of color in a perpetual cycle of debt to finance their courts. California cities are no exception. A report by the civil legal aid group Lawyer’s Committee for Civil Rights of the San Francisco Bay Area (LCCR) shows that rates of driver’s license suspensions due to unpaid traffic fines are significantly higher for Blacks and Latinos, particularly those in lower-income neighborhoods.

If someone fails to appear (“FTA”) in court for a traffic violation or fails to pay (“FTP”) an infraction ticket or drives with a suspended license, they are committing a misdemeanor in California. This can occur even if the license suspension results from inability to pay a fine. California law allows police to “arrest, book, and jail people for traffic court warrants or the criminal misdemeanor offense of driving with a suspended license” when those people cannot afford to pay a ticket fine. Conviction can lead to six months in jail, several years of probation, and exorbitant fees.

Once those infractions are in traffic court, huge fees are tacked on. The fees include state penalty assessment, conviction assessment, and others. These fees can increase a US$100 fine to US$490 or, if the first payment deadline is missed, as high as US$815.

Mapping data from Los Angeles and San Francisco Counties show that license suspension rates and arrests for FTA/FTP and driving with a suspended license are far higher in neighborhoods with larger Black and Latino populations, higher poverty rates, and lower household income.

This intense, racialized policing exists despite there being “no documented difference in driving behavior” between whites and nonwhites. Rather, implicit and explicit racial biases “clearly play a role in who is stopped,” according to the report. Studies have shown that whites and many Americans, associate Black people with criminality and perceive them to be more violent and criminal than other races.

The story of Velia Duenas, a 25-year-old Latina single mother of two daughters currently living between Bakersfield and Los Angeles, reveals how this system damages a person’s life. As a teenager, Duenas racked up four to five truancy tickets, mostly for skipping school. Duenas, her single mother, and three siblings struggled to survive on welfare. Her mother offered to pay her tickets. However, Duenas did not want her mother to pay for her mistakes so she refused her help. Duenas tried to pay her tickets through a payment plan but the juvenile center wanted her to pay a lump sum per ticket. Her tickets range from US$200 to $845 each, which means it would take US$1,000 to US$1,500 to pay off all the citations she racked up as a minor.

Because of the unpaid tickets she got as a minor, Duenas is unable to get a driver’s license. She explained, “When I hit 17, when I actually started to get behind the wheel, I went to the DMV, tried to get a driver’s license, tried to fill it out. I wasn’t able to because of what I owed for my juvenile record.” As a result, her license was put on hold and she was never able to take the test. On top of the hold, her license was suspended due to the number of times police caught her driving without a license.

The hold from her juvenile record is lifted but what is holding Duenas back are four to five unpaid traffic tickets for driving with a suspended license. Since Duenas cannot afford to pay those traffic tickets, she had no choice but go to jail. Of the four to five tickets she got, she served jail time for three of them. She recently spent 39 days in jail for driving with a suspended license. Jail was “horrible,” said Duenas. “I was always grew up saying to myself that I would never step foot in there [jail] because of my father being there, growing up, in and out. To be in there for such a minor issue, I felt like I was going crazy. I mean, it sucks. It was depressing for me.”

Legally, traffic court defendants have the right to use economic hardship and inability to pay as a defense for not paying a ticket, which she used. However, the judge rebuked her, arguing that if she can pay for a cell phone then she can afford to pay her exorbitant tickets.

Even though Duenas’ step-father, a truck driver, offered to get her a truck driving job alongside him, she can’t because she does not have a license. This is among the many obstacles placed on a person’s life if their license is suspended. Not having a driver’s license makes it difficult to go to work or run necessary errands. In areas where public transportation is almost nil — such as Bakersfield, where Velia sometimes lives — that can be next to impossible if one does not have access to a car. Plus, many jobs and job-training programs require that employees have driver’s licenses to obtain full time, steady employment. Some private employers screen out applicants who do not have driver’s licenses.

Dana Isaac, the Thurgood Marshall Fellow at ICCR whose work focuses on traffic courts and license suspensions, told AlterNet that many tickets that go through traffic court are not just for minor driving violations but also “quality-of-life citations”. These can include “offenses for jaywalking, for littering, for riding public transportation without a transfer depending on who issues the ticket, a lot of camping, which we see with a lot of homeless clients. It really involves a lot of issues and tickets that can be issued essentially as poverty offenses,” she explained. San Francisco’s sit-lie ordinance prohibits sitting or lying down on a public sidewalk, which effectively criminalizes homeless people for sleeping in public.

Therefore, not everyone who goes through traffic court is there for drunk driving or other dangerous behavior. Many are there for just being too poor.