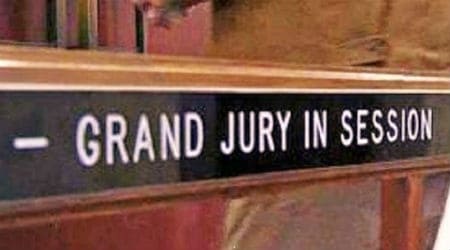 California this week became the first state to ban the use of secret grand juries when deciding whether to indict police officers in cases of deadly force. The bill, signed by Gov. Jerry Brown on Tuesday, was a response to the unrest that followed the grand jury decisions in Ferguson, Missouri, and in Staten Island, New York, not to indict the officers who killed Michael Brown and Eric Garner.

“The use of the criminal grand jury process, and the refusal to indict as occurred in Ferguson and other communities of color, has fostered an atmosphere of suspicion that threatens to compromise our justice system,” state Sen. Holly Mitchell (D-Los Angeles), who authored the bill, said in a statement.

The issue of accountability in the criminal justice system, especially when a police shooting takes place, has been at the center of many of the protests that have occurred across the country in the past year. That’s partly because the grand jury process is secret and court records associated with it are sealed. (In Ferguson, prosecuting attorney Robert McCulloch decided to release the grand jury documents to squelch accusations of bias. The Department of Justice ultimately released its own investigation agreeing with the grand jury’s decision not to indict Darren Wilson, the police officer who shot Brown). The grand jury proceedings are kept secret in order to protect witnesses, who some say wouldn’t come forward if the documents were subject to open record; however, critics contend that the secrecy surrounding grand juries only protects the police and does nothing to foster justice.

Following the death of Eric Garner last summer and the grand jury decision not to indict Daniel Pantaleo, the NYPD officer responsible for his death, the New York chapter of the American Civil Liberties Union began an ongoing battle to make public the minutes and records of what transpired in the grand jury. The ACLU’s request for the records was rejected by a Staten Island judge in March, and the group’s May appeal was again rejected last month.

“When a grand jury makes a decision about whether or not to indict an officer in the killing of a New Yorker, the public has a right to know why,” Donna Lieberman, executive director of the New York Civil Liberties Union, said in a statement. “There is a deep and well-founded suspicion of the criminal justice system partly because no one has been accountable for the death of Eric Garner and the community doesn’t know why.” The group plans to appeal the decision again.

The new California law leaves it up to the prosecutor to decide whether to charge a police officer with using deadly force, a change that many hope will lead to more transparency and accountability.

Last fall, Bowling Green State University criminologists released research showing that between 2004 and 2011, only 41 police officers were charged with murder or manslaughter for on-duty killings. During that same seven-year period, however, the FBI classified 2,718 police killings as justifiable homicides.

“It’s very rare that an officer gets charged with a homicide offense resulting from their on-duty conduct even though people are killed on a fairly regular basis,” Philip Stinson, an assistant professor of criminal justice at Bowling Green who received a federal grant to study arrests of police officers, told the Wall Street Journal.

In addition to the grand jury bill, Brown signed a measure that ensures the right of civilians to record or photograph the police in public areas. In the past, some civilians who have done so have been arrested, or told to stop, for obstructing justice.

“With the stroke of a pen, Gov. Brown reinforces our First Amendment right and ensures transparency, accountability and justice for all Californians,” state Sen. Ricardo Lara (D-Bell Gardens), the author of the bill, said in a statement. “At a time when cellphone and video footage is helping steer important national civil rights conversations, passage of the Right to Record Act sets an example for the rest of the nation to follow.”