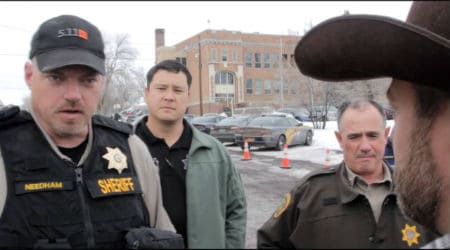 The verdict is completely absurd.

Eight months after the nation watched an armed militia take over a wildlife refuge in Oregon to protest federal land ownership, a jury has come back and said that the militia members are “not guilty.” This includes not guilty of a charge that describes what everyone knows these militants did, considering that they live–streamed themselves doing it: conspiracy to prevent Bureau of Land Management and US Fish and Wildlife employees from doing their jobs at the wildlife refuge.

Again, this is literally what they did. They armed themselves and took over a wildlife refuge, preventing federal workers from going into the facility and doing their jobs. Ammon Bundy, the militants’ leader, even participated in interviews in which he called for more people to join him in his cause.

In fact, the militants staged their protest because they want to get federal employees out of these lands. The Bundys and other militants would like to see the federal government give up federal lands to locals. This, they argue, would free the territory of environmental regulations that they see as burdensome — but are meant to preserve endangered animals and nature — and enable more exploitation of the lands’ resources by allowing, for example, more unfettered farming, mining, and hunting.

Yet a jury found them not guilty.

It is impossible to ignore race here.