Building on the Syrian Truce 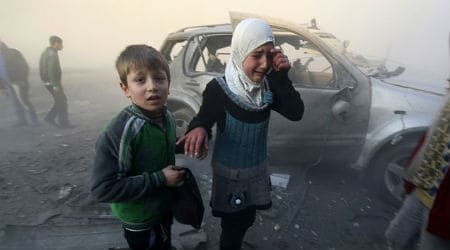 A common reaction to the first couple of days of the partial cessation of hostilities in Syrian civil war was surprise at how well the truce had held up so far. There earlier had been ample grounds for pessimism about whether any cease-fire in this very messy conflict would take hold at all. But if the pessimism at this admittedly early stage of the truce has been shown to be excessive, this probably is partly due to insufficient appreciation, among armchair strategists elsewhere who are willing to continue the fight to the last Syrian moderate, of the war weariness of many of those actually fighting the war. Another probable reason is misperception of Russian motives and misjudgment of how much leverage over the Assad regime Russia’s substantial effort on its behalf has given Moscow.

Somewhat similar misperceptions undoubtedly apply as well to the Syrian regime’s other major backer, Iran. The conventional belief about Iran supposedly being bent on destabilizing the region is bound to involve misperception when Iran instead is, as it has been doing in Syria, trying to defend an incumbent regime and the status quo. (Iran reportedly is now withdrawing most of the troops it had in Syria.)

Some of the grounds for pessimism about the truce are nonetheless valid, and there are likely to be substantial violations in the weeks ahead, some of them greater than the ones that have occurred so far and some of them coming in bursts that will make it appear that the agreement is falling apart. In addition to the usual reasons, based on continuing distrust and animosity, that few cease-fires are observed perfectly, the Syrian conflict has the added complication of the truce not applying to ISIS and the Al-Qaeda-affiliated al-Nusra organization, and of other opposition groups being intermingled with al-Nusra on some of the Syrian battlefields. An important objective in the weeks ahead will be not to let the perfect be the enemy of the good. The fact that a partial cease-fire has taken hold at all indicates that there is something to build upon.

For the United States, along with other members of the international Syria support group, to aid the building will require getting farther away from a couple of persistent mindsets. One is the dogma that Assad must go. However much one can agree on the loathsome aspects of that regime and on the concept that Bashar Assad would not be a prominent part of any Syria that would enjoy indefinite stability and internal legitimacy, the near term must be dealt with before the long term. And in the near and mid term, the available alternatives are worse, in terms of instability and opportunities for extremism, than continuation of that regime in some form in the part of Syria it controls. The other mindset to shed is the notion that any initiative, action, or grabbing of the spotlight in this arena by Vladimir Putin and the Russians is ipso facto a setback for U.S. interests.

The best feasible outcomes for Syria in the foreseeable future, alongside continued armed opposition to extremist groups and especially ISIS, would have the nature of a frozen conflict. Frozen conflicts are unsatisfying and offensive to the principles of national unity and territorial integrity, but they sometimes are better than the available alternatives. They can lead to enough long-term stability to get a conflict out of the headlines and off policy-makers’ front burner. Think, for example, about some of the frozen conflicts along Russia’s periphery. How much have you read in the newspaper lately about the conflict between Georgia and Russia—and the fact that Russia still occupies a couple of chunks of Georgian territory? Or more to the point, how much have you read about that frozen conflict causing any bigger or broader problems?

The main underlying principle in addressing the Syrian problem and trying to nurse a fragile truce into being something a little less fragile is that it is the war itself, far more than any particular internal political outcome or distribution of power, that has made Syria a problem for international security, with threats of spreading regional instability and far-flung violent extremism.