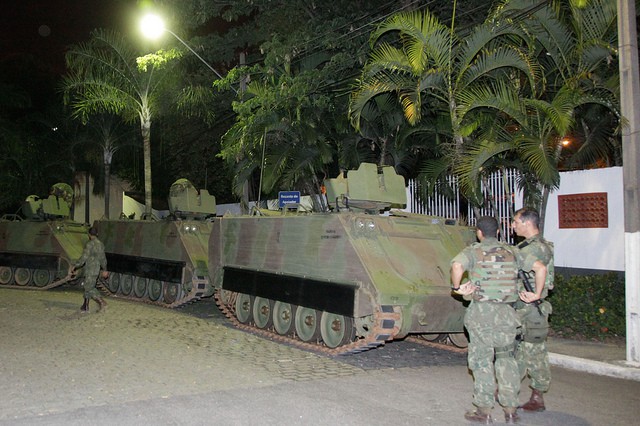 In traveling to Brazil to write a book about Brazil and the 2014 World Cup, I learned one thing if nothing else: a favela is not a slum. That is why the weekend’s Associated Press breaking news about major military incursions into the Rio favelas set off a carnival of alarm bells. The AP headline reads, “BRAZIL POLICE PUSH INTO RIO DE JANEIRO SLUMS.” The actual deployment of 1,400 heavily armed police and Brazilian Marines was into Rio’s Maré favela, home of 130,000 people.

The word “slums” conjures images of places that demand this kind of militarized presence, often in the minds of people who have never actually spent time in these communities. Yet, again, favelas are not slums. As written on the website of the Rio-based NGO Catalytic Communities, “According to the UN-HABITAT definition, a slum is a run-down area of a city characterized by substandard housing, squalor and lacking in tenure security. This description doesn’t apply to the vast majority of favelas in Rio: the primarily brick and cement houses are built well and to last; conditions are not squalid, with running water, electricity, garbage collection and Internet access, though of low quality, reaching the majority of homes… The word ‘slum’ originated from the Irish phrase ‘S lom é’ meaning ‘it is a bleak or destitute place,’ and it is this meaning that it carries forth until today. Anyone who has visited a favela can attest that they are for the most part vibrant places that buzz with life and activity,”

When I was in Brazil, speaking with residents in the favelas as well as community organizations, they convinced me that the World Cup and Olympics were being used as a pretext to depopulate and then develop the valuable land where the favelas sit. There is a real estate speculative boom taking place in Rio, and only so much land. Once unheard of, Rio’s wealthy are now looking at the hillside favelas and see the future of residential and commercial development. This is particularly true of areas that could be parking lots, athletic facilities, or security zones for 2016 Olympic construction. The problem is the pesky people who happen live there. Characterizing favelas as slums aids the depopulation effort. Characterizing them as festering dens of criminality aids that effort as well. Raising concerns about the World Cup provides the final justification.

None of this is to romanticize the very real poverty, crime and challenges that do exist in the favelas. Yet it is difficult to grasp how military occupation helps improve these problems or further stabilize these communities. In other words, we have another war on poverty that looks more like a war on the poor.

I spoke with Christopher Gaffney, Rio activist and former professional soccer player, who said, “The continued expansion of Rio´s ‘pacification’ program in strategic areas pertaining to Rio de Janeiro´s tourist, sports and transportation infrastructure has the look and feel of a counterinsurgency. While there are undeniable benefits to expelling armed drug traffickers from low-income communities, the military occupation has not been accompanied by equivalent investments in other necessary infrastructures. A military police can only treat citizens as potential enemy combatants. The World Cup and Olympics are doubling down on this model, which has tremendous human costs that are borne by those least prepared to bear them.”

Those “bearing the costs” are, ideally for developers, then compelled to leave in an act of “self-deportation.” Think of it as USA-style gentrification, except instead of being propelled by Stop and Frisk police tactics, rising rents, and Artisanal brunch spots, it’s just done by the Marines. And for all the talk that this is an “effort to push out heavily armed drug gangs,” the people in the favelas have also regularly been subject to routine and indiscriminate police violence.

Theresa Williamson, the director of Catalytic Communities also pointed out to me the article’s description of the favela as a “treeless, flat area of about 2 square miles” is made by the Associated Press without any kind of reflection whatsoever. “They don’t ask why an area of 2 square miles with 130,000 people has no trees? All of the areas historically denied services by the city also are bare treeless spaces. The urban heat island effect in these communities is intense, with temperatures well above the wealthy tree-filled parts of the city.”

Then there was the site of the raid itself: Maré. All you would know from the piece is that Maré is “a complex of 15 slums.” Maré may be the most politically active of all of Rio’s favelas, with, according to Catalytic Communities, “more than 100 community organizations and NGOs.” Last June, after a deadly BOPE (Brazilian special forces police) raid into Maré,a series of protests and creative civil actions took place. This is not a community that will stand by silently.

In other words, this battle for Rio is far from over. Remember when you see protests at the 2014 World Cup, it is happening because Brazil’s government, in conjunction with FIFA, has chosen to turn a soccer tournament into a real estate land grab. They have done this without regard for the pesky people who happen to be living on the land. There is an absence of justice for those in the favelas. Because of this, it is hard to imagine how, during the World Cup, there will be peace.

Dave Zirin is the author of Welcome to the Terrordome: the Pain Politics and Promise of Sports (Haymarket) and the newly published A People’s History of Sports in the United States (The New Press). and his writing has appeared in the Los Angeles Times, Sports Illustrated.com, New York Newsday and The Progressive. He is the host of XM Radio’s Edge of Sports Radio. Contact him at edgeofsports@gmail.com