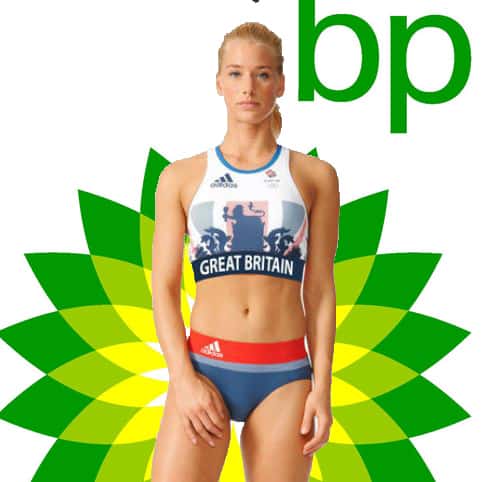 As the Olympic Games officially opened last Friday, oil giant BP placed a two-third of a page advert in the global business newspaper, the Financial Times, featuring its sponsorship of Team GB, the British Olympic team.

“The dreaming. The training. The waiting. The hoping. The best of luck to Team GB. Its time to harness the #Energywithin,” ran the strap-line.

The hashtag #Energywithin is no co-incidence. BP, which is also an international partner of the International Paralympic Committee and the national Olympic committees of the US, Azerbaijan, Turkey and Trinidad & Tobago, is keen to make the comparison between Olympic excellence and the oil giant.

“When the world’s best athletes compete in Rio this summer, many will discover an energy within that they didn’t know they possessed. The energy within is also what drives BP to keep searching for newer, better, safer ways to provide the energy that the world needs,” argues Director of Brands for BP Duncan Blake.

The subtle, clever branding has even been placed into quotes of two of Britain’s best Olympic athletes, Jessica Ennis-Hill, who competes in the heptathlon and Lizzie Armistead, a cyclist, who feature in BP branded videos on the company’s website to coincide with the Games.

“Standing on the start line at the world championships, I knew that becoming a mum had given me a new energy within, to show my son and the world what this mother could do”, says Ennis-Hill.

Lizzie Armistead adds: “My life has taught me one big thing about discovering the energy within, if you want to conquer others, you first have to conquer yourself.”

So now we have top global athletes adopting the language and #hashtag of big oil. We have BP buying into the Olympic movement. We have BP greenwashing its image.

This is nothing new. BP has been sponsoring the British Olympic Association since 2008. The company was also a “Sustainability Partner” to the 2012 London Games, where the Oil Giant boasted it “played a central role” in both the Olympic and Paralympic Games.

At the time, Jess Worth, an anti-oil activist from the UK Tar Sands Network said: “BP has bought itself the prestigious title of London 2012 sustainability partner. But this is dangerous greenwash. BP is one of the least sustainable companies on earth, responsible for the Deepwater Horizon disaster and the extraction of highly-polluting tar sands. Its entire business is geared towards keeping the world addicted to fossil fuels and driving us towards uncontrollable climate change.”

As BP drives us towards an uncontrollable climate future, numerous other sportsmen and women, including Brazilian surfers, footballers, water polo players and athletes from vulnerable countries such as the Marshall Islands, Afghanistan and South Sudan have been speaking up for the campaign: “1.5C: The record we must not break.”

The campaign message is simple: we cannot afford global temperatures to increase beyond 1.5C.

But in BP’s world, we just carry on drilling for oil and gas, going way beyond 1.5C. An advert for the Olympic 1.5C climate campaign asks a simple question: “Is it right to steal the future of millions of people.”

It is a question that should be put to BP and all the teams that are being sponsored by the oil giant.

And they should be made to answer it.

Andy Rowell is a staff blogger for Oil Change International in addition to working as a freelance writer and investigative journalist who specializes in environmental, health and lobbying issues. Follow him on Twitter: @andy_rowell