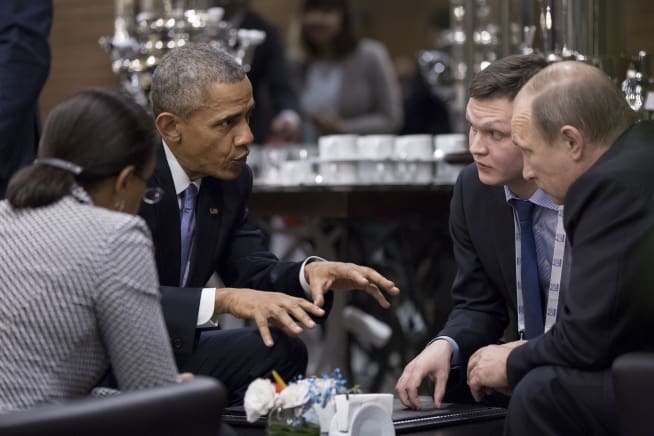 A bombed passenger airliner that killed 224.

Dramatic and deadly attacks against civilians in Paris, Beirut, Baghdad, and elsewhere that killed hundreds more.

Escalating airstrikes by foreign fighter jets, drones, and cruise missiles against targets inside Iraq and Syria that are killing untold numbers of innocent people.

It’s not a world war—at least not yet— but the growing global focus on the Islamic State militant group that currently holds territory in both Iraq and Syria is brewing an increasingly volatile situation that is reverberating from the heart of the Middle East to the major cities of Paris, Beirut, and Moscow, and taking center stage in the political conversations in the U.S., across Europe, and beyond.

As France on Tuesday concluded a second wave of heavy airstrikes against alleged ISIS targets inside Syria and pressed European allies to join them in response to recent attacks in Paris, the Russian military also pounded targets in areas controlled by the group following an official announcement from Moscow that last month’s downing of a passenger airliner in Egypt was, conclusive evidence shows, an intentional bombing.

Though individuals and groups claiming to represent ISIS had claimed responsibility for the act, Russian officials said they were not yet certain of who planted the bomb. On Tuesday, they offered a $50 million reward for information leading to the perpetrators while Putin vowed aggressive action.

“We will search for them everywhere, no matter where they are hiding,” said Putin during a televised meeting of his security cabinet. “We will find them in any place on the planet and will punish them.”

Putin later said that coordination between its military and France was essential in order to intensify assaults against ISIS inside Syria. “It’s necessary to establish direct contact with the French and work with them as allies,” the Russian president said.

The expressed anger and military escalation by both the French and Russian governments comes as diplomatic efforts, which began in Vienna two weeks ago, advanced with informal talks between U.S. President Obama and Putin on the sidelines of the G20 meeting in Turkey this weekend.

On Tuesday, Secretary of State John Kerry said that new progress on a framework for joint action by the U.S., Russia, France, European nations, and key Gulf states—including Iran and Saudi Arabia—could mean that a possible cease-fire among some warring factions inside Syria could take place in a matter of weeks.

As the Associated Press reports:

Saudi Arabia is expected to host a meeting of Syrian opposition figures by mid-December, at which they are to agree on a delegation to send to talks with representatives from President Bashar Assad’s government. Once those negotiations begin, a ceasefire is to take effect, according to the agreement reached in Vienna.

Such a ceasefire would free nations supporting Syria’s various factions to concentrate more on the Islamic State, which is ineligible for the truce and has come under greater military scrutiny since Friday’s attacks in Paris.

Kerry described the development as a “gigantic step” and said, “If we can get that done, that opens up the aperture for a whole bunch of things. We’re weeks away conceivably from the possibility of a big transition for Syria, and I don’t think enough people necessarily notice that. But that’s the reality.”

At the same time, the Pentagon announced Monday that it had stepped up military strikes against ISIS in Iraq, touting the bombing of a convoy of more than 100 oil tanker trucks it claimed belonged to the group as evidence of a new strategy to defang and defund their operations.

French Foreign Minister Jean-Yves Le Drian made the request in Brussels by asking EU members to take a direct role “in France’s operations in Syria or Iraq, or by easing the load or providing support for France in other operations.”

The clause, which has never been used before, says that “if a member state is the victim of armed aggression on its territory, the other member states shall have toward it an obligation of aid and assistance by all the means in their power.” Though all countries swiftly backed the call, it was unclear what kind of specific support each nation would ultimately put on the table.

Additionally, French President François Hollande is now expected to meet with both Putin and Obama next week to discuss the campaign against the Islamic State and urge for a “grand coalition” against the group.

Writing for the foreign policy-focused website The Lobe Log, former CIA analyst Graham Fuller explains that despite great misgivings about the legacy of the western military interventions in the Middle East—ones that have “not only failed, but have vastly exacerbated nearly all regional situations”—there is no longer any denying that ISIS’ recent attacks, against the Russian airliner in Egypt, Beirut last Thursday, and Paris on Friday, have dramatically changed the game.

Pushing further, independent writer and researcher Nafeez Ahmed explains in an analysispublished Tuesday how the simple-minded focus on these latest high-profile attacks and the predictable knee-jerk military response by powerful governments like France, Russia, and the U.S. actually betray what nearly fifteen years of the so-called “War on Terror” have made obvious. Writes Ahmed:

… The truth staring us in the face is that the Paris attacks offer incontrovertible proof that all our efforts at ruthlessly flushing out terror through mass surveillance, drone strikes, air strikes, ground troops, torture, rendition, the Prevent agenda, and so on and so forth, have produced the opposite result.

What we really need is a fundamental re-assessment of everything we have done since 9/11, a full-on, formal international public inquiry into the abject failure of the ‘war on terror.’

The facts, which most pundits and politicians continue to avoid mentioning, speak for themselves. We have spent well over $5 trillion on waging the ‘war on terror’, not just in Iraq, Afghanistan and Pakistan, but across the Middle East and central Asia. Over that period, US State Department data shows that terror attacks have skyrocketed by 6,500 percent, while the number of casualties from terror attacks has increased by 4,500 percent.

Such arguments are why so many observers are placing a modicum of hope in the progress of diplomatic reproachment between key regional and global actors.

And, while expressing alarm and concern over the many civilians likely dying as a result of the U.S., French, and Russian airstrikes inside Syria, it was journalist Abdel Bari Atwan,appearing on Democracy Now! on Tuesday morning, who offered the latest explanation of why a military solution—whether coordinated between nations or not—simply does not exist for solving the crisis in Syria and Iraq.

It was the “American invasion of the Middle East—Iraq, in particular,” concluded Atwan, that created “the best environment for the Islamic State and for al-Qaeda to continue their savagery, their terrorism, their brutalism against the people of that region.”