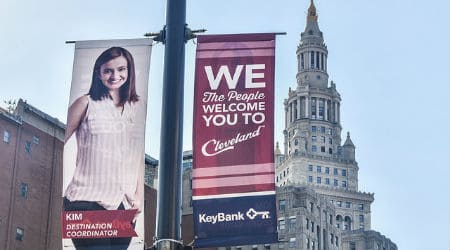 By Alice Speri
The Intercept_

As police officers on horseback and bikes fended off a small rally down the block and helicopters buzzed overhead, the group of mostly black and Latino college students huddled around a picnic table Tuesday and talked about how irrelevant and offensive the Republican event is to many residents of its host city.

“America has never been safe for some people,” said Alice Ragland as she flipped through handwritten slides on the history of American oppression, from the genocide of Native Americans to the lynching of blacks. “For some of us, it has not been a great place to live.”

The students, who branded themselves on social media #CLEoverRNC, riffing off the ubiquitous #RNCinCLE hashtag, hoped to reclaim space in a city that this week has largely excluded Cleveland residents — particularly those of color and little means in what remains one of America’s poorest and most segregated cities.

“I was pissed off when I first found out that the convention was going to happen here, because the reason why Cleveland is in such condition is because of the conservative politics that they’re going to be talking about here,” said Ragland.

“In a city where we have a huge problem with police violence, racial discrimination, economic oppression, where a 12-year-old was killed for having a fake gun, knowing they’re going to be in that same city talking about all those racist policies, and devaluing black lives … for me it’s kind of a slap in the face. It’s insulting.”

As the massive protests many had predicted ahead of the convention failed to materialize in the streets of Cleveland, the groups that did show up were notably light on black and brown Cleveland locals.

“Having this big ceremony here, where you’re going to hear people say things that are anti-black and anti-minority and anti-women, it’s just another reason for people not to care, clock out, stay to the far east or far west and far away from all this,” said Dwight Vincent, a student at the gathering. “And that just makes it easier for them to be forgotten and ignored.”

Protest was the furthest thing from many Clevelanders’ minds right now, added Tatyana Atkinson, pointing out that already inefficient public transportation into the city was largely disrupted because of the convention — and that many with hourly, low-wage jobs found themselves out of work for the week. “How do you expect residents whom this is affecting every day to be here and protest if they can’t even get here?”

She also took issue with the $50 million in federal funding the city of Cleveland received to secure the convention — echoing what several people referred to as a “tale of two cities.”

“[They’re] putting $50 million into the city but not putting $50 million into the city,” she said. “They got all this money for this fun military-grade weapons for a city that already has use-of-force issues, and they just get to keep these weapons to use them against us every day. So the Republicans came, they kept them safe, and now they hurt us every single day afterwards,” she said. “Yay.”

With most protests limited to a few hundred peaceful participants, much of the equipment the city acquired ahead of the convention remained out of sight, though the event zone surrounding the convention was barricaded in a labyrinthine system of gated-off streets, and the police presence, if largely cordial, was ubiquitous. Uniformed law enforcement visibly outnumbered the people taking to the streets.

Officers from a dozen law enforcement agencies as far away as California and Florida patrolled downtown Cleveland mostly on foot and on bikes, greeting people and maintaining a laid-back attitude. But as soon as rallies grew larger or more raucous, officers on horseback showed up to disperse them, and the squads of cops on bikes were reinforced with squads of cops riding bikes while also wearing riot gear.

As of Wednesday, the largest shows of police force were in response to a Tuesday rally against police violence organized by mostly out-of-town members of the leftist Revolution Books group and a group attempting to burn a U.S. flag on Wednesday afternoon. At the first rally, protesters held signs carrying the names of black victims of police brutality in Cleveland and elsewhere, chanting “indict, convict, send these killer cops to jail” and other slogans that have become the trademark of the movement that started in Ferguson, Missouri. But the Cleveland protest was much smaller than similar ones taking place even in recent weeks in cities across the country, and it was quickly dispersed with no incidents.

Civil rights advocates warned against considering that a success, however. They noted that police didn’t need to turn to more suppressive crowd dispersal tactics largely because they had already intimidated most people out of attending in the first place.

“There are police everywhere, they have massive weapons, and this creates a chilling effect on people’s willingness to come downtown and engage in their free speech rights and right of assembly,” Jacqueline Greene, a coordinator with the Ohio chapter of the National Lawyers Guild told The Intercept as a line of officers on horseback blocked off a road by Cleveland’s Public Square, the heart of most rallies. “We’re at a breaking point in terms of racial justice issues, and it’s critical that those conversations happen, but the appropriate response is not militarized police, and it is not the chilling of expression of First Amendment rights.”

Julia Shearson, the executive director of Ohio’s chapter of the Council on American-Islamic Relations, told The Intercept that some 4,000 members of the National Guard were stationed down the road from her office.

“What’s happened is that we have incredible suppression of public participation in the protest movement, so many people stayed away, even regular people who would maybe just want to come down and see what’s going on, because this has been turned into an armed camp,” she said. “That’s not how the political process should be. If the politicians are so afraid of the people, I think they need to question what kinds of policies they’re making vis-a-vis the people.”

Shearson was speaking from a small Tuesday morning rally against police violence, as Arizona Sheriff Joe Arpaio was escorted into the convention center followed by dozens of journalists and a couple of boos and shouts of “shame on you.”

The rhetoric and hatefulness from speakers on the convention’s first night were also a deterrent to many locals, Shearson said. She singled out former New York Mayor Rudy Giuliani for calling the Black Lives Matter movement “racist.”

“You cannot get more tone-deaf to the suffering of the African-American community,” she said. “It doesn’t help law enforcement to have this vehement, bigoted response to what are legitimate grievances. … People are so dejected and so apathetic and have so little hope in the American political system to solve the problem.”

Speaking at the same Tuesday morning rally, professor and civil rights activist Cornel West told reporters that because the political class failed, someone had to keep pushing for justice and an end to racism.

“Some of us have to stand up for justice, love, sensitivity,” he said. “If the party wants to live in a bubble, if they want to live in denial, then they’re going to reap what they sow. But I’m not here to convince the Republicans.”