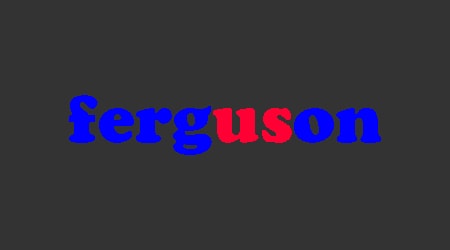 By Hannah Giorgis
The Guardian

Black lives matter? It’s tough to keep saying something like that – to shout it in anything but protest – with this impending reality: At some point in the next few days, it’s likely that Darren Wilson will not be indicted, by the US justice department or the state of Missouri, for the extrajudicial killing of Michael Brown – an 18-year-old unarmed black man – in Ferguson, in broad daylight, three long months ago.

It is at once horrific and predictable that a law enforcement officer may never have to answer for his crimes in criminal court, that his life will remained buttressed by the power of a blue wall as more black people are shot dead in America simply for existing, and by secret online donations from supporters with names like “Jim Crow” who applaud him for “taking out the trash”, like George Zimmerman and so many others before him.

But to understand a non-indictment in Ferguson as simply par for the course in the United States case is not to say that Brown’s life is unworthy of defending, nor that his death and its international aftermath are unworthy of redress. This reality check simply locates another officer in the context of the white supremacist law-enforcement apparatus that defends him in lieu of protecting its (black) citizens, that operates with impunity. And for the rest of us to view black life as worthy of defending, to unequivocally repeat that black lives matter in a world that insists otherwise, is a radical act – if a tiresome one.

The hard truth about no justice for Mike Brown is that we must reassess our standards for justice to create a kind of peace – for his family, for Ferguson, and for those of whose anger and grief emerge anew each time a black life is taken without consequence.

With the Missouri grand jury expected to announce its decision as early as “mid-November”, Ferguson community members are preparing a response and asking that they be given 48 hours’ notice to do so. The Don’t Shoot Coalition has issued a set of 19 demands – and they are, like the desire for Wilson to be indicted for a crime no one denies he committed, very modest. Especially the first demand:

The first priority be the preservation of human life.

It is a simple request, perhaps the simplest we know as humans – the desire to exist freely without imminent, disproportionate threat to our lives. And yet, the weeks since Brown’s death have seen continued violence from the state, including the fatal, officer-involved shootings of two other young black men in nearby St Louis, Vonderrit Myers and Kajieme Powell.

The US justice system has failed to provide solutions to the problems it creates. It cannot reform a policing apparatus first conceived as a runaway slave patrol with cursory racial sensitivity training. And while outgoing US attorney general Eric Holder stressed the need for“wholesale change” in the Ferguson police department, his Department of Justice is limited by bureaucracy and allegiance to its own conventions. President Obama’s nomination of two-time US attorney Loretta Lynch to succeed Holder may offer renewed momentum, but renewed from what? From begging for some semblance of justice? From having to stage the most influential protest on race in a generation only to see absolutely zero decrease in the level of violence faced by the black community?

That we must beg for the government to take up the mantle for victims in cases where black folks’ blood has been unceremoniously spilled is not without precedent: Zimmerman was not arrested for more than six weeks following the 2012 killing of Trayvon Martin. The jury’s failure to convict Zimmerman on murder charges sparked a wave of black youth activism that channels righteous anger and inexplicable pain into community-driven advocacy initiatives not wholly unlike the collective awakening that emerged after the 1992 beating of Rodney King.

Community members on the ground in Ferguson and in the surrounding areas have already been demonstrating the power of transformative, compassionate organizing. They are broadcasting it to the rest of the world, inviting us to bear witness and offer our support as they demand full justice – even if they don’t get it. For those of us on the outside awaiting an inevitably frustrating decision, the primary task remains to listen to local activists, and lend our support in the ways they envision it.

But there is work we can do in our own backyards: In confronting all this exhausting disillusionment and fear, we can boldly redefine our visions of justice such that they no longer privilege punitive, carceral responses to “isolated incidents” of wrongdoing – officer-involved or otherwise.

We cannot indict white supremacy, but we can divest of institutions that enforce it by developing community responses to violence, collectively monitoring police activity, and structuring our safety initiatives to protect the most vulnerable among us rather than relying on systems more likely to harm them.

We can treat the root of our pain and hold one another accountable whenever we take it out, sometimes violently, on one another. We may not have control of a justice system that suppresses the people it’s supposed to protect, but we have each other. And even when the grandest of grand juries dares to deny the sanctity of our lives while the world watches, we still matter. We always will.