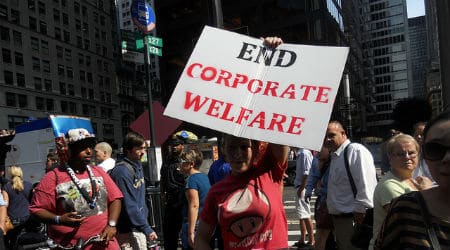 Sen. Bernie Sanders, who had expressed willingness to work with Donald Trump on saving 2,100 jobs at the Carrier manufacturing plant in Indiana, is alarmed at the deal Trump struck in order to save less than half those jobs: tax benefits for Carrier’s parent corporation, United Technologies, a major defense contractor. Sanders foresees orther corporations holding jobs hostage for a ransom of tax breaks, paid for by working calss taxpayers.

You can (and should) read Sen. Sanders’ full article at The Washington Post. Here are a couple of highlights.

Trump has endangered the jobs of workers who were previously safe in the United States. Why? Because he has signaled to every corporation in America that they can threaten to offshore jobs in exchange for business-friendly tax benefits and incentives. Even corporations that weren’t thinking of offshoring jobs will most probably be re-evaluating their stance this morning. And who would pay for the high cost for tax cuts that go to the richest businessmen in America? The working class of America.