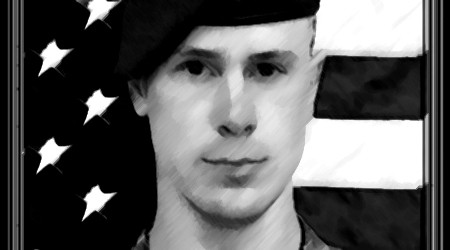 When Bowe Bergdahl was reported missing in Afghanistan on the morning of June 30, 2009, a crack formed in the U.S. narrative about the longest war in our nation’s history. Bergdahl’s release this week, as part of a prisoner-of-war swap with the Taliban, has provoked the partisan pundits to hurl invective at the American POW, his family, and at President Barack Obama. Far removed from the din of these professional Beltway hecklers, though, in Hailey, Idaho, Bob Bergdahl, the young prisoner’s father, has been struggling for his son’s release. The ordeal of the son, and the disciplined, contemplative activism of the father, projects the U.S. war in Afghanistan through a different lens.

We know little yet of what exactly led to Bowe Bergdahl’s disappearance that night in Paktika province. Sean Smith, a filmmaker with The Guardian, met him the month before his disappearance. “Bowe was a softly spoken, intelligent and thoughtful guy,” Smith wrote. Smith produced two remarkable videos, one with footage shot in Afghanistan, another in Idaho, showing Bob Bergdahl’s personal efforts to not only free his son, but to understand the U.S. mission in Afghanistan. Bowe himself is not interviewed in Smith’s films, but two fellow soldiers, in their tightly-knit group of five or six, were:

SOLDIER ONE: “These people just want to be left alone.”

SOLDIER TWO: “They got dicked with from the Russians for 17 years and then now we’re here.”

SOLDIER ONE: “Same thing in Iraq when I was there. These people just want to be left alone. Have their crops, weddings, stuff like that, that’s it, man.”

Days later, Bergdahl disappeared. Smith told me, “They weren’t criticizing the chain of command, but they were questioning the war and the concept of it … a number of American soldiers expressed queries and questions.”

Back in Idaho, Smith trekked into a remote, snow-covered camp with Bowe’s father. Bob Bergdahl had grown a long beard and was studying the Pashto language in order to connect with the people of Afghanistan. In the film, Bergdahl talks about his son: “He was not there for national security. He was not there because he lost a personal friend on 9/11. He was there because the way he was raised forced him to have compassion. I know that was Bowe’s motivation, to help these people. That is how the war is shaped in the minds of a lot of Americans, is that we are there as some kind of Peace Corps with guns, and that is just an impossible mission.”

Bob Bergdahl is next shown watching a video of Martin Luther King Jr. delivering his famous “Why I Am Opposed to the War in Vietnam” sermon in 1967. Bergdahl reflected: “How can we teach two generations at least of children in this country that we have zero tolerance for violence but we can occupy two countries in Asia for almost a decade. It is schizophrenic. … The purpose of war is to destroy things. You can’t use it to govern.”

The chorus of voices calling for Bowe Bergdahl to be court-martialed is receiving much attention. Media Matters, a nonprofit media watchdog group, has documented the Fox News Channel’s unrelenting campaign against Bergdahl, and the demonization of his family. The New York Times challenged the claim, tirelessly repeated by CNN, MSNBC and others, that six to eight soldiers died while searching for Bowe Bergdahl in the weeks and months after he went missing.

Other, perhaps better informed people, who get too little space in the mainstream media, have more nuanced responses to the prisoner-of-war swap. Retired Air Force Col. Morris Davis was the chief military prosecutor at Guantanamo Bay until he resigned in 2007. He told me, “I just don’t know how you end a war without talking to the other side.” In response to the criticism that the five Guantanamo prisoners swapped for Bergdahl were high-level terrorists, Davis said, “[I] wasn’t familiar with any of these names … we had more than 12 years. If we could have proven that they had done something wrong that we could prosecute them for, I’m confident we would have done it, and we didn’t.”

The late Rolling Stone journalist Michael Hastings reported on Bowe Bergdahl, quoting emails from Bowe to his parents that were very critical of the U.S. occupation. Bowe wrote, “I am sorry for everything here.” At the end of Sean Smith’s video shot in Idaho, we hear Bob Bergdahl quietly remark about the U.S. war in Afghanistan: “I think this is the darkening of the American soul. It is where the guilt comes from, because you are being told you are helping, but you know on the inside that you are not.”