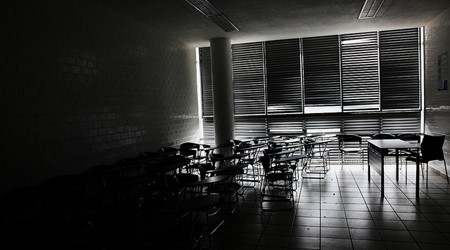 American kids are getting ready to head back to school. But the schools they’re heading back to differ dramatically by family income.

Which helps explain the growing achievement gap between lower and higher-income children.

Thirty years ago, the average gap on SAT-type tests between children of families in the richest 10 percent and bottom 10 percent was about 90 points on an 800-point scale. Today it’s125 points.

The gap in the mathematical abilities of American kids, by income, is one of widest among the 65 countries participating in the Program for International Student Achievement.

On their reading skills, children from high-income families score 110 points higher, on average, than those from poor families. This is about the same disparity that exists between average test scores in the United States as a whole and Tunisia.

It’s a reflection of the nation’s widening gulf between poor and wealthy families. And also about how schools in poor and rich communities are financed, and the nation’s increasing residential segregation by income.

According to the Pew Research Center’s analysis of 2010 census tract and household income data, residential segregation by income has increased during the past three decades across the United States and in 27 of the nation’s 30 largest major metropolitan areas.

This matters, because a large portion of the money to support public schools comes from local property taxes. The federal government provides only about 14 percent of all funding, and the states provide 44 percent, on average. The rest, roughly 42 percent, is raised locally.

Most states do try to give more money to poor districts, but most states cut way back on their spending during the recession and haven’t nearly made up for the cutbacks.

Meanwhile, many of the nation’s local real estate markets remain weak, especially in lower-income communities. So local tax revenues are down.

As we segregate by income into different communities, schools in lower-income areas have fewer resources than ever.

The result is widening disparities in funding per pupil, to the direct disadvantage of poor kids.

What are called a “public schools” in many of America’s wealthy communities aren’t really “public” at all. In effect, they’re private schools, whose tuition is hidden away in the purchase price of upscale homes there, and in the corresponding property taxes.

Even where courts have requiring richer school districts to subsidize poorer ones, large inequalities remain.

Rather than pay extra taxes that would go to poorer districts, many parents in upscale communities have quietly shifted their financial support to tax-deductible “parent’s foundations” designed to enhance their own schools.

About 12 percent of the more than 14,000 school districts across America are funded in part by such foundations. They’re paying for everything from a new school auditorium (Bowie, Maryland) to a high-tech weather station and language-arts program (Newton, MA).

“Parents’ foundations,” observed the Wall Street Journal, “are visible evidence of parents’ efforts to reconnect their money to their kids.” And not, it should have been noted, to kids in another community, who are likely to be poorer.

As a result of all this, the United States is one of only three, out of 34 advanced nations surveyed by the OECD, whose schools serving higher-income children have more funding per pupil and lower student-teacher ratios than do schools serving poor students (the two others are Turkey and Israel).

Other advanced nations do it differently. Their national governments provide 54 percent of funding, on average, and local taxes account for less than half the portion they do in America. And they target a disproportionate share of national funding to poorer communities.

As Andreas Schleicher, who runs the OECD’s international education assessments, told the New York Times, “the vast majority of OECD countries either invest equally into every student or disproportionately more into disadvantaged students. The U.S. is one of the few countries doing the opposite.”

Money isn’t everything, obviously. But how can we pretend it doesn’t count? Money buys the most experienced teachers, less-crowded classrooms, high-quality teaching materials, and after-school programs.

Yet we seem to be doing everything except getting more money to the schools that most need it.