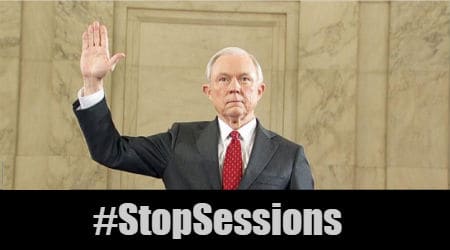 As confirmation hearings got underway Tuesday for Sen. Jeff Sessions (R-Ala.), President-elect Donald Trump’s pick for attorney general, widespread protests continued throughout the country, on social media, and within the chambers of Capitol Hill.

CODEPINK protesters and other activists were escorted from the proceedings after disrupting the hearings, chanting, “No Trump, no KKK, no fascist USA,” and hoisting signs that read, “End Racism, Stop Sessions” and “Support LGBTQ, Stop Sessions,” among other slogans.

On social media, opponents tracked actions and posted their own messages of protest under the hashtag #StopSessions.

Sen. Dianne Feinstein (D-Calif.) read off a list of the Alabama lawmaker’s anti-civil rights, anti-immigrant, and anti-LGBTQ record, stating, “Ultimately, we must ask: Can Senator Sessions be attorney general for all people?”

For many, the answer is unequivocally no.

On Monday, a coalition of interfaith clergy and moral leaders published a letter in The Nationurging U.S. Congress to reject Sessions’s nomination, also highlighting his historic attacks on voting rights, his promotion of xenophobia and bigotry, and his record of voting against equal rights for women. “Not only in the distant past but also in the present day, Senator Sessions’s record reveals his consistent support for ideological extremism, racist and classist policies, and the writing of discrimination into law,” the letter states.

The letter was the latest salvo in a sustained campaign of resistance. Also Monday, hundreds of protesters, led by the renowned faith leader and NAACP North Carolina official Rev. William Barber, assembled in Washington, D.C. to voice their opposition to the “moral crisis” of Trump’s presidency and Sessions’s nomination.

“Donald Trump and Jeff Sessions have backing from groups that like to call themselves white evangelicals,” Barber, one of the principle organizers of the weekly Moral Monday rallies that have attracted thousands of activists in North Carolina, told the crowd. “Well, I know a lot of white evangelicals. … Those who have chosen to get behind the race-driven, class-driven agenda of Trump and his pick—namely, white evangelicals—are engaging in theological malpractice and heresy. … It is a form of heresy to attempt to use faith to endorse hate and discrimination and injustice.”

Barber was joined by the well-known Imam Ali Siddiqui, who told the crowd, “Resist, resist, resist,” and Rabbi Jason Kimelman-Block, director of Bend the Arc Jewish Action, who said, “The role of the attorney general requires a demonstrated commitment to providing equal protection under the law. Jeff Sessions unequivocally fails that test.”

The opposition has also grown to include members of Congress. Last week, Sen. Sherrod Brown (D-Ohio) became the first senator to confirm he would vote against Sessions. On Monday, Slate reported that Sen. Corey Booker (D-N.J.) would testify against him during the hearings—marking the first time that a sitting senator would argue against a colleague’s nomination to a cabinet post.

“I do not take lightly the decision to testify against a Senate colleague. But the immense powers of the attorney general combined with the deeply troubling views of this nominee is a call to conscience,” Booker said in a statement Monday. “The Attorney General is responsible for ensuring the fair administration of justice, and based on his record, I lack confidence that Senator Sessions can honor this duty.”