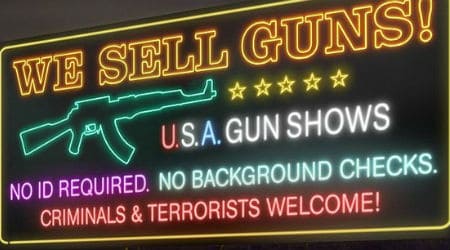 And on Saturday night, there was a terrible shooting in Kalamazoo, Michigan, in which six of my fellow Michiganders were killed and two seriously wounded.

Michigan, and the people leading it, should be humbled by the deaths of so many people. And yet on Tuesday, when members of our legislature return to work in Lansing, many of them will carry guns in the state capitol and, presumably, return to their efforts to loosen our gun laws.

Last year, Michigan eliminated its county gun license boards, after pressure from the NRA. The boards had allowed local officials to decline some gun license applications from people they knew were unworthy – like those with a history of misdemeanor domestic violence charges, violent juvenile records or drug or alcohol abuse problems – even if there was no reason under the state law to deny their applications. Now, applicants don’t have to have an in-person interview, and can receive a gun license through a less thoughtful process.

There is currently a bill pending in the legislature to simplify the concealed carry gun permit process and not require any license at all – the so-called “constitutional carry” bill. “These bills simply place into law the Second Amendment rights of Michigan residents to bear arms without asking the government’s permission to do so,” one co-sponsor, Representative Tom Barrett, said. Yet the research suggests a strong correlation between weak gun laws and higher rates of gun crimes – a correlation Michigan should be loath to test.

Then there is the Senate Bill 442, sponsored by senate leader Michael Green, which would allow people to carry concealed guns into schools, hospitals, bars and several other places that traditionally had been off limits. The bill is opposed by my organization, Physicians for the Prevention of Gun Violence (PPGV), the Michigan Academy of Family Physicians, school administrators, teachers, hospital administrators, Moms Demand Action and Michigan Coalition Against Gun Violence; even the “open carry” gun owners are opposed and even Governor Rick Snyder was unhappy with the bill unless local school boards were allowed to opt out.

Last, there is a Preemptive Punishment Bill, HB4795, which would penalize those localities that act to place any limits on gun owners in excess of state law. The bill was seemingly introduced in response to a decision by the Ann Arbor school board to prohibit a gun owner from exercising what he felt was his right to bring a gun to a school function, where state law currently allows him to carry his weapon. If the bill passes, local boards could face civil liability if they persist in restricting people from carrying guns, and gun owners could collect court costs and penalties.

With so many NRA members in the state legislature, it’s not surprising that they would seek to liberalize gun laws despite the rash of mass shootings in the US – there have already been 42 in 2016, after 374 in 2015. More children lose their lives to guns than cancer; guns and car accidents kill Americans at an identical rate. We cannot and should not continue to pay this high a cost as a society.

Since founding PPGV in 2006 –and especially since Congresswoman Gabrielle Giffords was shot as part of a mass shooting in Tucson, Arizona, in 2011 – my co-founder and I have been working to unite doctors behind the need to address the shootings that have become a public health crisis for the US. We are scientists with a mission, and we are now 370 strong (with a former mayor, professors, deans and over a dozen program directors among us).

We know that we must work to counter the actions of those who support the NRA at any cost: we must demand universal background checks, we want technologies to keep children from firing weapons, and we want to make sure that the government does not prohibit doctors from asking their patients about gun safety in the home, as 11 states have already proposed. We want – with our elected officials, who have too often refused to take action – to apologize to the many victims who have waited in vain for the US to catch up with the rest of the civilized world in gun violence prevention.

And we can hope that even those who value the Second Amendment begin to value the health and safety of all Americans just as much as what’s written in the US constitution.

Dr Walden, a board-certified family physician, co-founded Physicians for the Prevention of Gun Violence in 2011. A graduate of the University of Michigan Medical Schoo, he founded and was the medical director of Packard Community Clinic (now Packard Health) a 501c3 nonprofit agency with a mission to provide high quality health careregardless of financial circumstance. He also served as a volunteer doctor in Chiapas, Mexico, in New Orleans post-Katrina, and at the Hope Clinic in Ypsilanti. He was the chief medical officer at the US penitentiary Terre Haute, Indiana in the late 1960s and has served as a medical expert in prison related health cases.
Share This