This program has already taken place.
You can view a video of the program by
clicking here

Apple Corp’s recent vow to fight an FBI demand to break the security encryption on its own products has set up a profoundly important struggle over government’s power to intrude into our lives. As the Washington Post explained it, “The FBI sees this as a privacy vs. security debate, while the tech community sees it as a security vs. surveillance debate.” Our guest for this month’s forum, Aleecia M. McDonald, an expert in online privacy and public policy, says, “It is a fight for the nature of the nation.” She notes the case has significant international implications, as well.

“The U.S. government has asked us for something we simply do not have, and something we consider too dangerous to create. This moment calls for public discussion, and we want our customers and people around the country to understand what is at stake.”
– Tim Cook, Apple CEO, in a public letter to customers

On Tuesday, February 16, a US District Court in California, responding to an FBI request, ordered Apple to write an entirely new operating system for its iPhone, one that would give Federal authorities full access to encrypted private information on those phones. Apple is strongly and publicly defying the order.

The FBI is hoping to unlock the iPhone of one of the San Bernardino mass murderers, a task they have failed to accomplish thus far, due to the strong encryption on the phone. While the FBI insists it will use the court ordered software only on the shooter’s phone, Apple CEO Tim Cook, writing in an open letter to customers, noted that “there is no way to guarantee such control.”

Apple’s defiance of this FBI order may very well stand as a watershed moment in the fight over government surveillance. The Electronic Frontier Foundation has already announced it will support Apple by filing an amicus brief with the courts. Posting on Twitter, NSA whistleblower Edward Snowden said, “This is the most important tech case in a decade,” and called on Google to publicly support Apple’s principled stand. 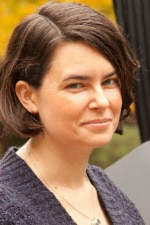 Aleecia M. McDonald is a privacy researcher and non-resident Fellow at Stanford’s Center for Internet & Society. She focuses on the public policy issues of Internet privacy, including user expectations for Do Not Track, behavioral economics and mental models of privacy, and the efficacy of industry self regulation. Aleecia’s decade of experience working in software startups adds a practical focus to her academic work, and she was a Senior Privacy Researcher for Mozilla prior to working at Stanford. Her findings have been featured in media outlets such as the Washington Post, Ars Technica, and NPR. She has presented findings in testimony to the California Assembly, and contributed to testimony before the United States Senate and the Federal Trade Commission. She holds a PhD in Engineering & Public Policy from Carnegie Mellon.