AOC, Lieu to Senate Dems: Say on the Record Whether Gorsuch and Kavanaugh Lied 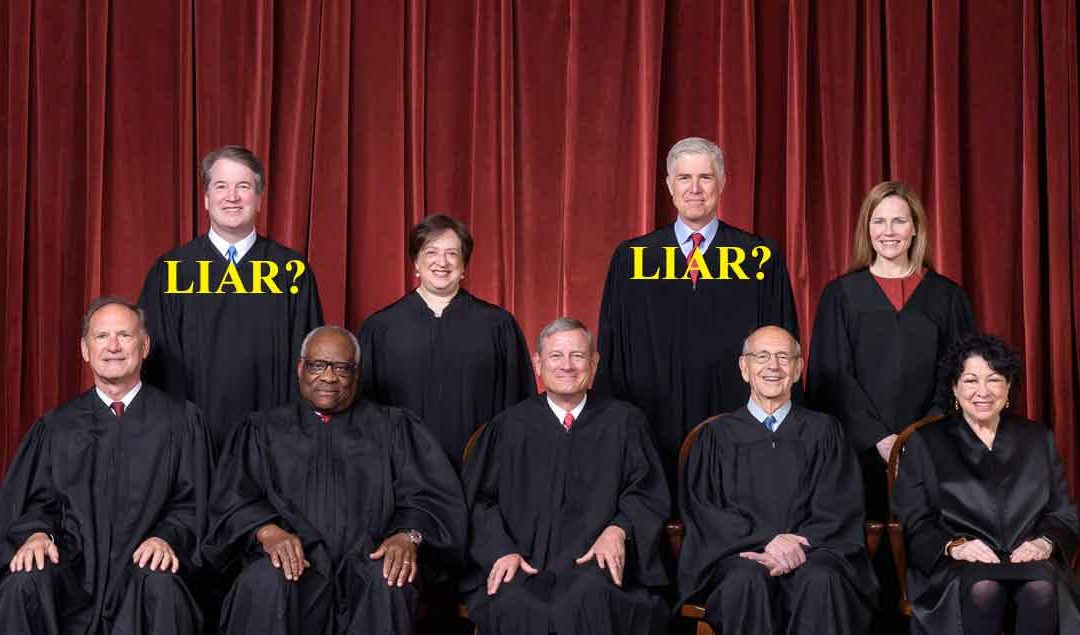 Reps. Ted Lieu and Alexandria Ocasio-Cortez demanded Monday that Senate Democratic leaders say on the record whether they believe U.S. Supreme Court Justices Neil Gorsuch and Brett Kavanaugh lied under oath about their views on Roe v. Wade, a 1973 decision that both judges voted to overturn last month.

In a letter to Senate Majority Leader Chuck Schumer (D-N.Y.), Lieu and Ocasio-Cortez noted that neither Gorsuch nor Kavanaugh contended during their Senate confirmation hearings that Roe was “egregiously wrong from the start,” a position that both justices assented to last month by joining Justice Samuel Alito’s majority opinion in Dobbs v. Jackson Women’s Health Organization—a ruling that ended the constitutional right to abortion.

“They expressed the exact opposite position,” the Democratic lawmakers wrote. “While several justices made misleading statements during their confirmation hearings, two examples are particularly egregious.”

Lieu and Ocasio-Cortez went on to cite Gorsuch’s under-oath comment in 2017 that Roe “is a precedent of the United States Supreme Court” that “has been reaffirmed.”

“A good judge,” he added, “will consider it as precedent of the U.S. Supreme Court worthy as treatment of precedent like any other.”

Kavanaugh, for his part, similarly told senators in 2018 that “the Supreme Court has recognized the right to abortion since the 1973 Roe v. Wade case” and has “reaffirmed it many times.”

“It is not as if it is just a run-of-the-mill case that was decided and never been reconsidered, but Casey specifically reconsidered it, applied the stare decisis factors, and decided to reaffirm it,” Kavanaugh said. “That makes Casey a precedent on precedent.”

Senators who voted to confirm both Gorsuch and Kavanaugh—including Sens. Susan Collins (R-Maine) and Joe Manchin (D-W.Va.)—have cited such statements as evidence that the judges duped them into believing they viewed Roe as established precedent and would therefore be unwilling to cast it aside as they did on June 24.

We cannot allow Supreme Court nominees lying and/or misleading the Senate under oath to go unanswered.

Both GOP & Dem Senators stated SCOTUS justices misled them. This cannot be accepted as precedent.

Doing so erodes rule of law, delegitimizes the court, and imperils democracy. https://t.co/yZW6BKnqFG

In their letter on Monday, Lieu and Ocasio-Cortez argued that “we cannot have a system where justices lie about their views in order to get confirmed,” warning that such a system “makes a mockery of the confirmation power, and of the separation of powers.”

“We respectfully request the Senate issue a finding—through a resolution or another kind of public statement—on whether these justices lied under oath to the Senate Judiciary Committee,” added Lieu and Ocasio-Cortez. The New York Democrat has also urged the House to launch impeachment investigations into Gorsuch, Kavanaugh, and other right-wing justices.

“We must call out their actions for what they were before the moment passes,” Lieu and Ocasio-Cortez wrote Monday, “so that we can prevent such a mendacious denigration of our fundamental rights and the rule of law from ever happening again.”