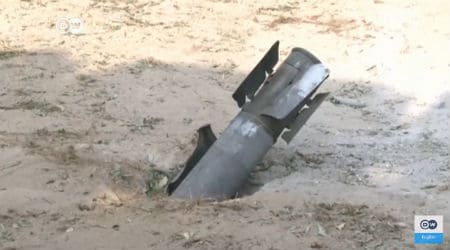 Saudi airstrikes targeting a judiciary building in al-Hudayda, a port on the western coast of Yemen under Houthi control, have killed some 43 people and wounded dozens of others, most of them prisoners.

The strike on the judiciary building, which had a prison attached, could have been predicted to kill civilians. It is therefore a war crime in international law. It isn’t that hard, Riyadh. If you think taking the shot will possibly kill non-combatants, especially a lot of non-combatants, you can’t take it.

Prisoners are especially vulnerable since they are restrained.

Whoever ordered that airstrike should be hauled before the International Criminal Court in the Hague.

In the past, the US military has warned the Saudis against hitting civilian infrastructure (including the port of al-Hudayda and a key bridge at that city) and Riyadh has blown Washington off and hit them anyway. Which makes me want to ask why the US hasn’t completely dissociated itself from this bloodbath.

In mid-September, jets of the Saudis and their allies killed 25 people in their private residences when they struck the residential al-Hunoud district (they were trying to hit a governmental building in the hands of the Houthis).

On October 8, the Saudis struck a civilian funeral from the air. The US said it was reviewing its involvement then, but nothing changed.

The Houthis have also committed war crimes, sending rockets on civilian neighborhoods in Najran, e.g., but in the nature of the case a small guerrilla group can’t wreak the kind of havoc that an America-equipped state of the art air force can.

The Saudi war on the Houthis of north Yemen has been going on for 18 months and for the past 14 months the Saudis and their allies have had exactly zero success. This is because you can’t win a guerrilla war from the air, and there aren’t enough Yemeni troops willing to fight for deposed president Abed Rabbo Mansour Hadi to take even major Sunni cities from the Zaydi Houthis.

The Houthis bear a lot of the blame for the conflict, since they interrupted Yemen’s constitutional process and made a coup, hand in glove with deposed president Ali Abdallah Saleh, in January of 2015. They then tried to take over the whole country, which wasn’t plausible.

The Houthis are a religious extremist movement hailing from the Shiite Zaydi branch of Islam. Part of what started their rebellion was Saudi proselytizing in Yemen for the anti-Shiite Wahhabi branch of Islam.

About a third of the 22 million Yemenis are Zaydis, mainly in the northwest of the country. It was never very likely these 7 million could rule the 15 million Sunnis, or Sunni cities like Aden, and they were fairly swiftly kicked back out of it by the Arab coalition, in summer of 2015. (In fact, most of the 7 million Zaydis aren’t pro-Houthi, so their ambition is even more overweening than this demographic suggests).

The Houthis are braggarts who say they will overthrow the Saudi government. They have imprisoned many human rights workers. The Saudis accuse them of being Iranian puppets but that frankly is silly. They are an indigenous Yemeni movement and they got most of their weapons by raiding Yemeni army depots for American arms. Iran has probably given them a little help, but configuring what is going on as Saudi v. Iran in Yemen is ridiculous.

Apparently the population in Sanaa, the capital, has swung behind the Houthis on nationalist grounds, and they’ve held big demonstrations against Saudi Arabia (Saudi bombed the demonstration).

The Saudi-led war on Yemen has produced enormous hunger and displacement, which is likely only to get worse.

The reason the Saudis keep committing these war crimes is that their tactics are unsuited to the struggle the want to wage. And if they go on like this, they will come to regret it.