‘And Then the Dogs Came’: Dakota Access Gets Violent, Destroys Graves, Sacred Sites 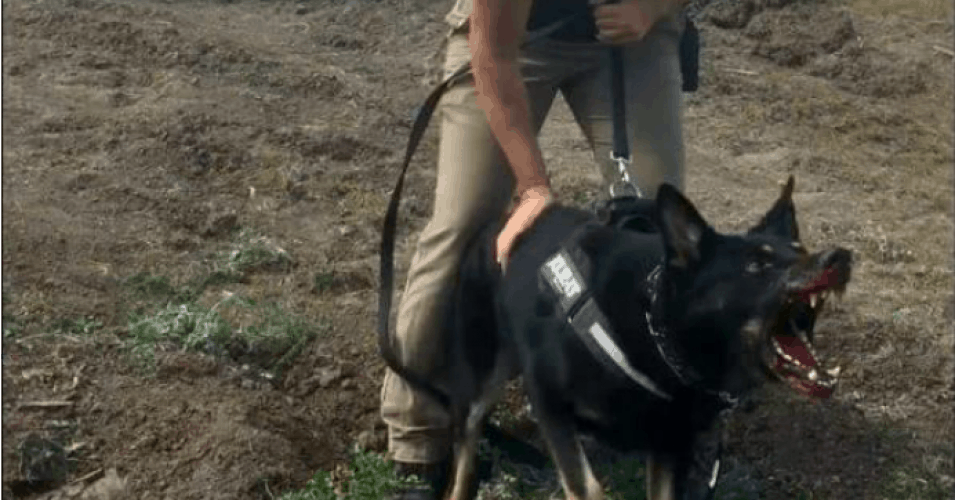 On the afternoon of September 3, a procession of prayerful water defenders, consisting of men, women, and children, walked on foot up to the original protest site where the first demonstrations took place in early August.

Unbeknownst to them, Dakota Access construction workers were fast at work, approximately a mile up the road, bulldozing the earth, destroying graves and sacred sites, while creating a path for pipe to be laid.

“We were walking up to the flags on the highway to sing and pray, then we found out they were starting to build again,” Ursula Young Bear, Oglala Lakota, from Porcupine, South Dakota, told ICTMN.

Marcus Frejo, Pawnee and Seminole, from Oklahoma City, Oklahoma, was also among the first water defenders to arrive on the scene of construction.

“We made it to the top of the hill and saw several bulldozers and trucks, and we walked up to the fence,” Frejo told ICTMN. “There’s sacred sites up there, so one woman stepped through the fence, just feet in, telling them with her son at her side that this is sacred land. She yelled at them to stop.”

“Bulldozers were less than 10-feet from her, and I was thinking, ‘Why can’t this bulldozer that is so close to her stop?’ So I ran in front of the bulldozer to stop, and security came up from behind and just grabbed me and flipped me over,” Frejo said. “All of sudden I’m on the ground, and then more people started coming through the fence and got him off me.”

Construction workers jumped into their trucks, and Frejo says they started to use the vehicles like weapons, going through the crowd erratically and coming very close to hitting some.

“Within minutes, a lot more trucks showed up,” Yellow Bird said. “And then the dogs came.”

Approximately eight dog handlers, hired by Dakota Access, led the barking and snarling dogs right up to the front line.

“The women joined arms, and we started saying ‘Water is life!’ A dog came up and bit my leg, and right after that a man came up to us and maced the whole front line,” Young Bear said.

Young Bear and at least five others suffered injuries from dog bites, and approximately 30 others suffered temporary blindness after receiving a chemical spray to the face and eyes. A horse owned by a Native American water defender also suffered bite wounds from the dogs.

“They let one dog off his leash and ran loose into the crowd,” Frejo said. “That’s when people started protecting themselves against the dog. The guy that let his dog go came into the crowd to retrieve him and started swinging on everybody. He hit some young boys, and they defended themselves.”

Demonstrators said that one female dog handler, in particular, was lunging toward the crowd aggressively with her dog, going beyond the front line.

“It felt like a set up,” Young Bear said.

“Then they came by with bigger cans of tear gas and shot it from their trucks,” Frejo said. He was tear gassed, he says, and couldn’t see.

The moment grew so intense that the dogs soon started to turn on their handlers. Dakota Access guards and dog handlers then left the scene, and more protestors flooded in.  Construction indefinitely halted for the day.

“The cops watched the whole thing from up on the hills,” Frejo said. “It felt like they were trying to provoke us into being violent when we’re peaceful.”

“Portions and possibly complete sites have been taken out entirely,” Mentz said.

As an amendment to the injunction filed in U.S. district court in Washington, D.C., a map of burials and sacred sites was provided by the tribe, many of those sites, falling in the path of construction that Dakota Access bulldozed over on September 3.

Approximately a foot of ground was leveled by Dakota Access, stretching roughly for one and a half miles.

“We’re days away from getting a resolution on the legal issues, and they came in on a holiday weekend, and destroyed the site,” Jan Hasselman, attorney for the Standing Rock Sioux Tribe, said. “What they have done is absolutely outrageous.”

Sarah Sunshine Manning (Shoshone-Paiute, Chippewa-Cree) is a mother, educator, activist, and an advocate for youth. Follow her on Twitter: @SarahSunshineM.