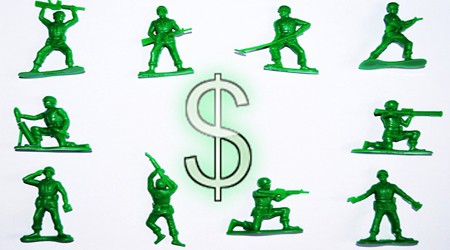 Many Republicans and numerous Democrats, especially on the House and Senate Armed Services Committees, have been characterizing the US defense budget as inadequate.  They propose to release the Pentagon from the statutory spending caps set by the Budget Control Act of 2011 and its “sequestration,” which would keep some, but not all, Pentagon spending in the neighborhood of $500 billion, annually, for several years.  The Joint Chiefs of Staff, the Secretary of Defense and any other Pentagon official near a microphone have been cheering them on.

Absent from all their talking points are three salient facts:

2. the US outspends any other nation, especially presumed threat nations, by a huge amount, and

3.  under the dreaded sequestration, the Pentagon portion of national security spending would remain at historically high levels.

Each year, the International Institute for Strategic Studies (IISS) in London and the Stockholm International Peace Research Institute(SIPRI) release independent and widely respected estimates of international defense spending.  While their methodologies and, therefore, their estimates differ, their data show the same fundamental picture: the US vastly outspends what many in the US today characterize as the threat nations: China, Russia, Iran, Syria and North Korea.  We outspend them not just individually but collectively, by a factor of at least two.

The data for 2013, the latest available, are shown in the figure below. 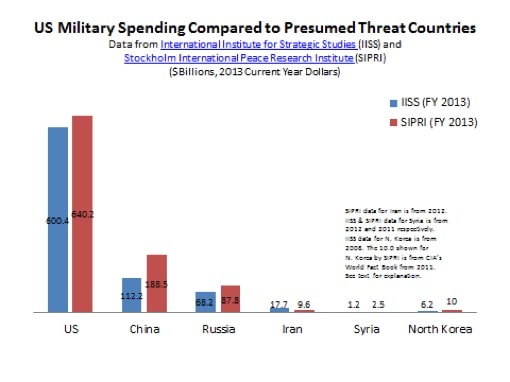 (Note that, as stated in the comment in the graph, the data for Iran, Syria and North Korea are from previous years or-in one case-the CIA’s World Fact Book.  This is because of measurement uncertainties for more recent years.  However, in no case would more up to date data alter the overall picture.)

The IISS released its data in a publication titled The Military Balanceearlier this year; the SIPRI just released its data base this week. While the two differ (SIPRI’s estimates include spending outside official defense budgets) and some may disagree with one or the other methodology, the basic picture is the same: US defense spending is more than twice the size of all presumed threat nations combined.  According to the IISS, the US spending is 2.9 times the presumed threats; according to the SIPRI, the US is 2.1 times them all.  Notably, the budget year displayed, 2013, is the first year that the sequestration process went into effect in the US.

In order to support its world-wide empire at the turn of the 19th century, Great Britain adopted the “two power standard” which called for the Royal Navy to be equal to the combined strength of the next two largest navies in the world.  The US has more than doubled that standard as regards budgets, and yet our politicians and senior defense officials complain such outspending is inadequate.

There are two caveats to the argument that these data show the defense budget to be disproportionately large, not small: one puts current spending in a historic context that shows today’s over-spending to be even more inappropriate; the other calls into question whether it is the size of current spending or the quality of America’s national security leadership that is inadequate.

First, it is fundamentally misleading to characterize China, and even Russia, as major threat nations.  Today is very much unlike the 1948-1990 Cold War when the Soviet Union and the Warsaw Pact constituted an ongoing existential nuclear and conventional threat to the US and a dogmatically communist People’s Republic of China actively fought US armed forces or supported others doing so in two wars involving hundreds of thousands of US ground forces.  Instead, China is a major trading partner and creditor nation with the US, and Russia, even taking into account its occupation of Crimea and potential further invasion of Ukraine (no matter what the cause), constitutes  a regional power, even if major, very unlike the international superpower the Soviet Union comprised and that exercised itself with active hostility throughout Europe, the Caribbean, Africa and Asia.

When we faced these truly existential threats, the Pentagon’s budget was significantly smaller than today.  See the graph below annually displaying the Pentagon’s post-World War Two budgets in dollars adjusted for inflation using the Office of Management and Budget’s economy-wide deflator.  Note especially how today’s so-called “inadequate” spending compares to average annual spending during the Cold War (the dashed, horizontal line, which occurs at the $355 billion level). 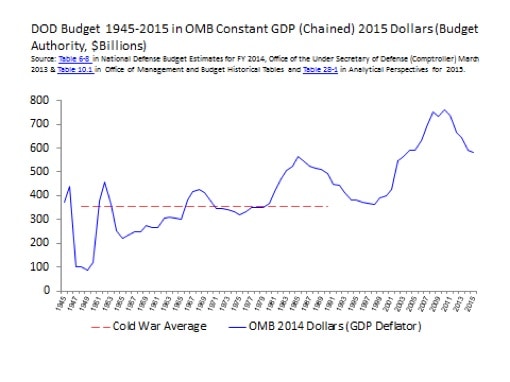 That we today declare ourselves inadequately funded at a far higher level of spending than we budgeted against a much larger, much more hostile threat is remarkable.  More money in the face of lesser threats is not quite the penury so many claim.

Second, we should listen closely when today’s political and military leaders asset they cannot manage at the spending levels they face under the Budget Control Act.  They are quite correct to say they are unable to do so.  Recent history proves that.

* Our military hardware is outrageously expensive, but much of it is a step backwards in performance.

* Since the mid-1990s Congress has increased money for DOD pay and benefits but huge portions of it has been for indiscriminant, across-the-board military pay raises, double pensions for many armed service retirees, bigger benefits for the survivors of World War Two veterans and much else that is intended to buy off political constituencies rather than address real security problems, let alone the wars in Iraq and Afghanistan.

* Under the full-on spigot of the post-9/11 era, the Pentagon’s civilian and military leadership has bloated itself to historically unprecedented levels of overhead, including military staff, civilian government employees and contracted-out personnel.

* In their ultimate malfeasance, none of our national security leaders have bothered to fundamentally understand the dimension of the overspending problem as the Pentagon remains unaudited and un-auditable twenty-four years after the passage of the Chief Financial Officers Act of 1990-intended to require the Pentagon to understand and report what it does with its money.

Winslow T. Wheeler is the Director of the Straus Military Reform Project at the Project on Government Oversight.  He spent 31 years working for the Government Accountability Office and both Republican and Democratic Senators on national security issues.