Amy Goodman: The Cure for the Next Pandemic: Medicare for All 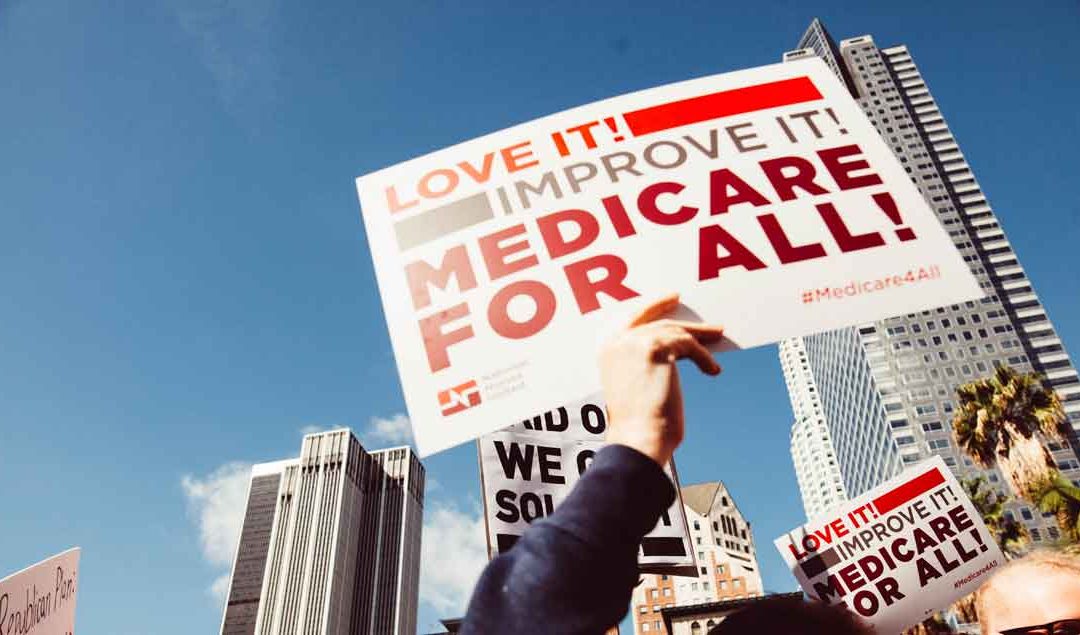 Universal healthcare would lead to a healthier population, more capable of withstanding the impacts of the next pandemic.

More than 330,000 people in the United States died during the pandemic because they were uninsured or underinsured. That grim statistic was reported this week by researchers at the Yale School of Public Health. In addition to that staggering, preventable death toll, in 2020 alone, our “fragmented and inefficient healthcare system,” cost the U.S. $459 billion more than if we had genuine, universal healthcare. The Yale team prescription to prepare for the next pandemic: Medicare for All.

“Our current healthcare system is dysfunctional. It is extraordinarily wasteful and expensive, and it is cruel,” Vermont Independent Senator Bernie Sanders said as he opened a Senate Budget Committee hearing on Medicare for All last month.

“The American people understand as I do, that healthcare is a human right and not a privilege, and that we must end the international embarrassment of our great country being the only major nation on earth that does not guarantee health care as a human right to all of its people,” Sanders continued. “Over 70 million Americans today are either uninsured or underinsured… there are millions of people in our country who would like to go to a doctor, who have to go to the doctor, but cannot afford to do so. This is unacceptable, this is un-American, and this cannot be allowed to happen in the wealthiest country on earth.”

Sanders has introduced S.4204, the Medicare for All Act of 2022, with fourteen Democratic Senators as co-sponsors. Similar legislation is also before the House of Representatives. Medicare for All would lower the eligibility age for the federal Medicare health insurance program from 65 to the time of birth.

With Medicare for All, the government simply pays the bills as the “single payer,” saving enormous amounts of money by removing the health insurance corporations from the equation.

The hospitals, medical offices and laboratories all remain unchanged, primarily as private or non-profit institutions, exactly as they are today. This is how our current Medicare system works for those over 65 years old. Medicare for All wouldn’t change that; it merely expands the population covered to everyone.

Medicare for All would dismantle the bloated, private insurance bureaucracy, saving hundreds of billions of dollars annually. At the Budget hearing, Committee Chair Sanders summarized, “The six largest health insurance companies in America last year made over $60 billion in profit, led by United Health Group which made $24 billion in the midst of the pandemic in 2021. But it’s not just the profits of the insurance companies…The CEOs of 178 major healthcare companies collectively made $3.2 billion in total compensation in 2020, up 31% from 2019. According to Axios, in 2020, the CEO of Cigna, David Cordani, took home $79 million in compensation while people died.”

An analysis produced by the Political Economy Research Institute, PERI, at UMass Amherst, includes a “just transition” for the close to 900,000 people employed by the health insurance industry. Savings provided by a single-payer system could pay for a combination of early retirement and retraining, lessening the impact on those workers.

Single-payer, or Medicare for All, makes sense in normal times, but we are not in normal times. The global COVID-19 pandemic has ripped the scabs off of so many sectors of our society, exposing and exacerbating inequities and a lethal lack of preparation.

The Yale study puts real numbers to it, noting the disproportionate impact on poor and low-income communities and on people of color.

Universal healthcare would lead to a healthier population, more capable of withstanding the impacts of the next pandemic. Regular, preventive doctor visits, the comfort and security of knowing that a needed procedure or hospital visit won’t lead to bankruptcy or add to personal debt, all contribute to a broader resilience. Citing a Gallup poll, the Yale researchers write, “due to apprehension about their ability to pay, 14% of US adults reported that even if they experienced the two most common symptoms of COVID-19, fever and dry cough, they would still avoid seeking care.”

Another lesson of the pandemic is that when any of us is exposed, all of us are. Universal, effective and affordable healthcare makes us all stronger and safer. The simplest way to achieve that is Medicare for All.

Amy Goodman is the host and executive producer of Democracy Now!, a national, daily, independent, award-winning news program airing on over 1,400 public television and radio stations worldwide. Denis Moynihan has worked with Democracy Now! since 2000. He is a bestselling author and a syndicated columnist with King Features. He lives in Colorado, where he founded community radio station KFFR 88.3 FM in the town of Winter Park.