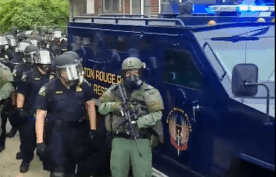 Strangely, amid the spike in racial tensions after the killing of two black men by police in Louisiana and Minnesota, and of five white police officers by a black sharpshooter in Dallas, one American reality has gone unmentioned.  The U.S. has been fighting wars—declared, half-declared, and undeclared—for almost 15 years and, distant as they are, they’ve been coming home in all sorts of barely noted ways.  In the years in which the U.S. has up-armored globally, the country has also seen an arms race developing on the domestic front.  As vets have returned from their Iraq and Afghan tours of duty, striking numbers of them have gone into police work at a time when American weaponry, vehicles, and military equipment—including, for instance, MRAPs (mine-resistant ambush protected vehicles)—have poured off America’s distant battlefields and, via the Pentagon, into police departments nationwide.  And while the police were militarizing, gun companies have been marketing battlefield-style assault rifles to Americans by the millions, at the very moment when it has become ever more possible for citizens to carry weapons of every sort in a concealed or open fashion in public.

The result in Dallas: Micah Johnson, a disturbed Army Reserves veteran, who spent a tour of duty in Afghanistan and practiced military tactics in his backyard, armed with anSKS semi-automatic assault rifle, wearing full body armor, and angry over police killings of black civilians, took out those five white officers.  One of them was a Navy vet who had served three tours of duty in Iraq and another a former Marine who had trained local police for DynCorp, a private contractor, in Iraq and Afghanistan.  Meanwhile, civilian protesters, also armed with assault rifles (quite legal in the streets of Dallas), scattered as the first shots rang out and were, in some cases, taken in by the police as suspects.  And at least two unarmed protesters were wounded by Johnson.  (Think of that, in his terms, as “collateral damage.”)  In the end, he would be killed by a Remotec Andros F5 robot, built by weapons-maker Northrop Grumman, carrying a pound of C4 plastic explosive, and typical of robots that police departments now possess.

In other words, this incident was capped by the first use of deadly force by a drone in the United States.  Consider that a war-comes-home upping of the ante.  Already, reports the Defense One website, makers of military-grade robots—a burgeoning field for the Pentagon—are imagining other ways to employ such armed bots not only on our distant battlefields but at home in a future in which they will be “useful, cheap, and ubiquitous,” and capable of Tasing as well as killing.

Of course, among the many things that have also come home from the country’s wars, Predator and Reaper drones are now flying over “the homeland” on missions for the Pentagon, not to mention the FBI, the Border Patrol, and other domestic agencies.  So the future stage is set.  Once you’ve used any kind of drone in the U.S. to kill by remote control, it’s only logical—given some future extreme situation—to extend that use to the skies and so consider firing a missile at some U.S. target, as the CIA and the Air Force have been doing regularly for years in places like Afghanistan, Pakistan, Yemen, and Somalia. And of course, in our domestic arms race, with small drones commercially available to anyone and the first of them armed (no matter the rudimentary nature of that armament), it’s not hard to imagine a future Micah Johnson, white or black, using one of them sooner or later.  After all, Johnson was already talking about planting “IEDs” (the term for insurgent roadside bombs in our war zones) and a flying IED is a relatively modest step from there.

So, welcome to the “home front,” folks.  And speaking of drones, it’s worth giving a little thought to what might, in fact, still come home, to the sort of example that two administrations have set by turning the president into an assassin-in-chief and regularly creating law for themselves when it comes to the targeting of distant peoples.  In that light, in “The Trojan Drone” Rebecca Gordon considers America’s Trojan Horse technology of death and just what it may someday smuggle into “the homeland.”

Tom Engelhardt, co-founder of the American Empire Project, runs the Nation Institute’s TomDispatch.com. His latest book is, Shadow Government: Surveillance, Secret Wars, and a Global Security State in a Single-Superpower World (with an introduction by Glenn Greenwald). Previous books include Terminator Planet: The First History of Drone Warfare, 2001-2050 (co-authored with Nick Turse), The United States of Fear, The American Way of War: How Bush’s Wars Became Obama’s, The End of Victory Culture: a History of the Cold War and Beyond, as well as of a novel,The Last Days of Publishing.  To stay on top of important articles like these, sign up to receive the latest updates from TomDispatch.com here.