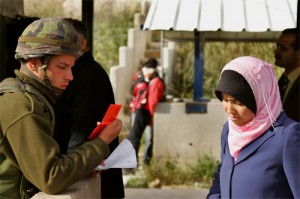 When Stephen Colbert looks at people he doesn’t see skin color. He treats everyone equally because everyone is equally white to him. In the same way, Joseph Kahn, foreign editor of the New York Times, sees no difference between Israelis and Palestinians. When it comes to covering the U.S. – supervised talks between the two neighbors, the Times treats both sides with scrupulously fair equality, Kahn insists.

Of course Colbert’s “color blindness” is a joke, meant to remind us that it’s absurd to treat the historically powerful and powerless as if they were equal. But when the Times’ editor insists on his even-handedness he is apparently dead serious.

When it comes to the Israeli-Palestinian negotiations, at least, the Times is still the flagship of the U.S. mass media, charting the course that most others follow. Even if the Israelis were all white and the Palestinians all black, our mass media would remain strictly color blind. How else could they achieve their constant goal of neutrality, the key to objective reporting?

I trust you get the Colbertian joke. Israel has been dominating the Palestinians ever since it conquered their territories in 1967. It would be crude to say that it’s just like the way white Americans have dominated black Americans over the centuries. There are vast differences. But there is also a very rough analogy here.

At least it’s an exaggeration that points to a crucial truth: In this case, as in so many others, neutrality cannot be the key to objectivity because it ignores an immense inequity of power. When the powerful meet the powerless, journalists must always keep that inequity front and center if they want their reporting to be anything close to objective.

Yet the U.S. mass media do just the opposite. Their reporting on the Israel-Palestine interaction is an endless litany of “he said, she said; he said, she said,” constantly reinforcing the mistaken impression that the two sides are equals in something like a fair fight.

Consider the latest impasse in the talks. The Israelis had promised to release a number of Palestinians they had imprisoned for the “crime” of fighting for their own nation’s independence. No doubt some had used, or planned to use, violent means — imitating the American revolutionaries of 1776 whom our national mythology holds up as heroes. Others, like many Americans during the Revolutionary War, had done no violence but were imprisoned in arbitrary roundups.

Israel reneged on its promise to release the prisoners and rubbed salt in the wound by announcing 700 new apartments for Jewish settlers in East Jerusalem. The Palestinian Authority responded by signing 15 international conventions and treaties, including the Geneva Conventions of 1949, the Hague Convention respecting the Laws and Customs of War, and treaties dealing with women’s and children’s rights.

Yet the official U.S. government response treated both the Israeli and Palestinian actions as equally “unhelpful” acts. The U.S. media was similarly even-handed at best — depicting both steps as equally damaging to the peace process — or, like the Times, put more blame on the Palestinian move.

So Palestinian commitment to international laws of peace and justice was framed as something evil, just as bad as or worse than Israel expanding its illegal housing and imprisoning rebels who were fighting (or wrongly accused of fighting) for their nation’s right to be free.

That’s what happens when you are politically color-blind.

In a sense, American political leaders, media, and most of the public really are blind to the difference between Israeli and Palestinian actions. They are so sympathetic to Israel, and so antipathetic to Palestine, that they don’t see Israel’s dominance over Palestinian life as a form of brute oppression. So they don’t see Palestinian reactions as an understandable — and, in recent years, quite restrained and nonviolent — response to oppression. Treating the two sides as if they were equal combatants in an endless fight reinforces this blindness.

Now the U.S. government is trying, with greater persistence than ever, to resolve the quarrel. So the appearance of neutrality is more important than ever.

If the media constantly reminded us of the immense power inequity between the two sides, the practical implication of U.S. policy would be clear: By constantly demanding Palestinian concessions in roughly equal measure to Israeli concessions, the U.S. government is continuing its historical pro-Israel bias, a bias going back to the very inception of the nation of Israel.

When Harry Truman extended de facto recognition to Israel on the very day it declared its independence (though he waited several months for de jure recognition), he overrode the objection of his own State Department that he would alienate Arab states.

The anti-Arab bias grew stronger in the Eisenhower White House, where it was an article of faith that most Arab governments were tilting toward the communists. When Eisenhower demanded that the Israelis pull back from the Suez Canal in 1956, he wasn’t moved by any concern about justice for the Arabs; he was incensed that Israel — and its allies in the conquest of Suez, Britain and France — would act without his approval and risk pushing the Arabs further into the communists’ arms.

America’s pro-Israel tilt became more blatant during the 1967 and 1973 wars and has remained a hallmark of U.S. policy and politics ever since. The only change is that Republicans are now more likely than Democrats to support the Israeli government, no matter how hawkish it may be.

Barack Obama is following the tradition of Jimmy Carter and Bill Clinton, all Democratic presidents who have posed as neutral mediators between Israel and its Arab rivals (though George W. Bush tried to make that a bipartisan tradition). The key to this pose is a Colbertian pretense of blindness to difference.

By demanding roughly equal concessions from both sides, the U.S. is insisting on an outcome that will maintain the imbalance in power, even if it becomes an imbalance between two independent states.

Yet there’s more than just a pro-Israel bias driving America’s image of equality between the negotiating rivals. It’s also a matter of America’s self-image about its role in the world.

It has always been an article of faith in American public mythology that our foreign policy aims at justice and peace, while other nations are moved by lust for wealth and power. That’s just one of the many ways America is exceptional, the mythology says.

The idea goes back at least as far as Thomas Paine, who wrote inCommon Sense that “in England a King hath little more to do than to make war” which “is to empoverish the nation.” So colonial subjects of the British king would always be embroiled in and impoverished by war. But if they became an independent republic, ruled by the will of the people, they could shape an independent foreign policy that would keep them in peace and prosperity. They would remain above every foreign fray, keeping their hands free of bloodshed and thus pure.

In the early years of the 20th century the myth was extended to cast America as the prime force for world peace and moral purity. Theodore Roosevelt won the Nobel Peace prize in 1906 for his “happy role in bringing to an end the bloody war recently waged between two of the world’s great powers, Japan and Russia,” the Nobel Committee declared, adding that “the United States of America was among the first to infuse the ideal of peace into practical politics.”

But there was plenty of self-interest involved. “We have become a great nation … and we must behave as beseems a people with such responsibilities,” TR boasted. Mediating the Russo-Japanese war was a way to act out American greatness and muscle on the world stage, well-dressed as moral virtue.

It was also a way to stop the expansion of the obviously stronger Japanese military. Roosevelt “decided that [the war] must be stopped before Japan could gain too great an edge and he offered his good offices” as a mediator, George Herring wrote in his authoritative history of U.S. foreign policy,From Colony to Superpower.

Woodrow Wilson made this image of American neutrality and superiority a bipartisan affair in his response to World War I. By guiding the warring Europeans toward a just and lasting peace, he proclaimed before the U.S. entered the war, he would make sure America played “the great part in the world which was providentially cut out for her. … We have got to serve the world.”

But he also intended to lead and shape the world. Though he posed at the Versailles peace conference as a morally superior neutral, he insisted that a just peace “must be constructed along American lines,” especially to ward off the threat of Soviet Bolshevism, which he “abhorred,” to use Herring’s words.

So the Obama administration, with immense help from the U.S. mass media, is continuing a distinguished bipartisan tradition. By treating Israel and the Palestinians as equals, it can portray America standing virtuously above the bloody Old World fray, while at the same time insuring that the outcome suits U.S. interests and the political interests of the administration.

So far that approach doesn’t seem to be moving the Middle East closer to peace.

The only realistic path to peace is to speak honestly — to name Israel as the stronger party, the occupier, and thus the side obliged (legally, morally, and practically) to make more concessions.

Ira Chernus is Professor of Religious Studies at the University of Colorado at Boulder and author of Mythic America: Essays andAmerican Nonviolence: The History of an Idea. He blogs atMythicAmerica.us.