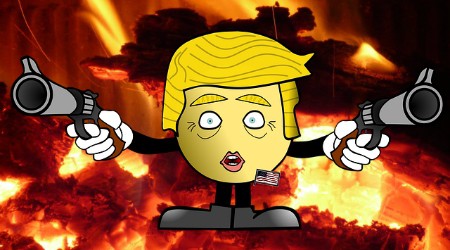 The “warmongering” has been going at full tilt: escalation in Yemen; the bombing of Mosul, Iraq that killed more than 200 civilians; Tomahawk missiles; and the detonation of the ‘mother of all bombs.’

Trump badly wants to prove he is the real deal as president. Brushing aside wider considerations about relations with Russia or the safety of Seoul residents, his principal focus seems to be on building up his personal profile as a tough commander-in-chief who is not to be trifled with.

The unprecedented use of a GBU-43/B Massive Ordnance Air Blast Bomb (MOAB), known as the ‘mother of all bombs,’ on Thursday was just the latest in a series of attacks by the U.S. in recent days, prompting demands for a Congressional debate on the use of military force.

Tom Toles, Washington Post: If nothing else gets done in Trump’s first 100 days, he may at least get a nuclear war in

Everyone’s worst fear about a President Trump, of course, was that somehow he would start a nuclear war. It was partly because of his propensity to find an enemy, target that enemy and always up the ante. And the fear was that after he became president, he would run into political trouble with his offensively retrograde domestic agenda, and a freer hand in foreign affairs would eventually look like his escape hatch to glory.