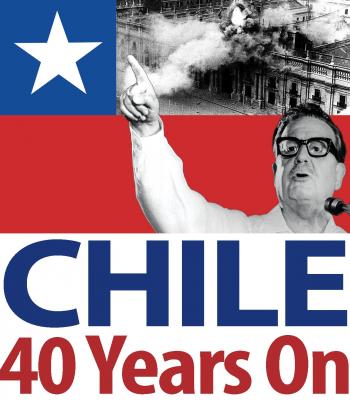 Last night, Barack Obama spoke in defence of his threats to launch U.S. air strikes against Syria. In justifying his push for an attack illegal under international law, the constitutional lawyer and Nobel Peace Prize winner appealed explicitly to American exceptionalism. Obama also prefaced his case for bombing Syria with a stunningly ahistorical assertion of American benevolence:

“My fellow Americans, for nearly seven decades the United States has been the anchor of global security. This has meant doing more than forging international agreements. It has meant enforcing them. The burdens of leadership are often heavy, but the world’s a better place because we have borne them.”

Imagine how this nonsense sounds to Chileans, who are today marking the 40th anniversary of the U.S.-backed coup in Chile against the democratically elected government led by Salvador Allende. More than 3,000 were killed in Chile; tens of thousands were jailed, tortured and exiled.

Chile bore the heavy burden of all those who have shown leadership in fighting for a better world. For over seven decades — was Obama’s metaphorical anchor of global security the atomic bombs dropped on Hiroshima and Nagasaki in 1945? — any people combining too much democracy and some measure of national development or socialism that threatens U.S. interests has been met with blood and suffering imposed by that enforcer of global capitalism, the U.S. Empire.

I’ve learned a lot about Chile’s tragedy through my wife and her family. She was born in a refugee camp in Buenos Aires, and came to Canada as a baby after activists in this country agitated and successfully pressured the Liberal government of the day to admit Chileans fleeing the coup (for more on this history, read David Heap’s piece.) Both of her parents were social activists and part of the resistance. So I have some knowledge of the almost unimaginable human toll of the coup.

However, on this anniversary, I don’t want to just repeat a denunciation of the U.S. and the neoliberal economists and their generals who plunged Chile into darkness. I’d rather think about the light that has emerged over the past decades from Latin America, against all odds.

Henry Kissinger et al carried out the coup in Chile because they couldn’t countenance the union of socialism and democracy. An elected Marxist president just could not be tolerated. Allende was a strict constitutionalist and democrat. The coup was a bloody reminder that the ruling classes will never fight fair. They killed thousands in a vengeful attempt to forever separate socialism and democracy. But you cannot kill an idea. Forty years later, they have failed. Socialism and democracy have been reunited. That’s why we can say today: Allende vive. Allende lives.

Today’s resurgent left in Latin America poses a real challenge to timid mainstream social democracy in North America and Europe, not to mention to the small constellation of sects clinging to the certainties of 1917 and other similarly dogmatic or scholastic leftists.

On this 40th anniversary of the coup in Chile, progressives would do well to recommit to learning about and defending the myriad left movements and elected governments of Latin America.

So don’t remember Allende just as a martyr. His descendents have learned from his terrible fate, as Greg Grandin outlined in his London Review of Books article, ‘Don’t do what Allende did.’ The headline refers to reported instructions from Fidel Castro to Hugo Chavez during the hours after the (thankfully failed) coup against Venezuela’s elected leader in 2002.

Emir Sader, the Brazilian left scholar and activist, has summed up the new generation’s political project in his essential book, The New Mole, which looks at the trajectories of today’s Latin American left. Sader explains that, having learned from the Allende government’s failure to “prepare to confront the right’s offensive with strategies for an alternative power,

…processes like those in Bolivia, Venezuela and Ecuador — at the same time as they try to implement an anti-neoliberal economic model — seek to combine this with a refounding of the state and the public sphere… it is still a process of reforms, but one that leads towards a substantial transformation of the relations of power that underpin the neoliberal state.”

It’s an enormous and worthy undertaking. We should learn from Latin America and we should join them. That’s the best way to honour the legacy of the Chileans who fell forty years ago to the enforcers of global capitalism.

rabble.ca Editor Derrick O’Keefe is a writer and social justice activist in Vancouver, BC. He is the author of the new Verso book, Michael Ignatieff: The Lesser Evil? and the co-writer of Afghan MP Malalai Joya’s political memoir, A Woman Among Warlords: The Extraordinary Story of an Afghan Who Dared to Raise Her Voice. Derrick also served as rabble.ca’s editor from 2007 to 2009. You can follow him athttp://twitter.com/derrickokeefe.