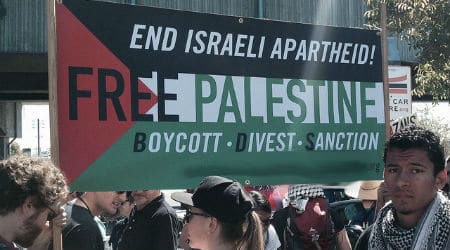 When the American Israel Public Affairs Committee (AIPAC) comes to town this week for their annual policy conference, high on the agenda of issues they’ll be pushing Congress to support are bills designed to “fight the boycott of Israel”.  This campaign to combat efforts to “boycott, divest, or sanction” Israel (BDS) has become a full-fledged national movement with AIPAC-supported initiatives moving forward not only in Congress but in two dozen state legislatures, as well.

These bills, both federal and state, are all variations on a theme designed to punish, by blacklisting or sanctions, any governments, businesses, organizations, or individuals who boycott, divest funds, or impose sanctions on Israel or Israelis or products emanating from Israel or “Israeli controlled territories”.

This campaign should be opposed for many reasons.

In the first place, it subordinates the US federal government and state governments to do the bidding of a foreign state, Israel. The bills before Congress and state legislatures closely track legislation passed in Israel in 2014. Making US government institutions into mere extensions of Israel’s Knesset is at best unbecoming and embarrassing. While Israel and its allies often complain about the UN being one-sided, they have turned the US Congress and now state legislatures into mere “coat holders and cheerleaders” acting with impunity to carry out their will.

These anti-BDS bills also have the effect of making the US a collaborator in Israel’s violations of international law by protecting Israeli settlements that have been illegally placed in occupied Palestinian lands. By conflating Israel and “the territories under Israeli control”, Congress and the state bodies that pass these bills are attempting to change long-standing US policy of not granting legitimacy to settlements built in lands Israel seized in the 1967 war.

The Congressional bills specifically criticize the policy of the European Union which has announced that products originating from the occupied territories may not be labeled as “Made in Israel”, requiring them, instead, to be marked “Made in the Occupied West Bank”. By sanctioning this EU practice, the US legislation compromises our trade relations with our European allies.

The opposition to BDS should also be seen as a violation of the time-honored right of individuals and organizations to pursue non-violent means of protest against behavior they view, in conscience, to be illegal. The US Supreme Court has upheld this right to boycott during the civil rights movement. And in the campaign against South African apartheid, US lawmakers engaged in civil disobedience to force the US government to impose sanctions on the South African government. If Israel’s settlement activity in the occupied territories is a violation of international law and convention, then what better recourse do opponents of this behavior have than to non-violently boycott, divest from, or sanction those settlements, their products, and those who build them and invest in them? The argument made by Israel and its supporters that BDS is “an unilateral act that runs counter to the search for peace” is laughable since, in reality, BDS is nothing more than a response to Israel’s “unilateral actions that run counter to the search for peace”—namely, the confiscation of Palestinian-owned land, the demolition of Palestinian homes, and the construction of Israeli colonies and roads in occupied lands that have made nearly impossible the establishment of a contiguous Palestinian state.

Finally, it should be clear that the anti-BDS legislation being supported by AIPAC is nothing more than a brazen act of hypocrisy since it, in effect, imposes sanctions on those accused of boycotting, divesting from, or sanctioning Israel. Even more hypocritical is the fact that AIPAC is also strongly supporting the 2016 Foreign Appropriations bill that includes a whole host of Congressionally mandated sanctions on the PLO, the Palestinian Authority, the United Nations and other international bodies should any of these entities pursue policies not to the liking of Congress. All of these had been pushed by AIPAC in past years. As an example, Congress was forced to deny funding to UNESCO when that body admitted the Palestinians as a member. And the Palestinian Authority is threatened with a loss of US financial support and the PLO office in Washington is threatened with closure if the Palestinians seek recognition as a member state in the United Nations or if they bring a case against Israel to the International Criminal Court.

More worrisome is the fact that as this anti-BDS campaign has gained steam, its proponents have become emboldened. The rhetoric they use has become increasingly harsh terming those who support BDS anti-Semites and equating their efforts with Nazism. A website has been created featuring the profiles of student activists who advocate BDS warning prospective employers about the dangers of hiring them upon graduation. And a new effort is underway to combat BDS on campuses by arguing that BDS is by definition a form “anti-Semitism” that should be banned.

In the end, what is playing out is the abuse of power politics at its worst. AIPAC does what they do, because they can. In the process they have put our country on a dangerous course, compromised our ability to pursue our interest in a peaceful resolution of the Israeli-Palestinian conflict, and

James J. Zogby is the president of the Arab American Institute.