A conversation with film director
JOHN JUNKERMAN
Director of the powerful new film about the enduring, bitter legacy of World War II, Okinawa: The Afterburn. Selected clips from the film will be show.

“Unarmed, nonviolent Okinawans engaged the most powerful military in the world in an antiwar, anti-base struggle that began with island-wide demonstrations in the 1950s and continues today. I was deeply moved when I first encountered this unyielding spirit of pacifism…” 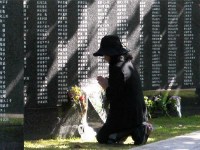 In 1945, the Japanese island of Okinawa was the site of the longest and bloodiest battle of the Pacific War. Still today, with 32 American bases, it remains a bastion of US military power in East Asia. After their island was literally burned to ashes, the Okinawan people developed a deep-seated aversion to war, but the island was fated to be the launching pad for American wars in Korea, Vietnam, and the Middle East.

Acclaimed in Japan since its June 2015 release, Okinawa: The Afterburn is the first film to provide a comprehensive picture of the battle and the ensuing occupation of the island by the US military. This revised, updated English version provides timely context for the ongoing controversy over the construction of a new Marine Corps base on Okinawa.

The film depicts the history of military dominance and popular resistance from the postwar occupation through the present. Okinawa: The Afterburn is a heartfelt plea for peace and an expression of deep respect for the unyielding spirit of the Okinawa people.

This ambitious documentary was directed by the American filmmaker John Junkerman. His previous films include Uminchu: The Old Man and the East China Sea, featuring the rugged beauty of the Okinawan island, Yonaguni; and Japan’s Peace Constitution, exploring the global significance of Japan’s pacifist national charter. In 2002, his film Power and Terror: Noam Chomsky in Our Times was the first theatrically-released film to raise critical questions about the American response to 9/11. A portion of Power and Terror was filmed in Palo Alto at a PPJC-sponsored appearance by Chomsky.

“The voices we hear are so dignified and articulate that one emerges not just with understanding and admiration, but also with hope. This is the outstanding accomplishment of Okinawa: The Afterburn.”
John W. Dower, Emeritus Professor, MIT

“A persuasive comment on the American presence all over the world. A remarkable film!”
Roger Pulvers, Australian playwright & theatre director

You are an important part of every program!

The forum really is a conversation and that includes you. So come prepared to ask questions or share your opinions.