After Abdullah: Can Saudi Arabia Reform Before It Is Too Late? 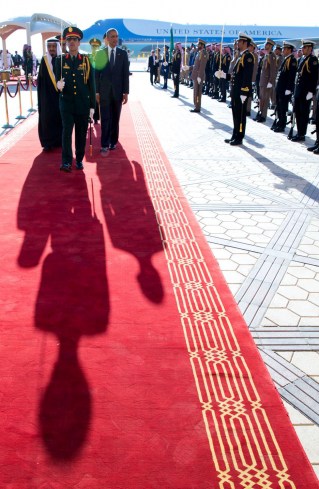 Just-deceased King Abdullah of Saudi Arabia was born in 1924, before Alexander Fleming discovered penicillin, before the first jet aircraft flight and before television, much less the Internet. When he was born, Italy, Egypt, Iran, Iraq, Yugoslavia and North Yemen were still all ruled by kings. He left behind an absolute monarchy allied with a puritanical Wahhabi clerical corps that is still attempting to rule unilaterally over some 20 million citizens and 8 million guest workers. King Abdullah initiated a handful of limited domestic reforms, but then in the last decade of his life backed off many of them, leaving his aged and ailing successor, King Salman, with little more than a policy of treading water.

Treading water is not an option. Saudi Arabia is one of the more dynamic societies in the world, beset with rapid population growth and severe class, sectarian and regional tensions. It pumps about 10 percent of all the petroleum produced in the world daily, and is by far the largest exporter. The recent downturn in oil prices will hurt, but the kingdom has substantial currency reserves, of some $750 billion. There is a cushion. Despite Saudi Arabia’s image in the outside world as a lost-in-time medieval landscape, it is in fact hyper-modern in much of its infrastructure (go to an image search engine and put in “Riyadh.”)

The wealth and progress, however, are very unequally spread around. King Abdullah had a net worth estimated at $18 billion. Yet a fifth of his subjects live in “crippling” poverty.. In the poor northern province of Hail, no new public health initiatives, such as building hospitals, have been undertaken for twenty-five years. Independent labor unions and strikes are strictly forbidden, though they do sometimes break out nevertheless. Women can only work with the permission of a male guardian and are paid a fraction of male counterparts. Guest workers often have their passports taken away by their Saudi employers, and have few rights. Saudi Arabia offers citizens free education through the doctorate for those who want it, and free healthcare, but the state does not offer the equivalent of food stamps or much in the way of direct welfare for the disadvantaged. It has recently tried to encourage skittish youth to risk entering the private sector employment market, where, unlike in the sure thing of government offices, they could be fired in a size-down, by instituting an unemployment insurance scheme.

Another divide is generational. Some estimates suggest that fully 60 percent of the population is under 21—i.e., born in the 1990s and the twenty-first century. Although official unemployment stands at about 10 percent, it is thought to be three times that among young people. A lively digital youth culture seethes beneath the platitudes of official discourse. Over half of Saudis are connected to the Iternet, and a third of those visit Twitter monthly, the highest proportion of any country in the world. The state has begun allowing the population to blow off steam about narrow policy issues on Twitter, but bloggers who go too far and advocate liberalism or secularism are in severe peril. Raif al-Badawi has been sentenced to ten years in prison and a debilitating 1,000 lashes for blogging liberal ideas, though an international outcry has prompted the monarchy to review his sentence. More worrying, thousands of Saudi youth are thought to have gone off to fight in Syria, and some of them have been recruited by radical extremist foes of the Saudi monarch, such as Daesh and the Support Front (an Al Qaeda affiliate).

King Abdullah was aware of the need for political reform and did take some tepid steps in that direction (though to be fair what looks tepid to the rest of the world is radical progressivism in a Saudi context). In 2005, on coming to the throne, he held municipal elections for the first time since 1964 (and in most of the country for the first time ever). The crown retained the prerogative of appointing half of city-council members and the mayor, however, and so had an automatic majority of loyalists. The candidates for the contested seats had to run as independents, and were elected not from the city districts they represented but at large from the whole city, violating the rule of geographic accountability. Muslim fundamentalists (who were, believe it or not, to the right of the Wahhabi Saudi monarchy) did remarkably well in these elections, possibly because the religious far right campaigned for its candidates by sending around “golden lists” of their names through SMS texting. Aside from radical extremists such as Daesh or ISIL, the Wahhabi branch of Islam is the most narrow and literal-minded, the most resistant to liberal reform and the most hostile to other Muslim denominations and to non-Muslims. But it is on the whole loyal to the Saudi establishment, unlike the radicals.

In the Shiite areas of the Eastern Province, in cities such as Qatif, for the first time Shiite politicians had a direct say in urban policy and some restrictions on the practice of Shiism were lifted. Saudi Arabia probably has a Wahhabi majority in its citizen population, but many residents of the western Hijaz province are Sunnis and mystical Sufis, and 12 percent are Shiites, mainly in the east. The municipal elections acknowledged the pluralism of actual Saudi society in useful ways. Perhaps because of the far-right fundamentalist sweep in the capital and other important cities, and because King Abdullah grew increasingly suspicious of populist political Islam after the rise of Al Qaeda, the experiment in municipal elections, the next such elections were postponed and not held when due in 2009.

After the youth revolts of early 2011, the king appears to have hoped to allow voters to blow off steam by repeating the municipal elections in fall of that year. But the limited power of the elected representatives led to low voter turnout. The campaign of women for the vote in 2011, and the pressure of the Arab upheavals, appears to have changed the monarch’s mind about the women’s vote. Probably more important than the toothless elections of 2011 in calming down scattered protests in the kingdom in 2011 was the announcement of tens of billions of dollars in new social spending.

When, after the Arab youth revolutions, the republican Muslim Brotherhood swept to power in Egypt in 2012, Abdullah appears to have been extremely alarmed that a similar upheaval could take place in his own kingdom and even sweep away the House of Saud. He conspired with the Egyptian officer corps to stage the 2013 military coup and to see that the Muslim Brotherhood was outlawed in the Gulf and Egypt as a “terrorist organization.” The Brotherhood gave up violence in the 1970s, however, and is not a terrorist group now. What King Abdullah and his ally, President General Abdel Fattah al-Sisi of Egypt, really meant when they instituted those decrees was that the Muslim Brotherhood has a strong appeal to Muslim electorates and a revolutionary agenda, so that it is a threat to the Middle Eastern status quo.

The other target of the late monarch’s wrath was the uppity Shiites of his own Eastern Province, along with those of Bahrain and Yemen, whom he appears to have seen as cat’s paws of Iran. Abdullah was actually improving his relations with the Saudi Shiites in the first years of his reign, appointing some to the Shura Council and allowing elected municipal authorities to loosen restrictions on Shiite ritual practice in the Eastern Province. But in 2009 he forbade the building of any new Shiite mosques. With the protests of 2011 and after, he cracked down hard on dissident Saudi Shiites. Also in 2011, he sent troops in to prop up the minority Sunni elite of Bahrain, which has steadfastly refused to share power with its Shiite majority. His interventions against the Zaidi Shiites of Yemen, who developed an anti-Wahhabi radical Houthi wing, failed to curb the movement, which has now taken over northern Yemen. For his largely unsuccessful regional contest with Shiite Iran, see my article in The Nation of early January.

In 2011, as noted, King Abdullah took the controversial step of decreeing that women would be able to vote and stand for office in the municipal elections scheduled for 2015, as well as to serve on the 150-member national appointed senate, the Shura Council. In 2009, the monarch founded the King Abdullah University of Science and Technology, which is, unprecedentedly coeducational. Abdullah founded large numbers of female-only colleges, to the extent that a majority of the nearly 1 million university students in Saudi Arabia are now women and a third of public sector jobs are held by women. Because of the system of male guardianship, only those with supportive husbands and fathers can work outside the home. Still, a growing female professional class does cater to women in a gender-segregated society where men are at a disadvantage in meeting with clients of the opposite sex. Unlike in the rest of the Muslim world, women still cannot drive, though perhaps politicians will change local regulations preventing the issuance of drivers licenses to women once they begin wooing that constituency. Whether this change in voting rights is viewed by historians as significant will depend on whether it is actually implemented and whether significant, above-board elections are held.

Authoritarian government typically is beset by corruption and inefficiency, because of inadequate means for the public to criticize and complain. That lack of a feedback loop helps explain the collapse of the Soviet Union in 1989–91 and the remarkable series of popular revolutions (Iran, Tunisia, Egypt, Tunisia, Libya, Syria and Yemen) in the Middle East. Turkey’s extremely corrupt government of the 1990s was tossed out of power, in contrast, at the ballot box in 2002. Meaningful elections add to stability rather than detracting from them, as authoritarian elites such as those in Saudi Arabia imagine. Saudi Arabia’s oil wealth, however vast it may be, is so poorly distributed, among provinces, sects and social classes, that it cannot be assumed forever to buy stability. If King Salman wants to undo some of the mistakes and half-hearted reforms of his predecessor in quest of a more assured future for the kingdom, he could begin by moving to free and fair elections for the Shura Council or national legislature. Failing to do so, and hoping to make the mistakes of the Mubaraks, Salehs, Ben Alis and Qaddafis without suffering their fate, is playing Russian roulette with the world’s most important energy economy.