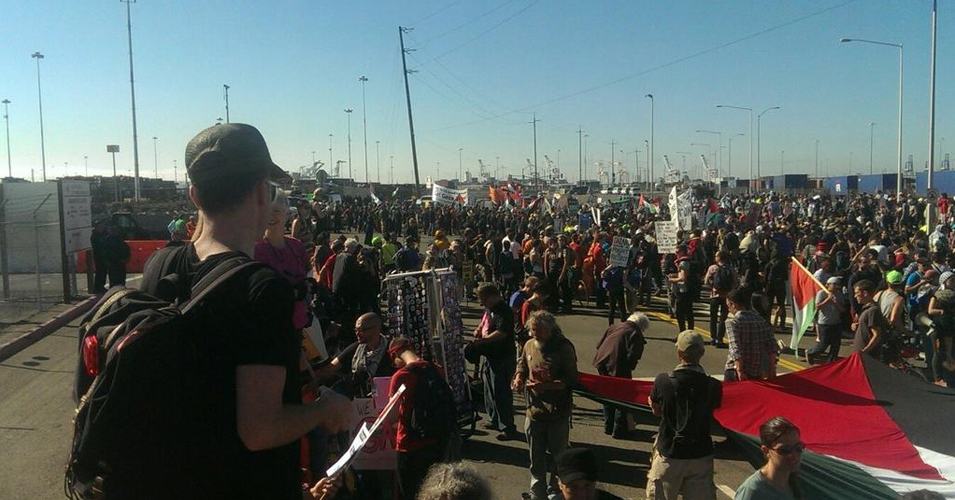 Thousands of pro-Palestinian activists have successfully blocked an Israeli ship that was scheduled to dock at the port of Oakland in California on Saturday.

The boat had been expected to dock in the early morning hours and protesters had planned to show up at 5:00 am Saturday morning to block the ship. But as word spread that the ship had delayed its arrival at Oakland in an apparent attempt to avoid the protest the protest was pushed back until 3:00pm.

The protesters plan to form a picket line to prevent work crews from unloading the ship, if, and when it docks.

Activists interpreted the delay as a victory since the schedule change seemed to have been made in response to the planned pickets. “We have stopped the Zim Piraeus from docking on the west coast of the United States,” said Eyad, of the Arab Resource and Organizing Center (AROC), into a megaphone, drawing cheers from the crowd as the march came to a halt on a bridge leading towards the docks.

“Zim Lines is the largest Israeli shipping company, and it’s a huge flow of capital for the state of Israel,” said Lara Kiswani, executive director of the center, whose organization was one of 70 to take part in planning the blockade.

Kiswani said the action was meant to generate momentum for a broader campaign calling for boycott, divestment and sanctions against the Israeli government as a response to violence in Gaza. “With the recent attacks on Palestine … there’s been a lot of discussion locally, particularly with AROC, on how to escalate our tactics,” she said.

A similar blockade against a Zim vessel took place in 2010, when pro-Palestinian activists formed picket lines in response to Israel’s attack on a flotilla ferrying humanitarian outreach workers to Gaza. “After the flotilla was attacked by the state of Israel, we successfully were able to block the Zim Lines ship here, with the ILWU,” Kiswani said. “So for years we were working with ILWU, with rank and file, and with the leadership, to try and raise awareness about the plight of Palestinians.” In 1984, she added, “ILWU took a position against apartheid, and the workers refused to unload that ship”.

As the march reached the port entrance, where activists had originally planned to stage a picket, they encountered a line of police officers standing in formation. Protesters erupted into chants of, “hands up, don’t shoot!” – echoing chants sounded in response to police violence directed against street protesters in Ferguson, Missouri, in the wake of the fatal police shooting of 18-year-old Michael Brown.

Several others made statements linking recent acts of police brutality with the conflict in Gaza. “On Twitter, we’ve seen people in Gaza tweet to protesters in Ferguson how to cope with teargas,” said Mohamed Shehk, who helped organize the blockade with the Oakland-based nonprofit Critical Resistance. “They’re saying things like, ‘as Palestinians, we know what it’s like to be targeted and killed for being of the wrong ethnicity’.”

Block the Boat organizers are targeting Zim Lines for it’s history of supporting Israel’s occupation and subjugation of Palestinians.

“From its founding in 1945 by the Jewish Agency for Israel and the Histradut, Zim has served Israeli settler-colonialism, bringing settlers to Palestine and serving as Israel’s only maritime connection during the 1948 war, supplying ‘food, freight, and military equipment’ used of course to carry out the Nakba. The worldwide commerce conducted by Zim today funds the occupation of Palestine with revenue generated on every continent,” organizers wrote in a statement issued by Block the Boat.