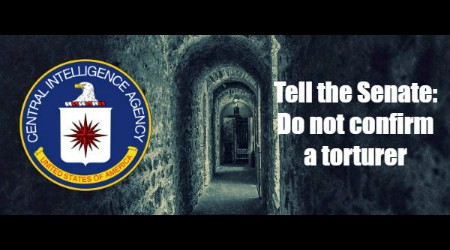 Trump’s nominee for CIA Director, Gina Haspel, played a central role in the CIA’s shameful torture program and destroyed evidence to cover it up.
Sign a letter to your Senators urging them to vote no on Gina Haspel’s confirmation

Background from ACLU: Gina Haspel is perhaps best known for running a “black site” prison in Thailand, where she oversaw state-sponsored torture at the start of a program designed at the behest of the CIA and approved at the highest levels of the George W. Bush administration. It was at this facility that the agency’s brutal tactics were first tested.

Throughout this horror, Haspel reported to CIA headquarters on progress — including the failure to get any meaningful intelligence. Her participation was reportedly hands on.

Haspel played a key role in the destruction of evidence of the torture crimes that she herself had overseen in her prior CIA job. The general counsel of the 9/11 Commission has stated that the destruction of the videos may have amounted to obstruction of justice. (Source – ACLU: What the Senate Needs to Know About Gina Haspel)

Action: PPJC has drafted a short and direct letter that will be sent directly to your U.S. Senators. You can sign it as is or add your own comments.