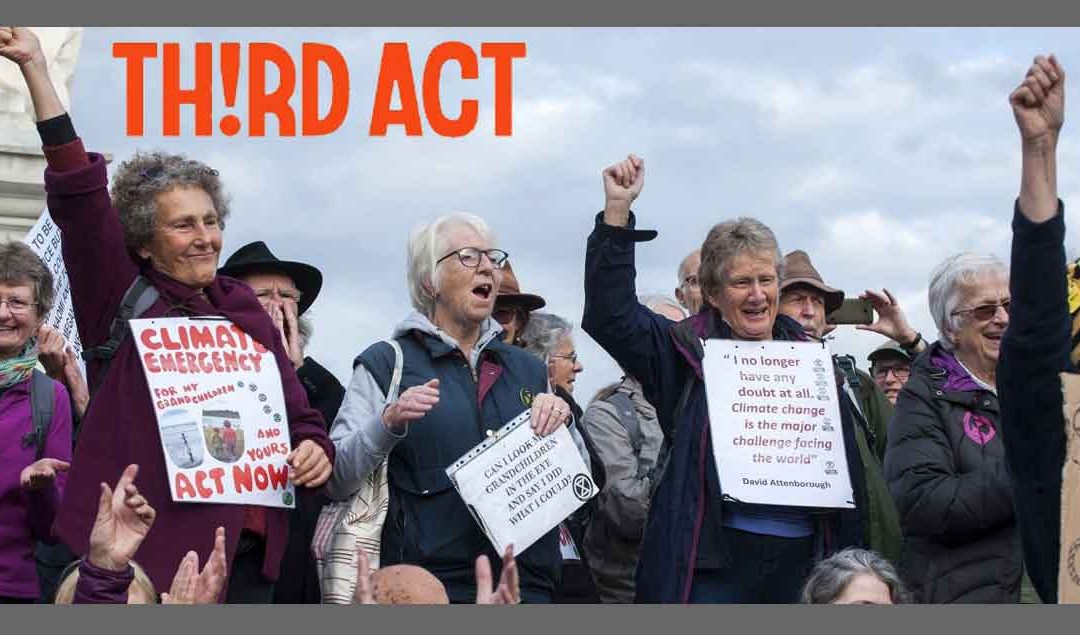 “Older Americans will not win these fights alone; we want to back up younger leaders,” said Bill McKibben, founder of a new group for organizers over 60. “But these fights won’t be won without us either.”

Third Act, a new U.S.-based group that aims to harness the unique skills and resources possessed by people over 60 to advance the struggle for progressive change and climate justice, is set to have its first national organizing call on Tuesday night at 8:00 pm ET.

Those interested in joining the webinar must register ahead of time. Speakers include Third Act president Vanessa Arcara, lead advisor Akaya Windwood of the Just Economy Institute, and renowned environmentalist Bill McKibben, who helped start the group three months ago. There will also be music by Lester Chambers and others.

In a blog post promoting Tuesday night’s launch event, McKibben wrote that discussions will focus on “how to organize local groups, how we’re going to start taking on voting rights and climate issues, where to buy the cool t-shirts.”

“But mostly we’re going to talk about building for duration, about figuring out how to go the distance,” McKibben continued. “Because we know we’re not going to win the fight to stabilize the climate, or to stabilize our democracy, overnight. We have to win them pretty fast—else we run the real risk of sliding into something like hell or something like authoritarianism—but we also need to build for at least a decade’s worth of the long haul.”

“We need your support—tune in tonight, and tell your parents, grandparents, aunts, and uncles,” he added. “Older Americans will not win these fights alone; we want to back up younger leaders. But these fights won’t be won without us either. Solidarity. Forever.”

Each day in the U.S., 10,000 people “pass the 60-year mark,” Third Act explains on its website. “There’s no way to make the changes that must be made to protect our planet and our society unless we bring the power of this group into play.”

“We’re used to thinking that humans grow more conservative as they age, perhaps because we have more to protect, or simply because we’re used to things the way they are,” notes the group. “But our generations saw enormous positive change early in our lives—the civil rights movement, for instance, or the fight to end massive wars or guarantee the rights of women. And now we fear that the promise of those changes may be dying, as the planet heats and inequality grows.”

“As a generation,” the group says, “we have unprecedented skills and resources that we can bring to bear. Washington and Wall Street have to listen when we speak, because we vote and because we have a large—maybe an overlarge—share of the country’s assets. And many of us have kids and grandkids and great-grandkids: we have, in other words, very real reasons to worry and to work.”