ACLU: Is it Okay to Kick People Out of Campaign Rallies? That Depends. 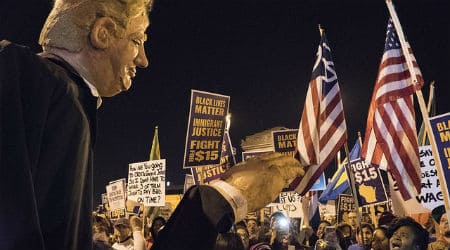 While there may not be a single policy issue this year’s presidential candidates can agree on, there does seem to be a bipartisan consensus on one thing: Protest will not be tolerated at campaign rallies.

The Trump campaign has gotten the most publicity for removing protesters, in part because of the violence and racial slurs with which Trump supporters have repeatedly confronted detractors. But the campaigns of Hillary Clinton, Ted Cruz, and Bernie Sanders have also kicked people out for expressing views that don’t amount to unequivocal support. Too often, these removals have had a racial component.

This election takes place in the #BlackLivesMatter era, and anti-immigrant and anti-Muslim sentiments have all too often taken center stage. As a result, many of the protesters marched out by police have been people of color, leading to some upsetting images. That’s certainly not what we want our democracy to look like.

Campaign events are open to the general public, so the nondiscrimination laws that apply in all places of public accommodation govern them. A campaign can no more exclude people based on their race or religion than a restaurant can refuse to serve them on that basis.

Here’s the thing, though: Campaigns can opt to exclude protesters from campaign rallies. The First Amendment doesn’t stop them — in fact, the First Amendment protects the campaign’s right to control its message. Generally, a campaign rents space for its rallies, which gives it the right to exclude people for “trespass” as well as get  law enforcement’s help to do so.

A campaign can declare someone to be a trespasser if their presence interferes with the campaign’s chosen message. At a rally, for instance, enthusiastic sign-waving can be a requirement of attendance. A campaign has the right to control its own political theater, within the limits of nondiscrimination law. Deeming someone trying to attend a rally to be a protester because of her race or religion would, of course, violate the law.

In other words: Campaigns can exclude based on viewpoint, but not based on race. What about government actors, like law enforcement? They can enforce trespass law, so if the Clinton campaign tells police to keep out everyone wearing t-shirts with purple writing, police can prevent those people from entering. But police can’t take it upon themselves to exclude protesters absent a specific directive from the campaign. Nor can they exclude all Black students or all women in hijab, even if they assume those people to be protesters.

What all this means is that particular facts really matter in evaluating these incidents. Whether or not police or campaign staffers were acting lawfully when they removed someone depends on the way that decision was made, which we usually can’t determine by watching available video footage.

Let’s remember, however, that campaign events are milestones in our democratic process. Regardless of the legality of excluding protesters from inside campaign rallies, the events of the last few weeks have shown that people feel a particularly profound need to express themselves during election season, and they’re going to figure out ways to do that. Campaigns, of course, have no right to control the messages expressed in public spaces outside rallies.

One of the candidates will end up president, and he or she will take an oath to uphold the Constitution and the Bill of Rights. Presidents absolutely may not exclude people from government-sponsored events because of their peaceful expression, their beliefs, or their race. It would be nice to see free speech and nondiscrimination values at play in the run-up to the presidency as well.