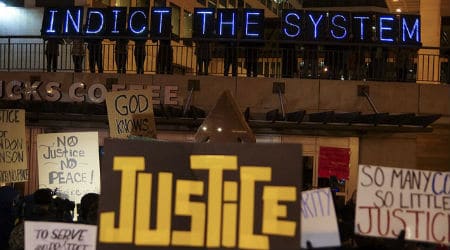 It has been a year since the tragic events in Ferguson, Missouri galvanized the nation and the world. Any fears that the passage of time would relegate the issues of police abuses inflicted upon people of color and the importance of respecting the intrinsic value of Black lives to the back burner have proved unfounded.

Part of the reason for continued attention is constructive and positive. The growth of #BlackLivesMatter and other grassroots movements as well as the essays of Ta-Nehisi Coates and other commentators have all contributed to keeping these issues in the public eye. But sadly, the issue of the inappropriate use of force by law enforcement against unarmed Black people has been kept current by the relentless repetition of those deaths over the time since the killing of Michael Brown. Sadly, Ferguson no longer refers to a town in Missouri. It has entered the popular lexicon as a synonym for police brutality against Black people.

Two of the most recent controversial #BlackLivesMatter incidents illustrate the host of reasons for the continuing and growing need to take steps to confront the systemic reasons for the killing of Black people after interactions with the police. The death of Sandra Bland, whether or not it was by her own hand, was the result of a chain of events precipitated by the overly aggressive and unnecessary actions of a police officer. Her death reaffirms what many have been saying for a long time: It’s not only Black men who are subject to abusive policing and that the deaths are the result of an inappropriately aggressive and confrontational style of policing too often used in or against members of communities of color. The shooting of Sam Dubose in Cincinnati following on the heels of Bland’s death provided another reminder of the tragedy that can result from an overly aggressive and completely inappropriate policing style.

Perhaps the speedy indictment of Officer Tensing for DuBose’s death is a sign of progress during a time when criminal prosecution of officers whose actions result in the deaths of Black people are by no means guaranteed. Cincinnati Prosecutor Joseph Deters should be praised for bringing about the indictment so quickly and for the outrage that he expressed in announcing it.

But other parts of the announcement were highly unsettling.

His description of the event as “something that does not happen in the United States” casts DuBose’ death as an isolated and anomalous act of a single police officer. This statement is jarringly at odds with the dozens of similar incidents all across the country over the last year. Frustratingly, at least two of Tensing’s fellow officers corroborated the story so clearly disproved by the videotape.

It appears unlikely that either case would have received the notice that it did without the videotape evidence questioning the veracity of the reports filed by the officers in these cases. Body cameras are important but only as a first step. Personal accountability for inappropriate use of force is more important.

How many cops involved in #BlackLivesMatter incidents have gotten off scot free? This question isn’t only important for accountability’s sake, but also to ensure bad cops cannot hurt anyone.

We cannot continue to wear blinders when it comes to the continuing problems in law enforcement in the United States. These tragedies are the predictable outcomes of a policing culture which too often mistakenly judges the danger that Black people represent, that fails to respect the humanity of Black people, that resorts to the use of deadly force reflexively, and that closes rank around officers whose actions run afoul of the law and proper police actions.

Acknowledging that culture is the necessary first step along with accountability for all law enforcement agents. Police officers are charged with enforcing the law, but note — they are not the law. When officers violate that law, they should be held accountable, including any officer who deliberately colludes in an attempt to obscure illegal actions by a fellow officer. When they are not, they make a mockery of the law.

As is often the case, the satirical publication the Onion best captures the problem at the core of the misconduct of too many law enforcement agents in the piece, “Do You Know Why I’m Pulling You Over, Being Wildly Aggressive, And Charging You With Assault Today, Sir?”. With particular regard to the policing of communities of color, we must learn from the post-Ferguson era. We must work to eradicate the corrosive culture that often exists by collecting data, appropriately using recording devises, training and holding law enforcement responsible for violations of the law.

But before we can do any of that effectively, we must face up to the fact that, for too many people and on too many occasions, Sam Dubose’s story is one of the defining narratives of the United States.

Dennis Parker is director of the ACLU Racial Justice Program, leading its efforts in combating discrimination and addressing other issues with a disproportionate impact on communities of color.