A Message From the Dispossessed 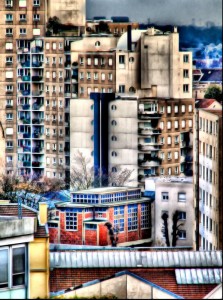 The terrorist attack in France that took place at the satirical newspaper Charlie Hebdo was not about free speech. It was not about radical Islam. It did not illustrate the fictitious clash of civilizations. It was a harbinger of an emerging dystopia where the wretched of the earth, deprived of resources to survive, devoid of hope, brutally controlled, belittled and mocked by the privileged who live in the splendor and indolence of the industrial West, lash out in nihilistic fury.

We have engineered the rage of the dispossessed. The evil of predatory global capitalism and empire has spawned the evil of terrorism. And rather than understand the roots of that rage and attempt to ameliorate it, we have built sophisticated mechanisms of security and surveillance, passed laws that permit the targeted assassinations and torture of the weak, and amassed modern armies and the machines of industrial warfare to dominate the world by force. This is not about justice. It is not about the war on terror. It is not about liberty or democracy. It is not about the freedom of expression. It is about the mad scramble by the privileged to survive at the expense of the poor. And the poor know it.

If you spend time as I have in Gaza, Iraq, Yemen, Algeria, Egypt and Sudan, as well as the depressing, segregated housing projects known as banlieues that ring French cities such as Paris and Lyon, warehousing impoverished North African immigrants, you begin to understand the brothers Cherif Kouachi and Said Kouachi, who were killed Friday in a gun battle with French police. There is little employment in these pockets of squalor. Racism is overt. Despair is rampant, especially for the men, who feel they have no purpose. Harassment of immigrants, usually done by police during identity checks, is almost constant. Police once pulled a North African immigrant, for no apparent reason, off a Paris Metro subway car I was riding in and mercilessly beat him on the platform. French Muslims make up 60 to 70 percent of the prison population in France. Drugs and alcohol beckon like sirens to blunt the pain of poor Muslim communities.

The 5 million North Africans in France are not considered French by the French. And when they go back to Algiers, Tangier or Tunis, where perhaps they were born and briefly lived, they are treated as alien outcasts. Caught between two worlds, they drift, as the two brothers did, into aimlessness, petty crime and drugs.

Becoming a holy warrior, a jihadist, a champion of an absolute and pure ideal, is an intoxicating conversion, a kind of rebirth that brings a sense of power and importance. It is as familiar to an Islamic jihadist as it was to a member of theRed Brigades or the old fascist and communist parties. Converts to any absolute ideal that promises to usher in a utopia adopt a Manichaean view of history rife with bizarre conspiracy theories. Opposing and even benign forces are endowed with hidden malevolence. The converts believe they live in a binary universe divided between good and evil, the pure and the impure. As champions of the good and the pure they sanctify their own victimhood and demonize all nonbelievers. They believe they are anointed to change history. And they embrace a hypermasculine violence that is viewed as a cleansing agent for the world’s contaminants, including those people who belong to other belief systems, races and cultures. This is why France’s far right, organized aroundMarine Le Pen, the leader of the anti-immigrant Front National, has so much in common with the jihadists whom Le Pen says she wants to annihilate.

When you sink to despair, when you live trapped in Gaza, Israel’s vast open-air prison, sleeping 10 to a floor in a concrete hovel, walking every morning through the muddy streets of your refugee camp to get a bottle of water because the water that flows from your tap is toxic, lining up at a U.N. office to get a little food because there is no work and your family is hungry, suffering the periodic aerial bombardments by Israel that leaves hundreds of dead, your religion is all you have left. Muslim prayer, held five times a day, gives you your only sense of structure and meaning, and, most importantly, self-worth. And when the privileged of the world ridicule the one thing that provides you with dignity, you react with inchoate fury. This fury is exacerbated when you and nearly everyone around you feel powerless to respond.

The cartoons of the Prophet in the Paris-based satirical weekly Charlie Hebdo are offensive and juvenile. None of them are funny. And they expose a grotesque double standard when it comes to Muslims. In France a Holocaust denier, or someone who denies the Armenian genocide, can be imprisoned for a year and forced to pay a $60,000 fine. It is a criminal act in France to mock the Holocaust the way Charlie Hebdo mocked Islam. French high school students must be taught about the Nazi persecution of the Jews, but these same students read almost nothing in their textbooks about the widespread French atrocities, including a death toll among Algerians that some sources set at more than 1 million, in the Algerian war for independence against colonial France. French law bans the public wearing of the burqa, a body covering for women that includes a mesh over the face, as well as the niqab, a full veil that has a small slit for the eyes. Women who wear these in public can be arrested, fined the equivalent of about $200 and forced to carry out community service. France banned rallies in support of the Palestinians last summer when Israel was carrying out daily airstrikes in Gaza that resulted in hundreds of civilian deaths. The message to Muslims is clear: Your traditions, history and suffering do not matter. Your story will not be heard. Joe Sacco had the courage to make this point in panels he drewfor the Guardian newspaper. And as Sacco pointed out, if we cannot hear these stories we will endlessly trade state terror for terror.

“It is a sad state of affairs when Liberty means the freedom to insult, demean and mock people’s most sacred concepts,” the Islamic scholar Hamza Yusuf, an American who lives in California, told me in an email. “In some Latin countries people are acquitted for murders where the defendant’s mother was slandered by the one he murdered. I saw this in Spain many years ago. It’s no excuse for murder, but it explains things in terms of honor, which no longer means anything in the West. Ireland is a western country that still retains some of that, and it was the Irish dueling laws that were used in Kentucky, the last State in the Union to make dueling outlawed. Dueling was once very prominent in the West when honor meant something deep in the soul of men. Now we are not allowed to feel insulted by anything other than a racial slur, which means less to a deeply religious person than an attack on his or her religion. Muslim countries are still governed, as you well know, by shame and honor codes. Religion is the big one. I was saddened by the ‘I’m Charlie’ tweets and posters, because while I’m definitely not in sympathy with those misguided fools [the gunmen who invaded the newspaper], I have no feeling of solidarity with mockers.”

Charlie Hebdo, despite its insistence that it targets all equally, fired an artist and writer in 2008 for an article it deemed to be anti-Semitic.

Shortly after the attacks of 9/11, while living in Paris and working as a reporter for The New York Times, I went to La Cité des 4,000, a gray housing project where North African immigrants lived in apartments with bricked-up windows. Trash littered the stairwells. Spray-painted slogans denounced the French government as fascist. Members of the three major gangs sold cocaine and hashish in the parking lots amid the burned-out hulks of several cars. A few young men threw stones at me. They chanted “Fuck the United States! Fuck the United States! Fuck the United States!” and “Osama bin Laden! Osama bin Laden! Osama bin Laden!” By the door of an elderly Jewish woman’s apartment someone had spray-painted “Death to the Jews,” which she had whitewashed out.

In the banlieues Osama bin Laden was a hero. When news of the 9/11 attacks reached La Cité des 4,000—so named because it had 4,000 public housing apartments at the time of its construction—young men poured out of their apartments to cheer and chant in Arabic, “God is great!” France a couple of weeks earlier had held the first soccer match between a French and an Algerian team since Algeria’s war of independence ended in 1962. The North Africans in the stadium hooted and whistled during the French national anthem. They chanted, “Bin Laden! Bin Laden! Bin Laden!” Two French ministers, both women, were pelted with bottles. As the French team neared victory, the Algerian fans, to stop the game, flooded onto the field.

“You want us to weep for the Americans when they bomb and kill Palestinians and Iraqis every day?” Mohaam Abak, a Moroccan immigrant sitting with two friends on a bench told me during my 2001 visit to La Cité des 4,000. “We want more Americans to die so they can begin to see what it feels like.”

“America declared war on Muslims a long time ago,” said Laala Teula, an Algerian immigrant who worked for many years as a railroad mechanic. “This is just the response.”

It is dangerous to ignore this rage. But it is even more dangerous to refuse to examine and understand its origins. It did not arise from the Quran or Islam. It arose from mass despair, from palpable conditions of poverty, along with the West’s imperial violence, capitalist exploitation and hubris. As the resources of the world diminish, especially with the onslaught of climate change, the message we send to the unfortunate of the earth is stark and unequivocal: We have everything and if you try to take anything away from us we will kill you. The message the dispossessed send back is also stark and unequivocal. It was delivered in Paris.

Chris Hedges writes a regular column for Truthdig.com. Hedges graduated from Harvard Divinity School and was for nearly two decades a foreign correspondent for The New York Times. He is the author of many books, including: War Is A Force That Gives Us Meaning, What Every Person Should Know About War, and American Fascists: The Christian Right and the War on America.  His most recent book is Empire of Illusion: The End of Literacy and the Triumph of Spectacle.