A Message From Russians Against the War 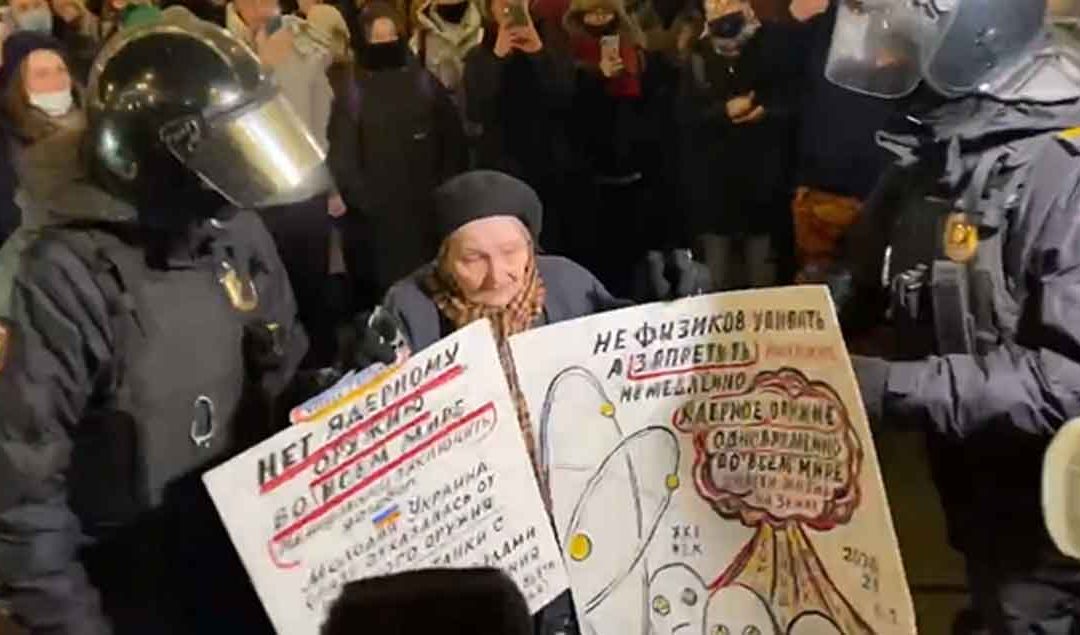 There is only one way to prevent these catastrophes. We ourselves, the men and women of Russia, have to stop this war. This country belongs to us, not a handful of distraught old men with palaces and yachts. It is time to take it back.

By Socialists Against the War Coalition

The Russian government betrayed its promises of peace and stability, leading the country into war and economic catastrophe.

Like any war in history, this one divides us all into poles: for and against. Kremlin propaganda tries to convince us that the nation is united behind the government — and that it is the pathetic renegades, the pro-Western liberals and the enemy mercenaries who demand peace. This is an untenable lie. This time, the elders of the Kremlin are in the minority. Most Russians do not want a fratricidal war, even among those who still trust the Russian government. They close their eyes as best they can, so as not to see how the world drawn by Russia’s propagandists disintegrates before them. Many still hope that this is not a war, much less an aggressive one, but a “special operation” designed to “liberate” the Ukrainian people. Terrible footage of brutal bombing and shelling of cities will soon destroy these myths. And then even Vladimir Putin’s most loyal voters will say: we did not give you consent to this unjust war!

Already today, tens of millions of people all over the country have expressed their horror and disgust at the actions of the Putin administration. These are people of various persuasions. Most, as the propagandists claim, are not liberals. Among them are a great many people of leftist, socialist, or communist views. And of course, these people — the majority of our people — are true patriots.

We are told that the opponents of this war are hypocrites — that they stand not against the war, but for the West. This is a lie. We have never been supporters of the United States and its imperialist policies. When Ukrainian troops shelled Donetsk and Luhansk, we were not silent. Nor will we be silent now, when Kharkiv, Kiev, and Odessa are being bombed on the orders of Putin and his camarilla.

There are so many reasons to fight against the war. For us advocates of social justice, equality, and freedom, several are especially important.

— This is an unjust invasion. No threat to the Russian state exists that would warrant sending our soldiers to kill and die. They are not “liberating” anyone. They are not helping any popular movement. They are nothing but a regular army tearing down peaceful Ukrainian towns at the behest of a handful of billionaires who dream of keeping their grip on Russia forever.
— This war produces incalculable disasters for our peoples. Both Ukrainians and Russians are paying for it dearly with their blood. Long after the dust has settled, poverty, inflation, and unemployment will affect everyone. It is not the oligarchs and bureaucrats who will foot the bill, but poor teachers, workers, pensioners, and the unemployed. Many of us will have no means to feed our children.
— This war will turn Ukraine into rubble and Russia into a prison. The opposition media have already been shut down. People are put behind bars for sharing leaflets, innocuous pickets, even for posts on social networks. Soon, Russians will have only one choice: prison or enlistment. War produces dictatorships unlike any that living generations have seen.
— This war multiplies all the risks and threats to our country. Even Ukrainians who a week ago sympathized with Russia are now enlisting in the militia to fight our troops. With his aggression, Putin has undermined critiques of the crimes of Ukrainian nationalists, and all the intrigues of United States and NATO hawks. Putin has given them the justifications for putting new missiles and military bases along our borders.
— Finally, fighting for peace is the patriotic duty of every Russian. Not only because we are the custodians of the memory of the worst war in history, but also because this war threatens the integrity and very existence of Russia.

Putin is seeking to connect his own fate with the fate of our country. If he succeeds, then his inevitable defeat will be the defeat of the entire nation. Then, we may indeed face the fate of postwar Germany: occupation, territorial division, the cult of collective guilt.

There is only one way to prevent these catastrophes. We ourselves, the men and women of Russia, have to stop this war. This country belongs to us, not a handful of distraught old men with palaces and yachts. It is time to take it back. Our enemies are not in Kiev and Odessa, but in Moscow. It is time to kick them out. War is not Russia. War is Putin and his government. That is why we, Russian socialists and communists, are against this criminal war. We want to stop it in order to save Russia.