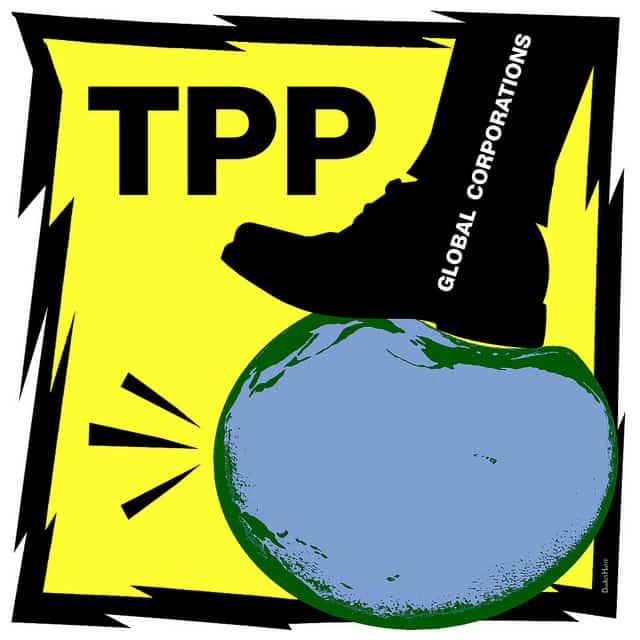 When I was a tyke, Momma warned me not to eat anything unless I knew where it came from. That advice is so sensible that even Congress acted on it in 2002, passing a straightforward law called Country Of Origin Labeling. COOL requires meat marketers to tell us whether the meat they sell is a product of the USA, China or Whereintheworldistan.

This useful information empowers us consumers — which is why globalagribusiness giants hate it and are trying to get a secretive, autocratic, plutocratic, private court in Switzerland to kill it.

This can’t be, you say? But it is. Unbeknownst to most Americans, when the U.S. joined the World Trade Organization in 1999, we surrendered a big chunk of our sovereignty to this corporate court.

Here’s what’s happening: (1) American consumers have a basic right to know where their meat comes from, but (2) that right has been pitted against American corn flakes and ketchup in a “trade war” that (3) is being forced upon us by a handful of corporations that produce, slaughter, butcher and package meat outside of our country but (4) are allowed under trade agreements to challenge a U.S. law that had been duly enacted for the people inside our country, so (5) America was sued in an obscure, autocratic, private organization created by and for corporate interests and headquartered in Switzerland. Then (6) that corporate “court” did indeed rule that the “profit right” of foreign meat packers is superior to our people’s basic right of self-determination.

Holy Tom Paine, this is corporate tyranny! But it’s about to get worse, for President Obama and Congress intend to hang another bad trade deal, the Trans-Pacific Partnership, around our necks this spring.

What? You haven’t heard of the TPP? Dubbed “a corporate coup d’etat” by Public Citizen’s Global Trade Watch, it’s a grandiose grab for power masked as a trade deal, allowing an unprecedented level of global corporate rule over Americans. One reason we commoners don’t know about it is that the corporate and governmental elites of the 12 nations that have been negotiating this momentous deal in strict secrecy, not only are keeping us in the dark but also Congress.

Another reason, however, is that the mass media has been shockingly silent, apparently even incurious about what clearly is a huge story with historic consequences. FAIR, the excellent watchdog group that tracks media coverage,found that ABC, CBS, CNN, Fox and NBC have offered the American public practically zero to little news stories about TPP. Even though the looming power grab has now spawned protests around the world, generated a major coalition of some 500 grassroots groups in our country loudly opposing the ripoff deal and has produced an odd-bedfellow, a rare bipartisan alignment of opponents in Congress, there’s been a TV blackout. Could it possibly be that the global conglomerates that own our so-called “news” networks don’t want us knowing what’s up behind TPP’s closed doors?

Let’s do the media’s job for them and find out what’s in this bad deal:

Of the document’s 29 chapters, only five address tariffs and other actual trade matters. The other 24 consist of various ways to “free” corporations from any accountability and from any responsibility to the world community’s common good.

TPP dictates that all corporations based in any member nation must be given equal access to the public dollars that any government spends on equipment, food, highway projects, etc. Thus, our own national, state and local governments would no longer be free to give preference to suppliers of our choice. “Buy American” and “Buy Local” programs could be challenged by private corporations.

If anyone doubts this pact is a corporate boondoggle dressed in trade clothes, let them read its shameful financial provisions. Our nation’s financial regulations would have to be “harmonized” to comply with TPP’s extreme deregulation, re-creating the anything-goes Wall Street ethic that crashed the world economy in 2008.

To help stop this anti-democratic nasty, go to www.exposethetpp.org.

National radio commentator, writer, public speaker, and author of the book,Swim Against The Current: Even A Dead Fish Can Go With The Flow, Jim Hightower has spent three decades battling the Powers That Be on behalf of the Powers That Ought To Be – consumers, working families, environmentalists, small businesses, and just-plain-folks.