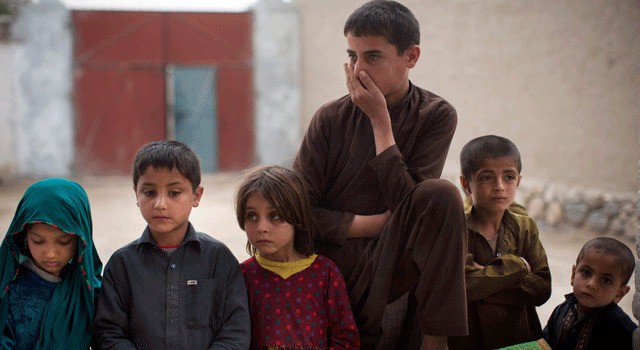 In this Wednesday, March 20, 2013 photo, the grandson of Afghan villager Ghulam Rasool, 12 year old Ahmed Shah, center, recalled the attack on his village in the yard of his house where he and his family found refuge in the village of Khalis Family Village, Nangarhar province, Afghanistan. (Photo: AP)

Recent reports on US drone strikes by Amnesty International, Human Rights Watch and the UN have heightened international awareness about civilian casualties and have resulted in new calls for redress. The Amnesty International drone report “Will I be next?” says the US government should ensure that victims of unlawful drone strikes, including family members, have effective access to remedies, including restitution, compensation and rehabilitation. The Human Rights Watch report “Between a Drone and Al-Qaeda” calls on the US government to “implement a system of prompt and meaningful compensation for civilian loss of life, injury, and property damage from unlawful attack.”

Several human rights groups have approached lawmakers asking them to sponsor legislation calling for such a fund. But congresspeople have been reluctant to introduce what they consider a losing proposition. Even maverick Congressman Alan Grayson, who is hosting a congressional briefing for drone victims from Pakistan on October 29, turned down the idea. “There’s no sympathy in this Congress for drone strike victims,” he said.

But unbeknownst to Grayson, the human rights groups and drone strike victims themselves, Congress already has such a fund.

The peace group CODEPINK recently discovered that every year for the past four years, a pot of $10 million has been allocated for Pakistani drone strike victims. That would make a total of $40 million, quite a hefty sum to divide among a few hundred families. But it appears that none of this money has actually reached them.

The Pakistani Civilian Assistance Fund was modeled after the ones that exist in Iraq and Afghanistan, where money was allocated to help alleviate the suffering of civilians harmed by US military operations as part of a strategy to “win hearts and minds.” In the case of Pakistan, where the CIA operates its drones, the money is supposed to go directly to the families of innocent drone victims, or for needs like medical expenses or rebuilding homes.

But Tim Rieser, the long-time staffer for Senator Patrick Leahy who has worked to get this Pakistani civilian assistance fund included in the yearly Foreign Operations budget, expressed his exasperation about the use of the funds. “It’s been like hitting a brick wall every time we push the administration to use these funds for drone victims, since for years they wouldn’t even acknowledge the existence of drone strikes,” said Rieser. “I seriously doubt that any of this money has reached the victims it was intended to help.”

Instead, it appears that the Conflict Victims Support Fund gets farmed out to US-based non-governmental organizations like International Relief and Development that, after taking their cut, provide humanitarian assistance for Pakistanis who are not drone victims and are not even living in the tribal areas of Waziristan where the US is carrying out the strikes.

Sarah Holewinski, the executive director of Civilians in Conflict, agrees with Rieser that the funds are being misused. “Sure, it’s not easy to assess damage and compensate families in Pakistan where there are no boots on the ground to do a military investigation and where the drone operations are covert,” said Holewinski. “But the State Department does have personnel in Pakistan, including AID staff, and they could work with communities to figure out what harm occurred, why, by whom, and then determine what the civilians need/want/expect in order to feel dignified and assisted.”

Doing this, however, would require cooperation from the CIA, which carries out the drone strikes while refusing to talk about them, and it would contradict the US government assertion that the drone strikes have caused only a handful of civilian casualties.

To make up for the US lack of help, the Pakistani government says it steps in to offer assistance. But the victims covered in the Amnesty report said they either did not receive compensation from the Pakistani government or that it was inadequate. The family of 68-year-old Mamana Bibi, who was killed in North Waziristan while tending her crops, was furious when they were offered $100, given that their costs for medical expenses, repairs to their home and loss of livestock totaled about $9,500.

A 45-year-old Pakistani farmer told investigators of another report, Living Under Drones, that after his home was destroyed by a drone, he didn’t have the $1,000,000 rupees [US $10,500] to build a new house, so he and his family live in a rented room. “I spent my whole life in that house, my father had lived there was well….I belong to a poor family. I’m just hoping that I somehow recover financially,” he said.

If this farmer had lived in Afghanistan and had been harmed by a drone, he would have been entitled to compensation for loss of life, medical problems and/or property damage. The payments in Afghanistan are usually small (about $5,000 for a death or injury or $5,000 for property damage), but this can make a big difference to a poor family. But next door in Pakistan, there is no help. This inconsistency is the reason staffer Tim Reiser pushed for the Pakistan fund and now thinks a Yemen fund should be created. “Anywhere innocent people are harmed due to our mistakes, we should help them out,” says Rieser. Even John Brennan, CIA chief who is the mastermind of President Obama’s drone policy, said during his confirmation hearing that he thought the US should offer condolence payments—in fact, he thought the US was already doing that.

Most activists in the US and abroad are focusing, rightly so, on trying to stop the drone killing spree. But those already harmed deserve help. Mohamad al-Qawli, who just formed a network of drone strike victims in Yemen, thinks it’s the least the US should do. Al-Qawli’s brother was killed in a drone strike, leaving behind a distraught wife and three young children. “In our tribal culture, if someone commits a crime or makes a terrible mistake, they have to acknowledge the wrongdoing, apologize and provide restitution. The US government won’t even acknowledge the wrongful death of my brother, much less apologize and compensate his family. Could it be that my tribal culture is more evolved than the justice system of the United States?” Al-Qawli asks.