3 Years War? Obama to Bomb Syria in Fight Against ISIL 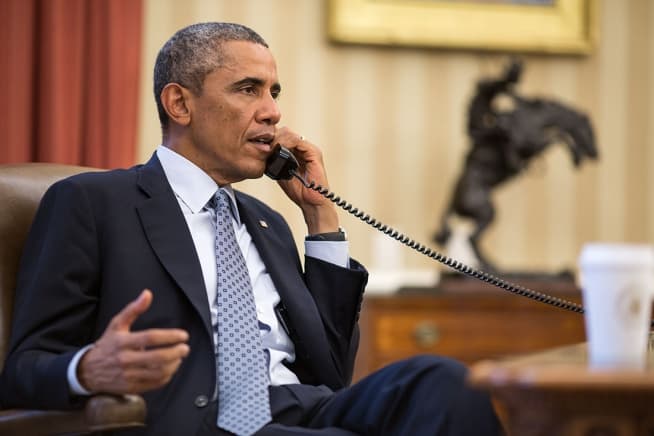 Juliet Eilperin and David Nakamura at WaPo report on a Monday evening dinner at the White House attended by foreign policy experts, in which President Obama expressed confidence that he had the authority to bomb ISIL positions in Syria.

In other reports, Obama officials have leaked that they think this is a 3 years war. (Ronald Reagan began vastly increasing the aid to Afghan rebels against the then Communist government in Kabul in 1982, and US counter-terrorism and counter-insurgency in that country is still going on in 2014, 32 years later; so three years have a way of becoming multiplied by 10).

Everyone should just understand that the social science literature finds that external interventions typically extend, not shorten, civil wars, as Marc Lynch has pointed out.

At the same time, Obama appears to envisage arming and training the “moderates” of the Free Syrian Army, who have consistently been pushed to the margins by al-Qaeda offshoots and affiliates. Private billionaires in the Gulf will continue to support ISIL or its rival, Jabhat al-Nusra (the Succor Front, which has pledged allegiance to al-Qaeda). Strengthening yet another guerrilla group will, again, likely prolong the fighting. Moreover, in the past two years, Free Syrian Army moderate groups have gone radical and joined Nusrah or ISIL at an alarming rate. Defectors or defeated groups from the FSA will take their skills and arms with them into the al-Qaeda offshoots.

In Iraq, while giving the Kurds and the Iraqi army close air support against ISIL has already borne fruit when the local forces were defending their ethnic enclaves, it hasn’t helped either largely Kurdish forces or the (largely Shiite) Iraqi army take Sunni Arab territory. Several campaigns against Tikrit have failed. The only thing worse than this failure might be success.

Success would mean smart phone video making its way to YouTube showing US bombing urban residential buildings full of Sunni Arab families in support for a motley crew of Kurdish (non-Arab) fighters and Shiite troops and militiamen. Helping such forces take Tikrit, the birthplace of Saddam Hussein, would make for a very bad image in the Sunni world.

US hopes of enlisting Sunni “tribes” led by people like Ahmad Abu Risha are probably not very realistic. Sunni notables in the cities and ex-Baath officers need to be convinced to break with ISIL. One might ask where all the Iraq oil money has gone. With Brent crude mostly over $100 a barrel in recent years, and Iraq exporting 3 mn barrels a day or so, the government should be enormously wealthy. But Sunni Arabs complain of poverty, unemployment and no services or electricity. What’s wrong with this picture? Inefficiency and corruption are part of the story of the disaffection of the Sunnis in Iraq; and those faults are in the main US ally!

Giving close air support to Middle Eastern groups requires US special forces on the ground, to paint lasers on the targets. And if the campaign isn’t finished in 3 years, there will be pressure from Washington hawks to commit troops (there already is). Governments don’t like to be seen failing, and sometimes will double down in a gamble.

Juan Cole teaches Middle Eastern and South Asian history at the University of Michigan. His new book, The New Arabs: How the Millennial Generation Is Changing the Middle East (Simon and Schuster), will officially be published July 1st. He is also the author of Engaging the Muslim World and Napoleon’s Egypt: Invading the Middle East (both Palgrave Macmillan). He has appeared widely on television, radio and on op-ed pages as a commentator on Middle East affairs, and has a regular column at Salon.com. He has written, edited, or translated 14 books and has authored 60 journal articles. His weblog on the contemporary Middle East is Informed Comment.