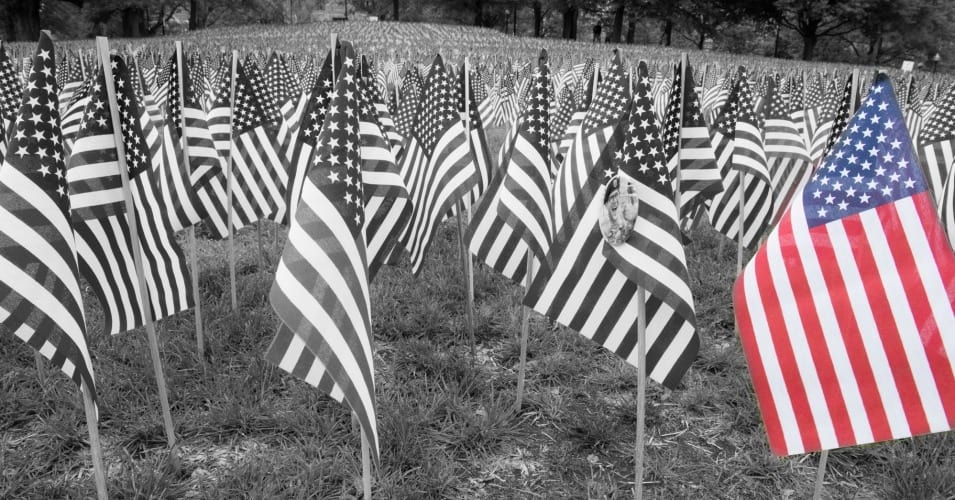 Memorial Day is, by federal law, a day of prayer for permanent peace. But is it possible to honestly pray for peace while our country is far and away number one in the world in waging war, military presence, military spending and the sale of weapons around the world?

The US has 1.3 million people in the military and another million serve in the military reserves.  The US has over 700 military bases in 63 countries across the world deploying over 255,000 US military personnel there.  TheDepartment of Defense officially manages over 555,000 buildings on 4400 properties inside the US and in over 700 properties across the globe.   The US has over 1500 strategic nuclear warheads, over 13,000 military aircraft,  dozens of submarines, many of which carry nuclear weapons, and 88 huge destroyer warships.

Nearly 7000 US military people died as a result of the wars waged by the US since 9/11.  Just as important, in Iraq over 216,000 combatants, most of them civilians, have died since the 2003 invasion.   No one even counted civilian deaths in Afghanistan for the first five years of our war there.  Our drone attacks have murdered hundreds of children and hundreds of civilian adultsin Pakistan and dozens more in Yemen.

Since 9/11 US spending on our military cost well over $3 trillion.  Direct combat and reconstruction costs for wars in Afghanistan and Iraq since 9/11 have officially cost US taxpayers $1.6 trillion dollars according to theCongressional Research Service.   Additional trillions have been spent on growing the Pentagon budget and for present and future increased health and disability benefits for veterans.

With these trillions being spent on war, there are legions of corporations profiting.

The number one war profiteer is Lockheed Martin, according to USA Today, with annual arms sales of $36 billion.  Not surprisingly Lockheed Martin spends over $14 million a year lobbying the people who make the decisions about how much money is spent on weapons and which weapons will be purchased.  Their CEO is paid over $15 million, according to their 2015 shareholder report, and on their board is James Ellis, a former Admiral and Commander in Chief of US Strategic Air Command, who gets paid over $277,000 for the part time work and James Loy, former Deputy Secretary of Homeland Security, who gets over $260,000 for his part time work.  Lockheed receives substantial government contracts amounting, by one calculation, toover $260 from each taxpaying household in the US.  They are so entitled that a 2014 special investigation by the US Department of Energy found Lockheed used taxpayer funds to lobby for more taxpayer funds.

Number two war profiteer is Boeing with annual arms sales of $31 billion.  Boeings spends over $16 million a year lobbying. The rest of the top ten corporations profiting from war include BAE Systems, General Dynamics, Raytheon, EADS, Finmeccanica, L-3 Communications, and United Technologies.  You can track their corporate contributions to members of Congress, especially the politicians on the Appropriations Committees of the House and Senate on Open Secrets.

While most of the lobbying money has gone to Republicans, all the arms merchants hire lobbyists who can influence Democrats and Republicans, according to the Center for Responsive Politics.

And these war profiteers do not just sell to the US government.  The US sold more than $26 billion in weapons to foreign nations and has been number one for a long time though recently that title has been going back and forth with Russia as to which is the world biggest international arms merchant.

On April 4, 1967, in his famous Riverside Church address, Martin Luther King Jr. said the US government was the greatest purveyor of violence in the world.  In response he called for a true revolution of values.  This revolution calls us to question the fairness and justice of many of our past and present policies including war and the contrast of wealth and poverty in our own country and across the world.

Former US President and General Dwight Eisenhower warned citizens as he left office of the growing military industrial complex.  He saw the influence of the war machine and urged all citizens to be alert and force “the huge industrial and military machinery of defense” to respond to democracy and the peoples’ desires for peace.

What must we do?  First, we must learn the facts and face the truth that the US is the biggest war maker in the world.  Second, we must commit ourselves and organize others to a true revolution of values and confront the corporations and politicians who continue to push our nation into war and inflate the military budget with the hot air of permanent fear mongering.  Third, we must admit what our country has been doing wrong and we must make amends for the violence the US has waged on countries all over our world.  Fourth, we must withdraw our military from all other countries, dramatically downsize our military, disarm our nuclear weapons, and truly stick to defending our own country.  Fifth, we must work for peaceful, just solutions for conflict here at home and across our world.  Only when we work for the day when the US is no longer the world leader in war will we have the right to pray for peace on Memorial Day.

Bill Quigley is Associate Director of the Center for Constitutional Rights and a law professor at Loyola University New Orleans.  He is a Katrina survivor and has been active in human rights in Haiti for years. He volunteers with the Institute for Justice and Democracy in Haiti (IJDH) and the Bureau de Avocats Internationaux (BAI) in Port au Prince. Contact Bill at quigley77@gmail.com