2 ½ Minutes to Midnight – Our World in Peril 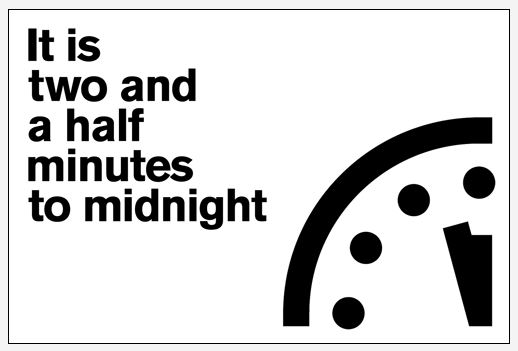 The Bulletin of Atomic Scientists announced Thursday its latest nuclear Doomsday Clock. In so doing they moved the symbolic minute hand ahead thirty seconds to two and one-half minutes till midnight.  Midnight represents nuclear apocalypse. The decision to move the minute hand is made by the Bulletin’s Board of Directors in consultation with its Board of Sponsors, which includes 15 Nobel Laureates. The Clock has become a universally recognized indicator of the world’s vulnerability to catastrophe from nuclear weapons, climate change, and emerging technologies in the life sciences.

This is the first time the clock has moved 30 seconds and is the 19th time since its inception in 1947 that the time has been changed.

In moving the hand to 2 1/2 minutes to midnight the clock setting is the closest it has come to midnight since 1953, when scientists moved it to two minutes from midnight after seeing both the U.S. and the Soviet Union test hydrogen bombs. It remained at that mark until 1960.

Rachel Bronson executive director or the Bulletin said in making Thursday’s announcement, “Make no mistake, this has been a difficult year.”

Explaining its move, the Bulletin’s Science and Security Board said:

Over the course of 2016, the global security landscape darkened as the international community failed to come effectively to grips with humanity’s most pressing existential threats, nuclear weapons and climate change … This already-threatening world situation was the backdrop for a rise in strident nationalism worldwide in 2016, including in a U.S. presidential campaign during which the eventual victor, Donald Trump, made disturbing comments about the use and proliferation of nuclear weapons and expressed disbelief in the overwhelming scientific consensus on climate change.

Nuclear weapons and climate change represent a clear and present danger. Retired Marine Corps General Anthony C. Zinni,  former commander of U.S. forces in the Middle East has stated, “We will pay for climate change one way or another. We     will pay to reduce greenhouse gas emissions today, and we’ll have to take an economic hit of some kind. Or, we will pay the  price later in military terms. And that will involve human lives. There will be a human toll.”

We know what needs to be done and how to do it yet no one in a leadership role has shown the political courage to take the necessary steps. Nuclear weapons are not even on the radar of our congress. There phones are not ringing off the hook about nuclear weapons. However, new legislation introduced this week by Rep. Ted W. Lieu (D-CA) H.R. 669 and Sen. Edward  Markey (D-Ma) S.200, would block the president from using nuclear weapons first in a crisis, without a vote. Nuclear weapons and climate change are not Democratic or Republican, Blue or Red issues. They are survival issues.

The time to ban nuclear weapons is now.  Today’s announcement by the Bulletin further corroborates the dangers confirmed by recent climate science. Even a small regional nuclear war using just 100 Hiroshima size bombs out of the 15,000 weapons in today’s global stockpiles would potentially kill up to 2 billion on the planet from the climate change and global famine that would follow. There is no escaping the global impact of such a small regional nuclear war.

There is no adequate medical or public health response to an attack on one of our cities by even the smallest nuclear device. We cannot prepare and plan for the outcome of a bomb detonation. Prevention is the only option for risks we cannot cure. This is our prescription for survival. We all must play a part in this abolition movement. Remaining silent is not an option.

The people of the world are making their voices heard and demanding a change of course from the status quo. The United Nations will negotiate a nuclear weapons ban treaty this year to be signed in early July.  This treaty will put nuclear weapons in the same illegal status as other weapons of mass destruction including biologic, chemical weapons and landmines. At that point nations who maintain nuclear arsenals will be pariah nations outside the realm of international law.

We the people must take action for our future and that of our children and planet. It is time to call our representatives and demand action to abolish nuclear weapons and to stop the new nuclear arms race we are embarking on. They can be contacted at (https://www.usa.gov/elected-officials)The time for action is now, before it is too late. What will you do? It’s

Robert Dodge is a family physician practicing full time in Ventura, California. He serves on the board of Physicians for Social Responsibility Los Angeles serving as a Peace and Security Ambassador and at the national level where he sits on the security committee. He also serves on the board of the Nuclear Age Peace Foundation and Citizens for Peaceful Resolutions. He writes for PeaceVoice.