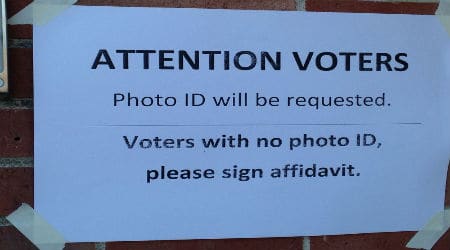 The GOP shows no signs of letting up on its campaign to restrict voting rights. Republican states have already passed more restrictions in 2017 than they did in ’16 and ’15 combined.

“We’re moving into a pre-Voting Rights Act era, where there isn’t any real watchdogging of elections and changes to election laws,” says Albrecht. “States, including Wisconsin, are making maverick changes that have a significant impact on populations that have been historically disenfranchised. “The GOP shows no signs of letting up on its campaign to restrict voting rights. Attorney General Jeff Sessions has reversed the Obama administration’s opposition to a restrictive voter ID law in Texas and voter purging in Ohio. And the request by Trump’s Presidential Advisory Commission on Election Integrity for the voter data of every American has led thousands of voters to unregister in swing states like Colorado and sparked fears that the administration will propose new policies to undermine access to the ballot at the federal and state levels. Emboldened by these efforts, Republican-controlled statehouses have already passed more voting restrictions in 2017 than they did in 2016 and 2015 combined. CONTINUE READING