Intel Report: ‘The Time is Golden and Now’ – Single-Payer Bill Advances in California 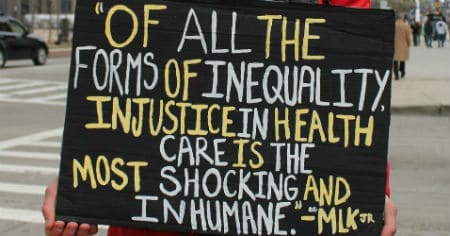 With close to 1,000 supporters rallying outside, California’s Senate Health Committee on Wednesday advanced a single-payer healthcare bill that has been described as a potential “catalyst for the nation.”

The Healthy California Act (SB562) would create a universal health system (covering inpatient, outpatient, emergency care, dental, vision, mental health, and nursing home care) for every California resident. Unveiled last month, the bill has the support of National Nurses United and the California Nurses Association, who held a rally at the Sacramento Convention Center Wednesday followed by a march to the state capitol and a presence in the committee room.

John Conyers’ Medicare for All bill (HR 676), which he has introduced in each Congress since 2003, has seen a recent surge of new cosponsors — 32 since March 8 and nine on April 3 alone. As of this writing there are 93 co-signers (and counting), representing more than 48 percent of the Democratic Caucus. This is the highest number of cosponsors ever, both in terms of members and as a percentage of the House Democratic Caucus.

“If Republicans announce their intention to bring their harmful TrumpCare bill to the House Floor tomorrow or Saturday, I will oppose a one-week continuing resolution and will advise House Democrats to oppose it as well,” Hoyer said in a statement on Thursday. “Republicans continue to struggle to find the votes to pass a bill that will kick 24 million Americans off their health coverage, allow discrimination against those with pre-existing conditions, and impose an age tax on older Americans.”