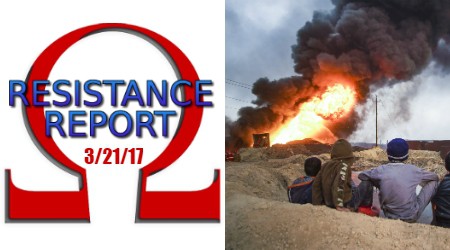 Kathy Kelly, Common Dreams: Reality and the ‘Made in the U.S.A.’ Famine in Yemen

The attack on Yemen traps both Yemenis and fleeing Somalis in the worst of four developing crises which collectively amount, one U.N. official warns, to the worst humanitarian crisis in the history of the U.N. This was accomplished with massive, ongoing weapons shipments from the U.S., which has also waged independent airstrikes that have killed dozens of civilians, including women and children.

The Trump administration is considering weakening or withdrawing Obama’s rules, which, while flawed, are intended to limit civilian deaths and injuries. Without them, the U.S. will further unmoor itself from domestic and international law that safeguards against extrajudicial killing, and many more innocent people will die.

One imagines that there must be a Department of Defense Dictionary, kept under lock-and-key in the Pentagon, that dispenses with the bland language and penchant for deceptive euphemisms. That dictionary would define an “Area Of Responsibility” as “a vast expanse within which the United States seeks to impose order without exercising sovereignty.” An AOR combines aspects of colony, protectorate, and contested imperial frontier.