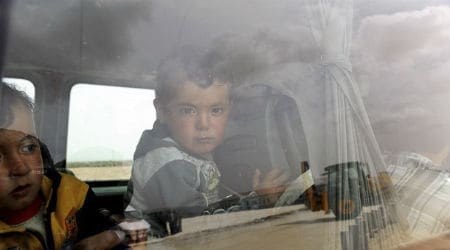 Last month, Europol announced that 10,000 children entering into Europe have “disappeared”. News sources are now talking about these children as “missing”. When stories are told far away from the place where they occurred, sometimes the story itself warps reality. Or maybe, when we hear a story told over and over in the same way, it becomes the reality we believe. Perhaps the problem is the story that is not being told.

The current crisis caused by the large influx of refugees from Syria, Afghanistan and Iraq has exposed the complete hypocrisy of the European Union. Policies and directives formulated in Brussels have no value in national systems, as all countries struggle to pass the “hot potato” of responsibility to the country next door.

These children are not vanishing, as if by act of magic. The Member States are failing to protect their rights. There aren’t effective mechanisms to identify unaccompanied minors entering into Europe or potential trafficking victims. The lack of access to asylum and other protections is leaving thousands of children in highly vulnerable situations. This is not just a humanitarian crisis. We are witnessing a series of gross human rights violations. Lets call things by their real name.

The story that is not being told is that the European Member States individually, and the European Union collectively, are systematically violating fundamental human rights. They are letting men, women and children drown at sea or die of cold. Because states are offering no protection, women and girls are being raped and subjected to sexual violence. They have no access to urgently-needed sexual and reproductive health services. Pregnant women have no access to health care. Children fall prey to trafficking mafias. These are the basic human rights that are being violated in Europe due to the lack of due diligence.

The system is broken. The current crisis is putting the spotlight on it, making it impossible to ignore. In European Member Border States, such as Spain, where I live, human rights defenders have witnessed as countless unaccompanied minors, migrant women and trafficking victims are either treated as criminals, or left unprotected without access to justice.

This entire time, because of this negligence, migrant and refugee children have been “disappearing”. My organization, Women’s Link is in the middle of a fact-finding investigation that is documenting how women that are trafficked into Spain are consistently separated from their minor children, either by the State or their traffickers, often forever. The women are then moved on to other countries in Europe by the mafias. The fate of their children often remains unknown to them.

Our work is a part of the extensive and thorough documentation that has been done by human rights organizations showing how Member States are falling short in their human rights obligations because they aren’t being held accountable. Now, we have news that 10,000 children are “missing” because of the lack of any access to the basic rights that the European Union allegedly protects in numerous national, regional and international instruments.

Now that we know the story, how do we hold those responsible accountable?