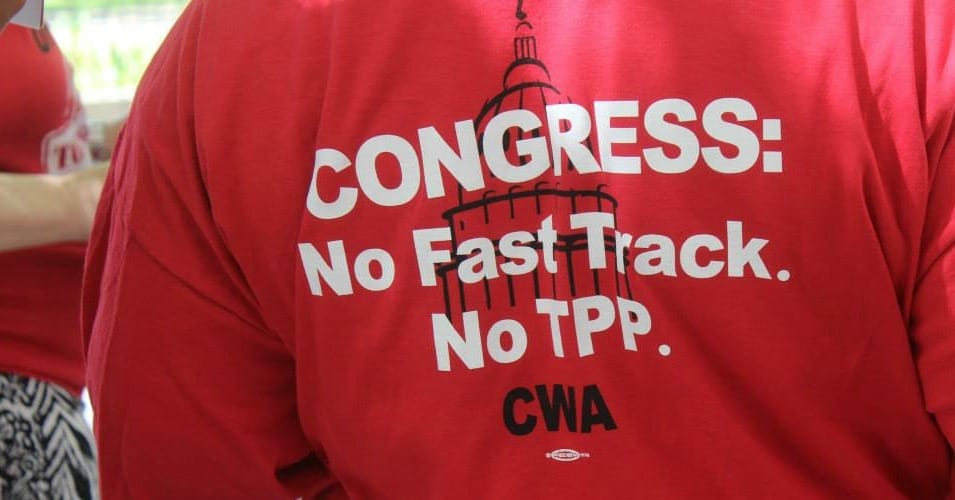 “We have an opportunity to set the most progressive trade agreement in our nation’s history,” it states on BarackObama.com, the website of the president’s “Organizing for Action” campaign.

One must seriously question what President Obama and his corporate allies believe to be the definition of “progressive” when it comes to this grandiose statement. History shows the very opposite of progress when it comes to these democratic sovereignty-shredding and job-exporting corporate-driven trade treaties — unless progress is referring to fulfilling the deepest wishes of runaway global corporations.

The Trans-Pacific Partnership (TPP) is formally described as a trade and foreign investment agreement between 12 nations — Australia, Brunei, Canada, Chile, Japan, Malaysia, Mexico, New Zealand, Peru, Singapore, the United States and Vietnam. The White House is now pressuring Congress to Fast Track through the TPP. Fast Track authority, a Congressional procedure to limit time for debate and prohibit amendments to proposed legislation, has already passed in the Senate, although only after an unexpectedly rough ride.

Here are 10 reasons why the TPP is explicitly not a “progressive” trade agreement:

1. Over 2000 progressive groups recently sent a letter to members of Congress opposing fast track. “Fast Track is an abrogation of not only Congress’ constitutional authority, but of its responsibility to the American people. We oppose this bill, and urge you to do so as well,” the letter reads. See it in full here. On the other hand, supporters of the TPP and its autocratic, secret transnational governance, include Wall Street, Big Pharma, Big Ag, oil/gas and mining firms, and the Chamber of Commerce–in short the plutocracy does not tolerate voices and participation by the people adversely affected.

2. Only six out of the 30 total chapters in the TPP have anything to do with trade. So what makes up the bulk of this agreement, which was shaped by 500 U.S. corporate advisors? Jim Hightower writes: “The other two dozen chapters amount to a devilish ‘partnership’ for corporate protectionism. They create sweeping new ‘rights’ and escape hatches to protect multinational corporations from accountability to our governments… and to us.”

3. After six years of secret negotiations, Fast Track legislation would allow President Obama to sign and enter into the TPP before Congress approves its terms. It then requires a vote 90 days after submission of this Fast Track legislation on the TPP itself and changes in existing U.S. laws to comply with its terms. No amendments would be allowed and debate would be limited to a total of only 20 hours in each chamber of Congress. By limiting debate and preventing any amendments to the agreement, Fast Track prevents challenges to any issues about how America conducts business with the countries included in the TPP. Some of the countries in the TPP — Brunei, Malaysia, Mexico and Vietnam, for example — have terrible human and labor rights records. Those conditions attract big companies looking for serf labor and their accommodating governments.

4. Millions of U.S. manufacturing jobs have been lost due to NAFTA and WTO being railroaded through Congress. The TPP would only expand these offshoring incentives. These types of deals ultimately increase the income inequality gap by displacing well-paid middle-class workers, negating any benefit to lower prices of goods. According toa report for the Center for Economic and Policy Research (CEPR), the TPP would result in wage cuts for all but the wealthiest Americans.

5. The American people have yet to see the full text of the TPP — it has been negotiated in secret and shown to members of Congress under demeaningly strict secrecy. We only know about some of its terms because of leaks. But Wall Street and industry operatives, who seek to benefit enormously from the TPP, do have access to the text. Why so selectively secretive? Supporters of the deal outright told Senator Elizabeth Warren, “[trade talks] have to be secret, because if the American people knew what was actually in them, they would be opposed.”

6. The TPP allows corporations to directly sue our country if federal, state or local laws, government actions or court rulings are claimed to violate new rights and privileges the TPP would grant to foreign firms. Firms from TPP nations operating here could attack U.S. regulations over cancer-causing chemicals or environmental concerns before tribunals comprised of corporate lawyers that rotate by day and night between acting as “judges” and representing corporations attacking governments. These decisions then cannot be challenged in U.S. courts — and U.S. taxpayers will get stuck with the bill. So much for our precious sovereignty!

7. The proponents of the TPP claim that it will raise labor and environmental standards. However, the labor and environmental standards included in the TPP are equivalent (or less stringent) to modest ones agreed upon by House Democrats and President Bush in May 2007 in trade agreements with Peru, Panama and Colombia. These provisions have not been effective — Peru has since undermined these laws, and the Obama Administration has done nothing to enforce them. Nothing in the TPP suggests the unenforceable rhetoric– cited by President Obama — will be any different now.

8. TPP will further weaken America’s regulatory watchdogs — we can’t use our own government to over-rule TPP tribunal decisions that over-rule our health, safety and economic protections as non-tariff trade barriers. Senator Elizabeth Warren told POLITICO: “This deal would give protections to international corporations that are not available to United States environmental and labor groups. Multinational corporations are increasingly realizing this is an opportunity to gut U.S. regulations they don’t like.” Keeping the United States from being first in health and safety protections is un-American.

10. The TPP could potentially undermine reforms of Wall Street and threaten U.S. financial stability by providing the institutions that caused the 2008-2009 financial crisis a path to circumvent U.S. regulations, such as limiting capital controls and prohibiting any taxes on Wall Street speculation. See the letter sent by Senators Warren, Markey and Baldwin last year to U.S. Trade Representative Michael Froman.

Ralph Nader is a consumer advocate, lawyer, and author. His latest book is The Seventeen Solutions: Bold Ideas for Our American Future. Other recent books include, The Seventeen Traditions: Lessons from an American Childhood, Getting Steamed to Overcome Corporatism: Build It Together to Win, and “Only The Super-Rich Can Save Us”(a novel).