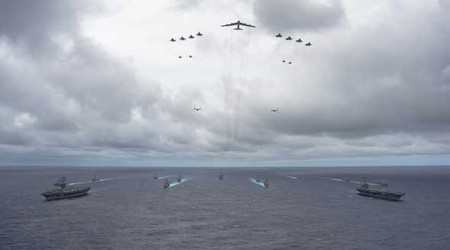 Veteran foreign correspondent Reese Erlich was in northern Iraq at the start of the U.S. bombing campaign against Islamic State. He interviewed Kurdish leaders, peshmerga fighters and U.S. officials. He says the reality on the ground is far different from the propaganda coming out of Washington.

1. Islamic State presents an immediate threat to the people of the U.S.

In justifying air attacks on Syria on Sept. 23, President Barack Obama said, “We will not tolerate safe havens for terrorists who threaten our people.”

I saw firsthand the tens of thousands of Yazidis forced to flee Islamic State fighters. IS is a vicious, un-Islamic, ultra-right-wing group that poses a real threat to the people of Syria and Iraq. But those people will defeat IS, not the U.S., whose motives are widely questioned in the region. IS poses no more of a terrorist threat to the American people than al-Qaida and its offshoots.

In fact, within a matter of weeks, the Obama administration admitted that IS posed little terrorist threat to the U.S. mainland and focused instead on a heretofore-unknown group that the U.S. calls Khorosan. Now evidence is emerging that the Khorosan threat was exaggeratedin order to justify expanding the bombing to Syria.

2. The U.S. is not waging war, but a “counterterrorism operation.”

Both the Bush and Obama administrations have managed to redefine war to mean only those conflicts in which Americans die and the fighting costs over $10 billion. But from inside northern Iraq, what I saw sure looked like war. U.S. bombs have already killed civilians, particularly in Syria, where the U.S. has limited or no on-the-ground intelligence.

Once again, the U.S. is waging an open-ended war with no concern for the long-term well-being of the people in the region.

The United States already has combat troops in Iraq. A U.S. diplomat acknowledged to me that American spotters in the Kurdish region of Iraq provide coordinates for airstrikes. He said U.S. advisers are armed and would shoot if attacked. If insurgents down an American plane, armed U.S. helicopter teams would go into enemy territory to rescue pilots. By redefining “combat troops,” the U.S. not only wages war in the Middle East, but on the English language.

Just one week into the bombing campaign, Joint Chiefs Chairman Martin Dempsey said the U.S. might have to introduce ground combat troops into Iraq. The White House quickly disavowed the statement, but leading Democratic and Republican hawks are already pressuring Obama to formally introduce combat troops. As the air war proves incapable of destroying IS, the administration will likely introduce more ground troops, perhaps renaming them “limited, temporary, counterinsurgency advisers.”

4. The U.S. has formed a viable coalition to defeat Islamic State.

But the U.S. remains the main military power and directs the air strikes. Somebody will have to fight IS on the ground, and the coalition allies certainly won’t. In Iraq, the newly formed government of Prime Minister Haider al-Abadi has little support from Sunnis and Kurds, two vital components of any future viable regime. Abadi’s cabinet actually has fewer Sunni ministers than the previous, discredited government of Nouri al-Maliki.

The American alliance with Israel and Sunni-led countries such as Saudi Arabia only angers the Iraqi government, which remains closely allied with Iran. This coalition, like the phony “Coalition of the Willing” in 2003, is doomed from the start. The U.S. will fund and fight this war until organized opposition stops it or the public becomes exhausted. The Obama administration has apparently forgotten that unrestrained military spending in the 2000s helped precipitate the worst economic crisis since the Great Depression.

5. The U.S. can fight IS and other extremists without simultaneously helping Bashar Assad, Iran and Hezbollah.

One year ago, the Obama administration was beating the war drums against Syrian President Bashar Assad’s alleged use of chemical weapons. Now the U.S. is bombing insurgents opposed to Assad. At the moment the Syrian civil war is a zero sum game. Weakening Assad’s enemies strengthens Assad’s regime. Assad, and his allies Iran and the Lebanese Hezbollah, are pleased with U.S. attacks on IS. But if ultra-right-wing rebels are weakened, pro-U.S. rebels won’t fill the gap. How long will it take for the U.S. to start bombing Syrian army targets?

6. The U.S. supports only moderate rebels.

Contrary to conservative criticism, the Obama administration has tried to create pro-U.S. civilian and armed groups. Obama has failed, not because of “lack of leadership” but because Syrians won’t accept U.S. policy. In my interviews inside Syria and neighboring countries, Syrian rebels and opposition activists made clear they opposed the U.S. wars in Iraq and Afghanistan, and Washington’s total support for Israel. Every Syrian I ever met wants Israel to return the Golan Heights seized in 1967, for example, but the U.S. isn’t interested in having that discussion.

Meanwhile, American allies such as Saudi Arabia have armed extremistssuch as the al-Nusra Front, a group affiliated with al-Qaida. Saudi Arabia’s ultra-right-wing interpretation of Islam shares many ideological similarities with al-Nusra and IS. Yet the U.S. plans to have Saudi Arabia train “moderate” Syrian rebels, which is like asking Al Capone to train Chicago police cadets.

7. The U.S. fights to defend human rights and the rule of law, not oil.

Syria and Iraq have faced massive humanitarian crises for the past three years. Yet the U.S. directly intervened militarily only when the oil-rich Kurdish region of Iraq was threatened. Kurdistan contains the world’s ninth-largest reserves of oil and could eventually replace Russia as a major supplier of oil and gas to Europe. Over 50 foreign oil companies now have offices in Kurdistan, many cutting highly profitable oil production deals with Kurdish officials. Some oil company executives unabashedly call for more military support for an independent Kurdistan.

Oil is only one factor, however. The U.S. also wants friendly governments in Baghdad and Damascus. A few more military bases in the region wouldn’t hurt either. Whatever combination of economic and geopolitical motivations there may be for the latest war, respect for human rights is not among them.

8. President Obama has the legal authority to bomb both Iraq and Syria.

The Obama administration claims authority to wage the current war based on the 2001 congressional vote authorizing action against al-Qaida for its 9/11 attack. Of course, IS is not part of al-Qaida, and the 2001-era al-Qaida led by Osama bin Laden no longer exists, proving once again that those in power can get their attorneys to find a legal justification for anything.

9. The Kurdish leaders are staunch allies against IS.

In June, the Kurdish peshmerga didn’t fight IS when it seized Mosul and other Sunni areas of Iraq. In fact, leaders of the ruling Kurdish Democratic Party met secretly with Sunni tribal leaders allied with IS to work out a non-aggression agreement.

Because of the collapse of the Iraqi army that month, Kurdish leaders expanded their territory by 40 percent. The peshmerga took control of oil-rich Kirkuk, an area long disputed between Kurds and Arabs. KDP leaders told me they have no intention of returning it to central government control. They are preparing referenda on independence in the newly expanded areas. Only in August, when IS attacked Kurdish-controlled areas and threatened Erbil, did the peshmerga fight Islamic State.

KDP leaders are fighting IS as a tactical step toward establishing an independent Kurdistan. If IS stops threatening Kurdistan, the Kurds have no interest in fighting IS inside Arab parts of Iraq. The U.S. and European powers are providing new arms to the peshmerga. Today they are aimed at IS; tomorrow, the Iraqi army.

10. The U.S. never negotiates ransoms with terrorists, unlike those slippery French.

American leaders claim that the U.S. never pays ransoms for kidnapped citizens, whereas some other countries do. One U.S. military leader even speculated that fewer Americans would be kidnapped because of that policy. It’s another myth.

The U.S. negotiated with the Taliban, possibly using third parties, to free the one American prisoner of war in Afghanistan in exchange for five Guantanamo prisoners. Two of the American hikers held in Iran were released after the sultan of Oman, at U.S. urging, paid Iran what was euphemistically called “bail.”

As a freelance journalist reporting from the Middle East for 28 years, I have a particular interest in the release of kidnap victims. But I’ve also learned that kidnapping is an opportunistic crime. First, the person is snatched. Then the kidnappers figure out the nationality and potential ransom. The kidnappers know the U.S. will OK ransom payments when the pressure is great enough.

But as we saw in Vietnam, Afghanistan and Iraq, U.S. military power has limits. The war will be lost politically. Public opinion will shift against another unnecessary war. And Obama will join Bush as yet another failed, wartime president.
Reese Erlich’s newest book is “Inside Syria: The Backstory of Their Civil War and What the World Can Expect,” Prometheus Books, foreword by Noam Chomsky.